AIB today marked the 25th anniversary of its proud sponsorship of the GAA Club Championship by teaming up with Colm Cooper, Dr Crokes and Kerry footballer; Ronan Maher, Thurles Sarsfields and Tipperary hurler; Paddy McBrearty, Kilcar and Donegal footballer; Shelly Farrell, Thomastown and Kilkenny camogie player and Ryan O’ Dwyer Kilmacud Crokes and Dublin Hurler to launch the 2016/17 GAA and Camogie Club season. The five stars have finished their inter-county season and are now back with their respective clubs preparing for county finals this weekend as the battle of #TheToughest continues.

Proud to be backing both Club and County through its additional sponsorship of the Camogie Club and All-Ireland Football Championships, AIB is especially pleased to continue its sponsorship of the GAA Club Championships for a 25th consecutive year. To celebrate its long standing support of GAA, AIB has announced details of a new GAA reward scheme. Each customer who purchases a new AIB Home Insurance Policy can now nominate their local club to receive a €50 cash reward. There is no limit to the number of nominations a club can receive and the scheme is open to all GAA clubs nationwide. Clubs and customers are encouraged to contact their local AIB branch for more information.

Following an intense summer of highly competitive games that ultimately saw the Dublin footballers retain their All-Ireland title, AIB is returning to its roots, where #TheToughest begins - the AIB GAA Club Championships. As county champions are crowned, the winning clubs from around the country will then prepare for the tough upcoming Provincial round. There is no ‘back door’ from the provincial championships onwards and much of the competition will be played in challenging conditions over the winter months. But it’s these gruelling games that will ultimately see a deserving 18 clubs reach Croke Park next year in the hopes of winning the coveted Junior, Intermediate and Senior Club Championship titles.

“To win an AIB Club Championship would mean everything to me”, Dr Crokes and Kerry star, Colm Cooper said. “It’s so difficult to win because games come thick and fast and you have to be mentally ready for a battle week in, week out. You also have to be physically and mentally tough to endure the difficult winter conditions. To win an All-Ireland with my club would definitely be one of the ultimate achievements for me.” 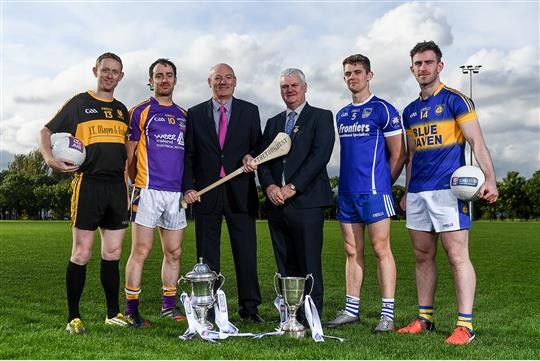 Denis O’Callaghan, Head of AIB Retail Banking, emphasised the importance of AIB’s partnerships with the GAA. “Our sponsorship includes Senior, Intermediate and Junior Championships across hurling, football and camogie and the Senior Football Championship. We are proud to be backing Club and County, and especially pleased to extend our sponsorship of the Club Championships for a 25th consecutive season. The Club Championships is one of the most unique, competitive and toughest competitions to win in sport and we’re proud to be supporting #TheToughest all the way.”

Uachtarán Chumann Lúthchleas Gael Aogán Ó Fearghail said: “This is the time of the year when our clubs, and the players who secure county titles, get the opportunity to represent their counties with distinction. It’s a time of the year that is synonymous with the mobilisation of communities for road trips across provinces.

“The goal of securing provincial honours and ultimately getting to contest the Club titles in Croke Park on St Patrick’s Day is what fuels all of those involved, and we wish all competing clubs well. I would also like to acknowledge the support of AIB who connect our Club Championships and our Inter-County Championships in such a successful and visible way”. Ó Fearghail concluded.

For exclusive content and to see why AIB are backing Club and County follow us @AIB_GAA and at facebook.com/AIBGAA