5 things to watch out for this weekend

Kilkenny travel to Parnell Park this weekend needing a result.
The upside for Ger Cunningham is that his Cuala players will return very soon and should be available even if Dublin are landed in a relegation play-off.

Of course it may take time to gel the team back together, though certainly the likes of Mark Schutte and David Treacy must knit in quickly to add experience to the forward line.

Unusually, the Cats’ scoring has been quite muted as they are currently on -7 after four games, but then it seems to be a wider issue in Allianz 1A. Clare, on +1, have the second best scoring differential behind runaway leaders Tipp on +29. It shows what a tight and unpredictable league it’s been overall.

Kilkenny chairman Ned Quinn was moved to announce “we’re not dead yet” to journalists after the stirring draw in Thurles recently, and it was certainly an excellent display.

The next step for Brian Cody’s men is to address the large scoring issue from open play against the Premier in their two most recent outings, including the All-Ireland final.

A total of 4-36 to 2-19 in favour of Tipp without placed balls included. Perhaps this, more than anything, explains the current lay of the scoring land.

ROSCOMMON SLIDE
John Evans led Roscommon to an Allianz Division Two title in 2015 after beating Down and few of us journalists there will ever forget the following exchange when he was asked how far his team can go.

“The top," said Evans, adding:“The whole idea is to get to the top. It will take us a couple of years.”

Will ye get there?
“Absolutely. It’s a tough question. If we can stay in the first first division for three to four years, if we can stay there the first year and prepare properly we will…"

The top being an All-Ireland?
“Of course it is. There is no other way. Absolutely. I have gone through every team. There is a lot of them and they will be losing a lot of star players over the next two, three, four years. We will be growing in stature.”


Evans had gone from his post by the end of the season, claiming there was a campaign against him. Almost two years on from his All-Ireland declarations, the Rossies look like anything but challengers.
A number of their stars are no longer involved with the panel, ex-boss Guy Sheerin lambasted the Mayo origins of manager Kevin McStay, and the latter was moved to defend himself on TV. Essentially, the fly has moved into the Roscommon ointmenton a full-time basis.

Five defeats from as many games in 2017, a -28 scoring differential, and a trip to Croke Park to face the immovable object. They’ll meet the team any would-be All-Ireland winner would have to topple. This Dublin game may show how far off Roscommon really are. 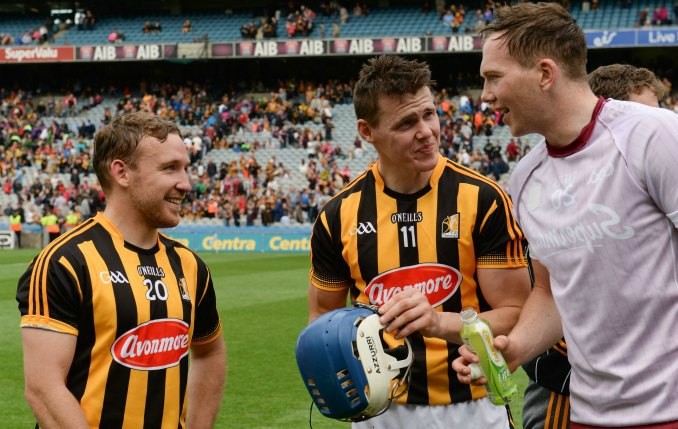 BACKING DUBLIN
Dublin may have the best defence in the country.
No, it’s not the football team being referred to, but the hurling outfit. Eoghan O’Donnell might be the player of the league so far and he had already shown his wares in 2016. As Tipp walloped the Dubs in Croke Park, the full-back rendered Seamus Callanan scoreless, and most recently he dominated Clare’s Aaron Shanagher during a Banner win.

Liam Rushe’s credentials needs little explaining but his completes an exceptional spine of the defence from the centre-back spot. The average hurling fan seems to have good regard for Chris Crummey but to watch him in action for his club is to see how brilliant he truly can be. Certainly those who saw him go on a 60-yard sideline run for Lucan last year, twice flick the ball over would-be tacklers' heads, and then slam it over from the sideline know his quality.

Shane Barrett has been on the scene for a couple of seasons now and notably kept Kevin Moran quiet during a qualifier when the Waterford man had been flying throughout 2015. The Na Fianna man may actually prefer the half-back line, and has been seen excelling at midfield, but again he’s top-notch. Add into that any of Cian MacGabhann, Paul Schutte, Oisin Gough, Sean Moran and Cian O’Callaghan.

Get Cunningham might need a rejig further upfield, but he’s got the makings of an incredible defence.

CHANGING RIVALRY
What is it about Dublin versus Kerry? If you haven’t watched the video lately or at all, it’s worth a look.
It reminds us of a storied history of this rivalry but one that has continued to evolve. Kerry have very much been on the hind tit in recent seasons and somehow failed to beat the old enemy last Saturday.

White line fever, you might call it. Anticipatory anxiety, even. The win was there, the Kingdom had it in their hands, but it got to them. Maybe the physical approach, something that they railed against when Tyrone shoved it into their faces more than a decade ago, is distracting them from their best asset: footballing.

The Dubs have taken margin for error out of their game in so many ways. They run relentlessly, the team always provide options for the ball-carrier, they have amazing subs to come in, and they never panic.

The talk of 34 competitive games unbeaten will continue even if it soon becomes about extending the run. A penny for the thoughts of Longford’s footballers who in 2016 scored a 1-12 to 0-9 win over Dublin in the O’Byrne Cup — a game not counted in this sequence. As many as ten men with All-Ireland final experience played that day under Jim Gavin — which is more than some games during this year’s Allianz league.

As Kerry’s chest tightened towards the final whistle, the Dubs remained serene. Three times they’ve drawn this spring, and surely we have never seen a team top after five games despite winning just twice.
What is it about Dublin, and what is it about Kerry?

The Faithful are in dire trouble because they came out thinking “jaysus, we’re not so bad” after a five-point defeat to Wexford — a side who had all the hard work towards promotion done before that game. The real aim for Offaly is breaking their winless run away to the Kingdom this weekend, and it’s interesting that they’ve been installed as favourites.

It’s a hot-pot of incest at the foot of Division 1B. Eamonn Kelly has managed both Kerry and Offaly and is now in charge of Laois, where he has an incredibly young side.

Seamus ‘Cheddar’ Plunkett had made huge progress in recent seasons but they then took a couple of backward steps with some convincing championship defeats.

A win over Wexford, who are already promoted, would be a good step for the O'Moores but it would have to be viewed through the prism of what the game is truly worth to Davy Fitzgerald.

Contesting a relegation play-off might actually be favourable for two of these three sides at the bottom of 1B — because a double-digit defeat to the Premier is no preparation for championship.