Patrick McBrearty would love if the GAA changed Gaelic football to 13-a-side. No wonder too, because at times marquee forwards such as the Kilcar man are mired in blanket defences.

Gone are the years of attackers being left one-on-one inside, mano-a-mano, and racking up big scores game after game. With the emphasis on defence these days, men of McBrearty’s ilk are being tagged by one player while other defenders stand sentry in front. Ahead of this weekend’s Ulster opener against Antrim, McBrearty will be bracing himself for more of the same.

In an ideal world, there wouldn’t be so many obstacles in front of him. McBrearty says: “I just think they should make it 13-a-side to be honest. “I think 30 players on a GAA pitch is just too much and if you take four away, and leave 12 outfield players each and goalkeepers, it would make it more exciting.

“I don’t think teams could get their blankets back in time, or at least they’ll be leaving one or two forwards up the field. “So you’re down to ten men then instead of 13 or 14. That’s just my view, a forward’s point of view.”

Not that he could see it happening any time soon: “Ah I don’t think the GAA has even thought of it, to be honest. I remember from my underage playing 13-a-side, lots of space.”

When Jim McGuinness took the reins in Donegal, that was seen as the start of the truly defensive football that has since gripped the game. Counties that traditionally played on the front foot — including Kerry — are now hugely conscious of defence. Dublin are one of the few teams who seem to spend most of the time worrying about the other end of the field, though their quality makes that style easier to execute. Still, there’s a feeling that many counties are killing their own chances by neglecting what they might be able to do in front of the posts.

“I think teams just do it because it gives them the best opportunity, to be honest,” says McBrearty. “That’s the way we do it and defence leads into offence, and that’s the motto used a lot in sport.

“If teams think it’s going to keep them in the game for a long time, and then maybe get a goal or two on the hop, on the counter-attack.

“That might be the best way for a team to win a game, whereas going man-on-man against a top team is not going to work.

“Then going negative is just a way to keep in the game and hopefully get a few scores on the board and nick a goal.”

Viewed in that light, to finish third in the league was a strong showing when so much youth was being brought through by Rory Gallagher. The likes of Ciaran Thompson, Jason McGee, Martin O’Reilly and Eoin McHugh have all stepped up as leaders, and optimism is high.

When Michael Murphy said a couple of months ago that they were still looking at the Sam Maguire, it seemed fanciful. But their form has held up well, there is pace in the team, and they still have marquee players across the pitch.

Step one is overcoming the Saffrons ahead of a likely semi-final encounter with Mickey Harte’s Tyrone, who beat them in last year’s Ulster final. 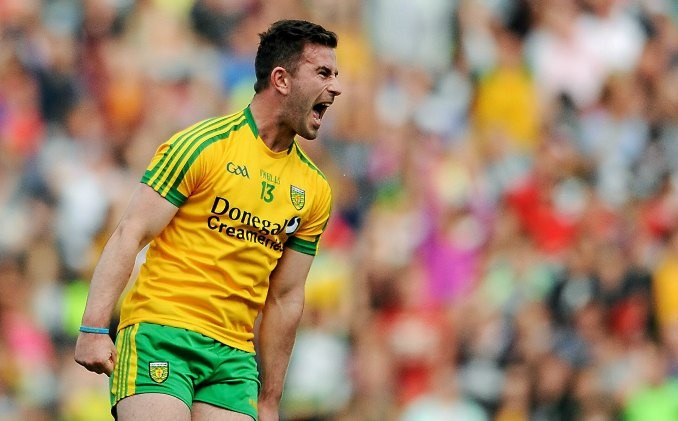 “Yeah, any time we go out onto the pitch, we feel we can beat them [the other challengers],” says McBrearty. “We feel we have a great chance to beat them.

“We have Antrim and hopefully if we get through that, Tyrone could possibly be at the other end and that would be massive.

“Every time we go out on the field, we feel we can beat them and that’s always been our motto. “Nothing has changed there and the young lads that have got through, the experience of the league will be massive. We’re looking forward to the championship because that’s the business end of the season.

“We’re happy enough,” he adds. “We knew going into the league that we had a good enough chance of staying up and we were very comfortable in the end.

“We were a kick of a ball really from going into a league final and it was good to get some of the young lads game-time.

“We had a number of injuries during the league but they’re all fixed up now. We’ve a good base in for the championship and we’re looking forward to Antrim.”