So, the Euro 2016 draw has been made and it certainly won’t be a holiday in France for the Irish team. Martin O’Neill’s men find themselves in Group E alongside world No. 1s Belgium, perennial contenders Italy, and Zlatan Ibrahimovic’s Sweden, a line-up of matches which promises some seriously exciting tests for the boys in green.

If you’re planning a trip to the Euros this summer you’ll now have a better idea of your travel requirements too, with Ireland’s group stage games taking place in Lille, Bordeaux, and Paris. France has a reputation for being expensive, but there are a load of ways to keep a lid on your spending without cutting many corners. Read on for our tips on experiencing the Euros on a budget.

France has one of the world’s most extensive rail systems, and is home to the 200 mph TGV, which can get you from Paris to Bordeaux in a shade over three hours. It always pays to book in advance here, with reductions of up to 50% if you book three months ahead. If you’re 27 or under, you probably don’t remember the glory days of Italia ’90, but you do qualify for a Carte Jeune, which cost €50 and can knock up to 60% off the price of your fare. This is probably a better option if you’re planning a lengthier stay in France, but Ireland are going all the way anyway, right?

If you’re driving from Bordeaux to Lille, motorway tolls could set you back well over €100. If you’re clever about it though, you can make your way north on the Bison Futé network, a government-backed scheme which directs motorists to older, less congested roads based on current traffic conditions. If you fancy really getting to know a local, the popular car sharing site Bla Bla Car connects you with drivers travelling on your preferred route and can make you some serious savings. You could also use this opportunity to brush up on your French vocabulary and do your bit for Franco-Irish relations. Top tip - don’t mention the Henry handball.

Get on Your Bike

All of the host cities that Ireland will be playing in operate bike sharing schemes, and they can be a great way to get around on the cheap while seeing more of the local scenery. The Paris Vélib, V'Lille and Bordeaux schemes offer daily and weekly rentals with prices ranging from €1 to €8. Get yourself a pass and you’ll by cycling by the Seine like a local in no time. Striped shirt and beret optional. 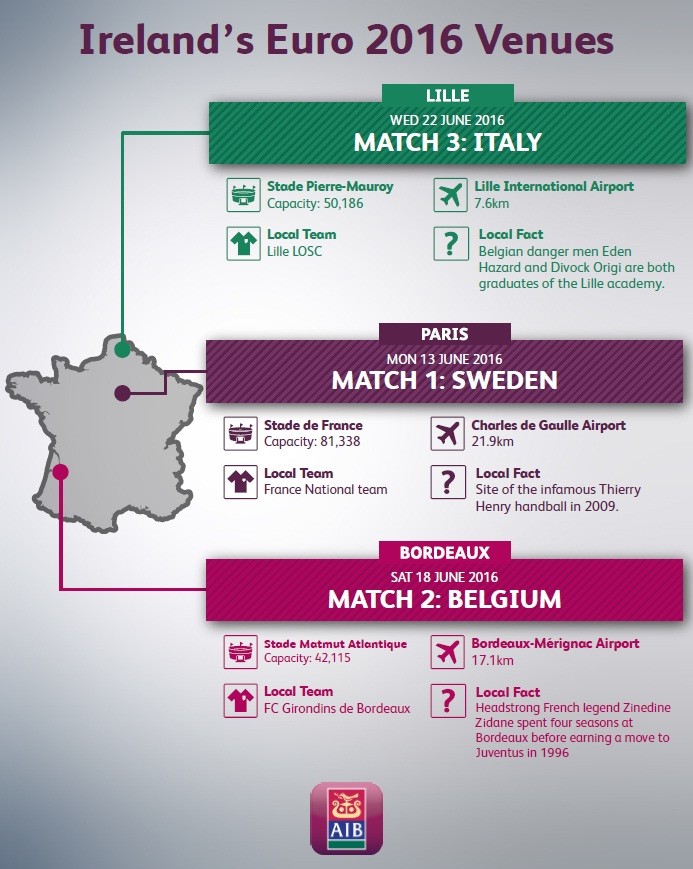 Whether you’re taking a campervan or travelling by public transport, a campsite can be a great accommodation option for the tournament goer who’s looking to save some money. Camping France currently lists aver 10,000 campsites across the country, which vary from humble 1-star offerings to ultra-posh glamping, with corresponding differences in price. For the truly budget conscious, many towns and villages have Municipal campsites which will allow you to pitch your tent for a minimal fee. They won’t boast the facilities of some of the larger (and more expensive) sites, but as an Irish football fan you’ll obviously be used to a bit of adversity.

If you want to avoid the expense of a hotel, Airbnb or a traditional bed and breakfast (Chambre d'hôte) is a great option, and, just like in Ireland, it’s a cost effective way of getting to experience a bit more of the local culture. Chambre d’hotes do tend to be a bit more out of the way, which, depending on your map skills and need for peace and quiet is either a good thing or a bad thing. Unfortunately, we can’t guarantee that early morning requests for a few rashers will be granted. Another croissant?

Dine Out and Save

Eating out in France can be expensive, particularly in Paris, but there are a few tricks you can use to make your euros stretch a little further. When eating in restaurants, the smart option is to go for lunch rather than dinner as most places will offer a reasonably priced two or three course prix fixe option during the day. Outdoor markets can also be a cheap way of picking up an inexpensive lunch, and if you want to save some dough at breakfast, there are patisseries and boulangeries on every corner with delicious pastries and bread for a fraction of the cost you’ll pay in a hotel.

Planning a trip to Euro 2016? Book your place now with a decision on your loan for Euro 2016 in just three hours.