Breaffyhave never won the Mayo SFC title but at the weekend unveiled a secret weapon in a challenge match.

Alas, it was just a one-off appearance by an American football star who won’t be around in the summer when Breaffy bid to go one better having lost the Mayo county final to AIB GAA All-Ireland Club Championships finalists Castlebar Mitchells last year.

Standing at 6ft 4 and weighing nearly 16 stone, Roberto Wallace was the ideal replacement for Breaffy clubman Aidan O’Shea in the full-forward berth as they took on Parke in a challenge match. The 29-year-old former Miami Dolphins wide receiver, may not have made an impression on the scoreboard on Saturday, but his presence will be felt in west Mayo for some time to come.

He arrived in Ireland on February 6th, the day before O’Shea went in the opposite direction as part of ‘The Toughest Trade’ documentary.

‘The Toughest Trade’ is a documentary film commissioned by AIB as part of its #TheToughest campaign. The two-part documentary series will air on RTE 2 in early March ahead of the AIB GAA Club Championship Finals.

Wallace grew up in Panama, and is now a performance trainer after four seasons in the NFL, and another spent north of the border in the Canadian Football League. 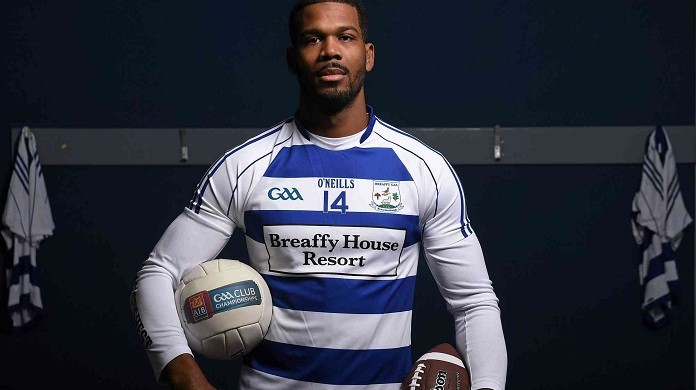 His former agent and good friend, Audie Attar, who talks terms for Conor McGregor, puts the wheels in motion.

“It’s unique, what they do here is not easy, no question. It’s just a little bit different from pro sports being that they have to work and play. They can’t dedicate as much time to their craft.

“I tip my hat off to them, it’s great, but it’s just different. It’s like comparing apples and oranges. They won’t ever be the same, unless this sport goes pro.

“The guys only have so much time in their day to practise and train and play. They still have to work and go and earn their money,” said Wallace.

When he left San Diego State University to join Miami, the minimum salaries for players starting out in the NFL was $390,000 a year. That gets bumped up every season by in excess of $50,000. It highlights the gulf between the professionals, and the amateur athletes of the GAA. But after spending an hour on a wet and soggy surface, in Breaffy’s 4-12 to 2-6 victory, Wallace had even more respect for the GAA die-hards.

“It’s definitely a different experience for me. I haven’t played in any kind of field or pitch like that.

“I definitely have a new appreciation for the sport. I keep stressing it’s not easy. It’s tough, it’s consistent movement, running for 30 minutes, there’s no time-outs, no breaks.

“It’s a tough sport, you’ve got to be able to run in that, bounce in that, shut a guy off and kick the ball or punch it, whatever you have to do to get it in,” said Wallace, who added that he will be keeping an eye on Breaffy’s progress during the year as the club, whose only two county final appearances came in the last three years and both ended in defeat, bid to finally lift the Paddy Moclair Cup.