7 Most Influential Footballers of this Era

In an era where the team collective has begun to clamp down on so many individual talents, fewer players are making a massive individual impact on the game.

County and club managers want their men operating in specific roles, tracking runners, getting the ball to their kickers, and playing the percentages.

Yet there are the stellar few out there who take the game to new heights, men who have had such an influence on the game that they have redefined the importance of an individual in this era. Or, quite simply, have created a new role.

Find another player who has been so relevant for so long at the very top of his and his team’s game. The Moy man would consistently be considered among the top five players in the country since making his debut in 2002 and rose above any challengers due to his All-Ireland winning performances in 2008.

When people speak of Alex Ferguson’s amazing career, there’s often reference to how he built teams in different eras and still won. With Cavanagh, Mickey Harte constructed more than one team around the midfielder-cum-forward and as before, it’s borne fruit with an Ulster title as captain in 2016.

A huge player in 03, 05, 08, 10, and 16 — all years when silverware was collected and brought back to Tyrone. Cavanagh brought us ‘the shimmy’ which largely results in a score, has well over 200 competitive appearances for his county, sped up the ‘black card’ rule change with his rugby tackle against Monaghan in 2013, and is well on his way to a sixth All Star.

His influence in different positions through the changing of generations is unrivalled in the modern game. 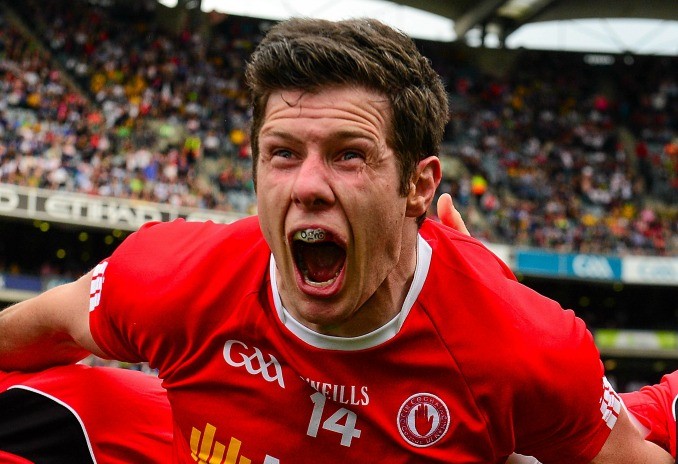 Clucko’s influence is characterised quite simply like this: he changed the way we think about goalkeeping in Gaelic football. He’s always protected the onion bag exceptionally well but he’s studied the game and peeled back some new layers with his revolutionary kick-out system.
Dublin would not be quite so devastating in turning defence into attack without the Parnells man, a man whose every accurate restart suggests he would be a crossbar challenge champion.

Given how dominant the Dubs are in many games, he also has to keep his concentration more than most; and given how rarely we can ever think of a Clutxon mistake, it suggests an amazing mental strength.

Clucko has played wing-back for his club side Parnells and one of the best in that position, James McCarthy, last year admitted his team-mate has the talent to do the same at inter-county level.

No goalkeeper has ever before scored the winner in an All-Ireland as Cluxton did in 2011, and no netminder has ever changed what it means to wear number one. Brilliant when the Dubs were average, and continues to be the best while they are. 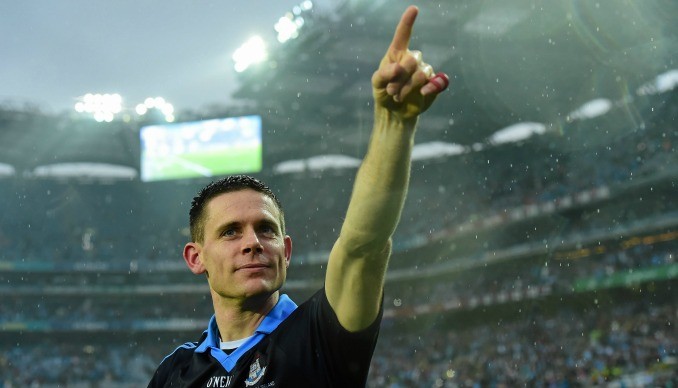 Consider what Donegal have won before and after the championship debut of Michael Murphy. Just five Ulster titles had gone to the Hills up until 1992 but from 2011 onwards Murphy has lifted the title as captain on three occasions — narrowly missing out in three more finals.

A player for big moments, consider the 2011 All-Ireland quarter-final against Kildare that went to extra time, when the Spartan full-forward’s illogically delicate foot control kept an errant ball alive and soon led to Kevin Cassidy’s winner.

Remember all the huge scores in big games, such as the 2012 Sam Maguire win over Mayo where the tone was set with an early three-pointer.

As he was then, he’s been man of match in so many huge games, and that translates to his club too where his 1-7 out of 1-8 sent Glenswilly to 2011 county title glory. As the final whistle went against St Michael’s, it was the barnstorming man of the match still fighting on his knees for the ball, before throwing his arms out in delight when the whistle went.

In the history of the GAA, few players have led their county out of the darkness into such a period of success. He’s the leader of the pack, the engine, the coat of polish, and the booming mufflers.

The main reason pundits still insist he should play closer to goal is because he continue to wear number 14, a subliminal reminder of his scoring prowess in every outing. But Donegal need him in more places than one, and rarely has one been so influential to so many.

A consummate firefighter like no other in the game right now. 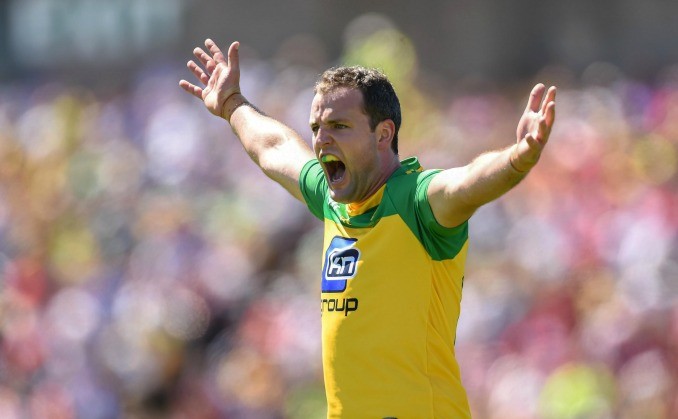 Think back over history: who has ever played football quite like the Gooch? When so many All-Irelands were won on the back of the chin-up bar, the chest press, lunges, and RDLs, Cooper stands above them all with natural talent.

The powers of the Dr Croke’s man may be waning since suffering a cruciate knee injury in 2014 and it’s quite possibly that 33-year-old Cooper hasn’t yet returned to full sharpness. Still, we suspect he’s the sort of man who can turn it on any day.

His performance in the 2013 All-Ireland semi-final was that of an NFL quarter-back, the way he dropped back before picking a lovely kick-pass in the lead-up to James O’Donoghue’s early goal hasn’t been seen before or since.

So the influence of Gooch is, for both club and county, that he has been the player above all who does things that everyone else wants to replicate.

Be it his scoring ability, his range of passing, patience, nose for when to be ruthless, quick-thinking during play or to sniff a goal chance with a quick free.

Gooch was a club mascot when they won the All-Ireland title in 1992 and scored 4-34 in the eight inter-county finals he’s contested as a player.
Paul Galvin tells a story of the Gooch being fast asleep two hours before the September decider in 2007 before scoring 1-5 against Cork.

When others are looking to measure influence on a GPS, this master is crafting with his hands, feet and brain.

What sums up the country’s estimation of the man is that when he got hurt playing for Dr Croke’s against Castlebar Mitchels in February 2014, people weren’t talking about his potential loss to Kerry — but to the game itself. A ubiquitous sentiment.

How many uncompromising, abrasive corner-backs have brought regular scoring into their games? McMahon has seen sweepers tear forward from corner-back and decided he can do likewise from the full-back line with huge success.
Where once he wasn’t good enough for the Dublin panel, he’s now an invaluable starter and was a key player as Ballymun Kickhams reached the All-Ireland final in 2013.

McMahon outscored his marker Aidan O’Shea 1-2 to 0-1 in last year’s semi-final before routing the Gooch when getting the only score of their duel against Kerry in the final.

The copycats will appear and that’s the power of McMahon’s influence.

McManus is ‘the’ one-man attack in a province where defences have largely been swamps in recent years. He’s shown that you can play against blanket defences with one man up front on his own, and somehow still be a live threat.

Few other players could put Donegal on the back foot in the same manner of Clontibret’s talisman.
The forward has the sort of frame you could imagine touring up Mont Ventoux in July and it’s allowed his to scythe through the narrow gaps offered by rival sides these days.

The reason he makes the mark as being so influential is that it’s hard to think of any other player who has been such a threat with little or no support against the odds.

There have always been targetmen of different varieties but none so isolated, and so classy. McManus wins possession, scrambles furiously with the ball as he shrugs off one and usually two markers, then either smashes the ball over or holds it up for his team-mates.

In the 2014 All-Ireland final, James O’Donoghue was used as a decoy as Kerry won the title, whereas Malachy O’Rourke had no option but to leave his sharp knife up front against a Donegal and enjoy the show.

The patience and scoring ability of Bernard Brogan, the toughness of a Michael Murphy, and the graceful kicking style of the Gooch. 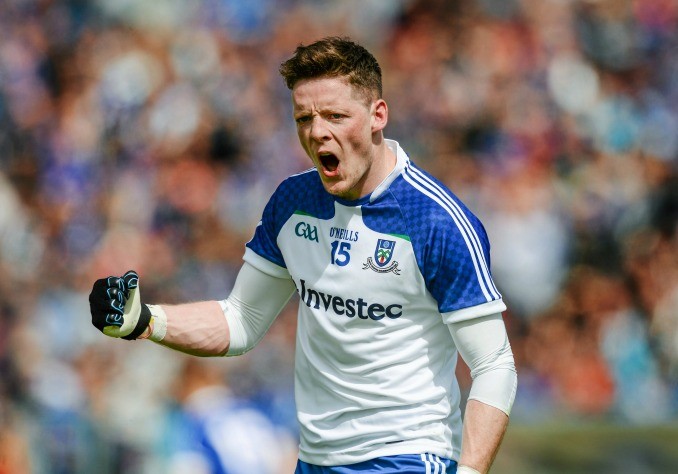 Roving wing-forwards are nothing new. Brian Dooher, Paul Galvin, and the many others who have been given the graveyard shift associated with the ten and 12 shirts.

McHugh went a step further when stationed as a sweeper for Donegal under Jim McGuinness, consistently burning his lungs launching attacks from inside his own ’21.

When Donegal took the GAA world by storm in 2012, the Kilcar star was given an All Star in the wing-forward position where he is nominally picked.

The Ulster side counter-attacked en masse that year and we’ve seen other teams follow their and his lead. Brian Fox of Tipperary was the latest to do so in the All-Ireland quarter-final win over Galway.

Imitation is the sincerest form of flattery, and that began after his 2012 exhibitions.