Becoming a parent changes everything. With a family of your own to look after, suddenly goals and priorities shift. And for Maria and Aidan, the impending arrival of their daughter Croíadh pushed their goal of owning a home to the top of their priorities. It took some sacrifice and a whole lot of belief, but they got there. Here's how.

The first family to feature, the couple discovered they were expecting their first child while living in their dream rented home in Dublin 8.

A hard-won place of their own after years of a long-distance relationship, they were faced with a dilemma. They could stay in their bespoke but small cottage and raise their daughter. Or they could give up their own space and move in with Aidan’s parents to save towards a house of their own.

Despite the challenges posed, they chose the latter.

Maria reveals: “We always knew at one point in our life we’d own a home, but it was far off in our minds. But as soon as we found out I was pregnant, we knew that goal had to be achievable sooner rather than later.”

“At the end of the day we wanted something to pass down to Croíadh, it wasn’t just us anymore. And the only way we could buy a house was to move back in with our in-laws to help us save more. It was difficult because we had a little cottage house and it was perfect when we found it. But we’re really lucky that they were willing to take us in because not all parents would.”

Together since a fateful encounter when Maria visited Ireland on a student visa from her native Canada, the couple have proven form when it comes to commitment.

And this resolve was called into action once more. Despite their efforts, the perfect house proved elusive.

Maria explains: “As we were looking at houses within our limited budget, we started to get really discouraged. It’s important to have that belief that you eventually will get there and have your own home. We did need to hold onto something. The way house hunting is, you can go and feel great about seeing a house but a lot of it is out of your control. There are other things at play and other people can come in and say, ‘Oh, I like it too,’ and their budget is way bigger than yours. That could really discourage you.”

“But at the end of the day, we always wanted a house. So it’s that belief. One day, no matter how long it’s going to take, we will have a house.”

When Persistence Pays Off

Happily, their persistence paid off, as they secured their family home earlier this year. Maria says: “When we got this house and signed the contracts, it was surreal. There was no bidding war as it was a new build. It was like we were there at the right place, at the right time.”

Now happily at home in their new neighbourhood, it’s clear they’ve realised their goal. And Maria says that taking cues from her own parents was key to keeping them focused.

“I always told Aidan, ‘We’re going to get there eventually. My parents did it and we’re in a way better position than they were. They had four kids and were trying to save all the time. We have one and we’re living at your parents’ house rent-free.’”

And while the house hunt took some time, the mortgage application process was streamlined. Maria says: “Our experience of getting the mortgage at AIB was smooth. I just felt that they told us, ‘You need this, this and this’. We had our papers ready to go. It was a smooth transition.” 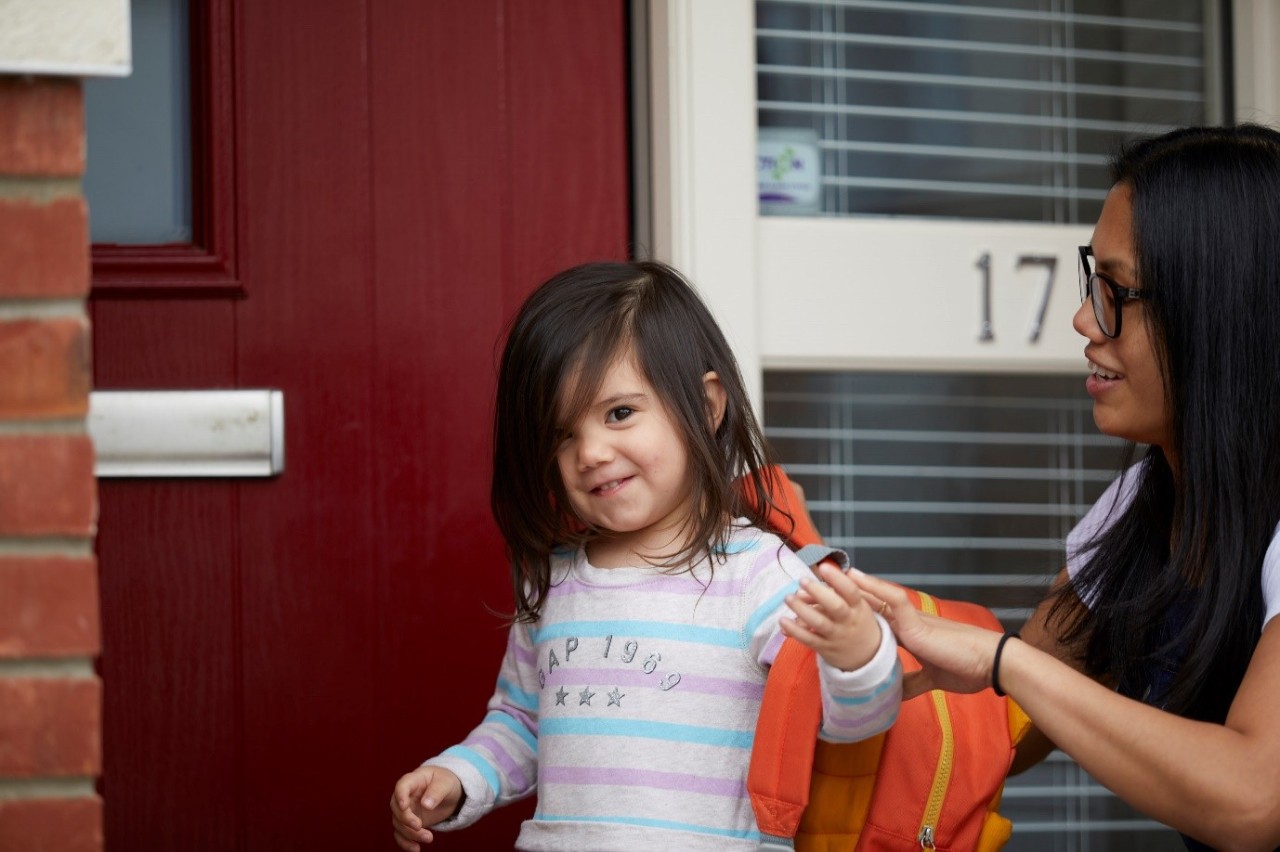 Nestled in the back of the house, the family’s kitchen is now at the heart of their daily life, where they share mealtimes across a rustic wooden table.

“We made the place feel like home by getting a really big table,” Maria explains. “I grew up with parents who worked a lot but we spent quality time together during dinner. That’s when we would all catch up with each other.”

“The first time we had Aidan’s parents over for dinner was so nice,” Maria recalls. “Being able to invite them as guests to relax in our home and put their feet up while we made dinner was a lovely feeling. “

“You could see it in their faces, that they were kind of relieved like: ‘Okay, I think we’ve done everything we can for our son.’ That was nice and a really good first memory.”

Over a decade after their first meeting, the couple have a host of unforgettable moments ahead of them in their new home. And while they faced challenges along the way, Maria says all their effort paid off.

“In the end, it was all worth it. Losing Harold’s Cross, the savings, the anticipation and all the let-downs throughout the process of finding a house - it was definitely worth it,” she says.

“I look at Croíadh and it’s great because she’s known her grandparents her whole life. For her, she had four parents when we lived there. We were very lucky in that sense so that was the big pro of moving in with Aidan’s parents and the saving, which got us here.”

If you’re on the hunt for the perfect family home, our team of AIB Mortgage Advisors can help you through every step of the journey. Book an appointment with your local Mortgage Advisor today.