"It ain't what you don't know that gets you into trouble. It's what you know for sure that just ain't so." Mark Twain

I love this quote from Mark Twain, as I have been involved in many debates and arguments with friends over the years when it comes to sport, but especially GAA. The wrongs and rights of what is happening to our games and how and who is doing these often dreadful things. And then when I read the paper, I often find out it's me that’s doing them.

When first asked to write a piece on the Dublin-Kerry game, my initial thought was to write about the All-Ireland champions’ defence and how it has been compromised by Rory O’Carroll going travelling, then Jack Caffrey following in his footsteps, and lastly the injury to James McCarthy. But when I looked more closely, as you will see in the stats below, I was somewhat off the mark… not for the first time, I might add. This happens quite often in sport when we can choose what we want to see, or what we think should be there, rather than what is there — because what is there isn’t what everybody else is telling me. So let's have a closer look, with thanks to Brian at BMac Performance Analysis who provided me with an interesting statistical insight.


In the last three years of championship football where the scoring average has been 16.3 points per game (ppg), Dublin are ranked the number-one attacking team with an impressive 25.1 ppg — 54% more than the rest; Kerry's attack is rated second at 21.7 ppg. At the other end, the average score conceded in that timeframe is 17.7 ppg, and in this table Dublin and Kerry are ranked third and fourth respectively behind Tyrone and Donegal. The Dubs' defence is coughing up 23% less than the average at13.7 ppg, while Kerry’s has offered up 13.9.


Notice that while there is little difference defensively over the last three years, but a marked contrast in attacking productivity during that time. For the record, Dublin played 15 games, winning 14 — with the drawn game against Mayo 2015 excluded; whereasKerry played 13 games, winning 12 — leaving out their drawn game versus Mayo 2014.The Dubs’ defence has gotten better over the three years, with a big improvement from 2014 and a marginal gain from 2015 to 2016. So what I thought about Dublin’s defence doesn’t stand up to scrutiny — or my brilliant analysis.


So what we can offer here from a mathematical point of view is that this looks like a very close semi-final but Dublin ‘should’ win by four or five points based on the evidence above. Even when you take into consideration that the Dubs beat the Kingdom in the league final by 2-18 to 0-13, you have to factor that 62 minutes in the scoreline stood at 15-13. A lot of their big games recently have followed this pattern — August 2013 semi and September 2015 final — but I suppose the most important statistic has been Dublin coming out on top. However, Kerry have always been close enough to win coming into the last ten minutes, so write them off at your peril. 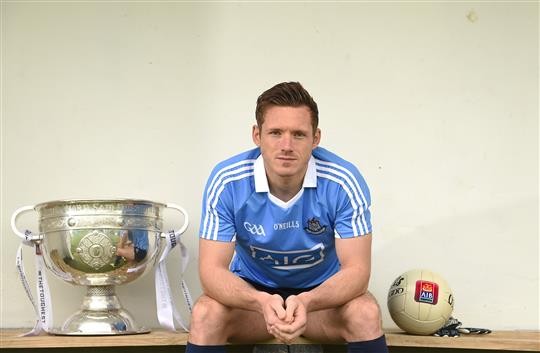 Thankfully not all games are won on paper or to quote our banking friends, past performances is not an indicator of future results, especially when these two are involved. They are by far the most successful counties in the history of football with 62 titles and 96 final appearances between them. So what is it that makes these two teams special and puts them way beyond others’ reach?


We can look into their history and perhaps see different things like how Kerry are in a hurling province, building a winning culture against the backdrop of local rivals putting more effort into the other code — we will soon see how they have honed that winning instinct and timed their peak for the August bank holiday weekend and staying there for six to seven weeks. We can see a county with little or no distractions in terms of other sports and where all their young men turn to Gaelic football as an outlet for their athletic abilities. A mostly rural county where tough players are needed and skill is highly lauded.


In Dublin we see the opposite, an urban county with various distractions and sometimes the statistic of huge numbers (and huge money) is undermined by the many sports and interests that large cities offer the young people in its catchment area. But with this comes a huge drive and effort to fight these distractions and with an influx of people from around the country, competition is always high and again winners here need to be tough and highly skilled to get noticed.


So how do these two different cultures produce these top teams? Having played a lot of my club football with Na Fianna in Dublin and having a wife and in-laws from the Kingdom, I have had a look at both worlds and remain envious of both. To show what I mean I go back to my first few years with the International Rules team, as I think you can really see the true player when he trains and plays with all the top men on a level playing field. I believe every county produces skilful players but not every county produces winners. And when we got together at those training sessions at the end of the year, the Kerry and Dublin lads would usually have at the very least a provincial medal in the back pocket.


So they would have that deep belief in themselves, not just a veneer of confidence that is easily shattered but a deep belief that comes not just from being good, but from winning.


However these boys would see some of this time as their downtime and might escape for a few beers the night before training (I can already here all the shouts out there saying: “there I told you so, a few beers makes you better”). But the next morning when the hard training started and the hard runs had to be done they were always there sweating it out and putting in the hard yards. Whereas some of the other players with the perfect physiques suddenly had some niggles etc, and could only play in the games. I had noticed this phenomenon playing in Dublin too and even with my own county. 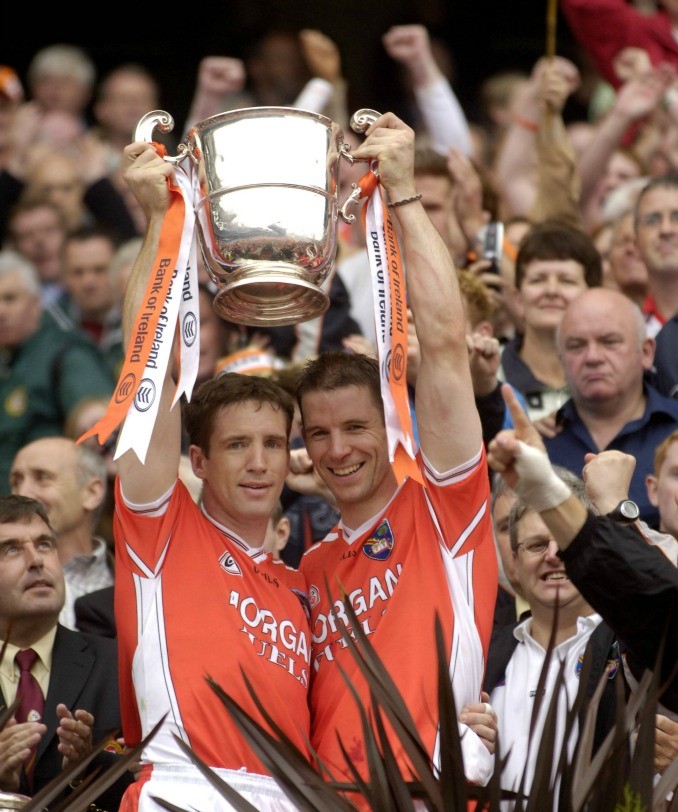 My point here is not that alcohol helps, and thankfully it does not happen that much anymore during the season, but that winners are never afraid of hard work. They’re not shy of putting in the hard yards or of pushing themselves harder than their competitors, because they know that they have been to that dark place and they don’t mind it there. They don’t fatigue as easily as their opponents, they have practiced and made good decisions at these times and can display their skills while their competitors get sloppy, make mistakes, give the ball away or give up when things get tough.

The reality of why they’re the best doesn’t sound as amazing as those writing the headlines would have you believe, that it was down to some piece of magic or natural talent. Then of course hearing about some magic makes the rest of us feel better about ourselves, because we know it’s beyond us and all that hard work and effort is just waste of our valuable time. But read any of these stars’ books or interviews and they all say that they worked harder than anybody else and that’s why they got to the top. But let’s not get bogged down in that one as it could take up a whole book.

Above is a favourite quote of Paul McGrane’s — a player I was proud to stand beside, a real warrior and a top-level player. He believes this quote to be true, especially in sport. Another man I know who thinks like that is Sean Boylan, who always seemed to find gems under many a hidden rock. He’s a great man-manager who looked to the character of the individual to see what hope he had of making him into the player he knew they could be. Not every All-Ireland winner is going to be a model citizen — in fact many traits that get you to the top can be seen as flaws in your character — but in general the top boys will have more good ones than bad. 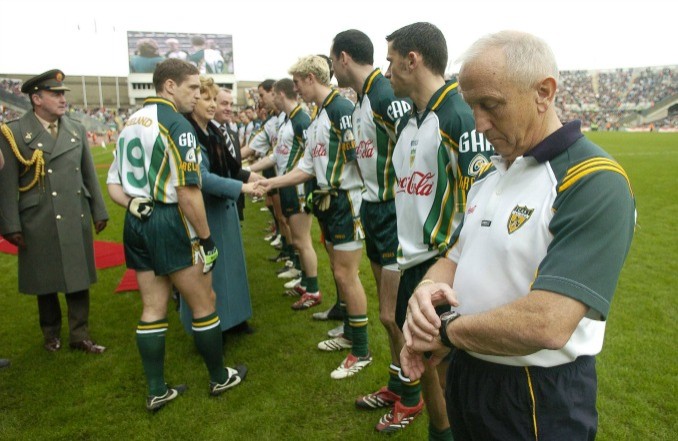 I know counties don’t produce these types of strong characters in every generation, but the bar is set by these types of men dotted throughout their history. They have added to their county jersey so much over the years, they love those colours and what they represent. They are proud of their history, the legacy that those before them left when they had the jersey on their back. It’s this that brings out the best in these counties — and you don’t hear them crying or moaning about the chore of representing their colours. They talk about the honour it was, they talk about how they wore it with pride and the memories it give them. And what they showed me in my time playing with them and against them was that the jersey came first, that none of them were bigger than that jersey or the legacy it represented, and that more than anything it gives them an edge over the rest of us. At their best their ego is buried and every man plays for those beside him, it’s there that their strength lies and it’s there that the rest of us should strive to recreate. We all have our own styles as teams and players and should be proud of our differences but as winners we could do worse than copy Kerry and Dublin in that area.

Lastly, let’s look forward to Sunday and hope they give us a classic. Even if they don’t let’s try and look at the many great aspects of our game that so many people choose to ignore. It’s there if we look and enjoy them instead of crying and moaning about what’s not there. I, for one, have enjoyed many of the games this year and they have kept me glued to the seat ’til the very last minute. Not all the games have been great but lots of them have. Football is a great game and it is getting better. Let’s hope they referee the football this week like they do the hurling, and that we take the chains of these two great giants so that they can do what they do best: get wired into each other!