You must bring something new to your game on All-Ireland final day as an individual and as a team. A different edge to your play and your performance. You have to bring a new skill set, something that the opposition and everyone in the country hasn’t already seen and studied on the television all year.

I remember back in 2001 when Galway came through the qualifiers after losing to Roscommon in the Connacht championship, and Meath were waiting for us in the final. The Royals were after trouncing Kerry in the semi-final and were red-hot favourites to lift Sam Maguire.

I was a left-footed player who could barely stand on my right leg, let alone kick a ball with it! I used to rarely kick with the right but when we qualified for the final, John O’Mahony pulled me aside after training the next night and decided that I needed to add another dimension to my game. Darren Fay was going to be marking me and John felt his task would be straightforward enough unless we could produce something different. Fay was going to be watching my left foot all day long.

So O’Mahony said to me, “right, you’ve three weeks now to get practicing with your right foot, you might only use it two or three times in the final but that could be enough to get us out of trouble once or twice which could ultimately help the team”. I said okay and walked away before he gave me anything else to improve on, as he may have had a lot more to say. He gave most lads something to improve on.

Between then and the final, I used to take a bag of balls from training and head down to the pitch in Killererin. I took my baby sister Cora down with me and get her to kick the ball to me. We spent a good few nights at it in between Galway training sessions.

I ended up kicking two points with my right foot in that final, which made all the effort worth it. The point is that these Dublin and Mayo players have to bring a different facet to their game on the third Sunday of this month because their performances so far will not be good enough.

In many ways, there are some similarities between Galway back then and with this Mayo team now. They also came up short back west but after going through the qualifiers without playing to their potential, their confidence has been building.

Mayo did enough to get past Fermanagh, Kildare and Westmeath but they’ve beaten some strong teams since then in Tyrone, which was a huge win, and then Tipperary in the semi-final. I think there is a big performance in this Mayo team. I know they caused controversy by postponing a round of clubs games lately but it shows they are giving their county team every chance to be fresh for the final. Even as I say that, I immediately consider all the threats that Dublin have.

Paul Flynn has been carrying an injury and is due a big game after a quiet semi-final but again the man to watch out for is Diarmuid Connolly. The expected match-ups of Philly McMahon v Aidan O’Shea and Jonny Cooper vs Cillian O’Connor make the mouth water but Connolly v Lee Keegan is still the headline act.

The referee has a big job to keep an eye on this battle after what happened last year and I’d imagine the Westport man will be happy enough if the ball never enters the equation so long as Connolly remains quiet enough for the 70 minutes.

Think of how well Keegan did against Sean Cavanagh in the quarter-final when he spent a lot of time in the unusual position of full-back but still managed to kick two superb scores — one off the left under the Hogan Stand and what turned out to be the match-winner off the right under the Cusack — despite man-marking Tyrone’s main threat. Would Lee have done much more than that if he was playing his normal game and driving forward from wing-back?

In some ways you’re robbing Peter to pay Paul putting him there but Stephen Rochford needed to address the county’s past failings in finals. Think of 2004, 2006, 2012 and 2013 when they could never quite find someone to hold the square and Kieran Donaghy, Michael Murphy and Bernard Brogan did serious damage to Mayo in those finals. 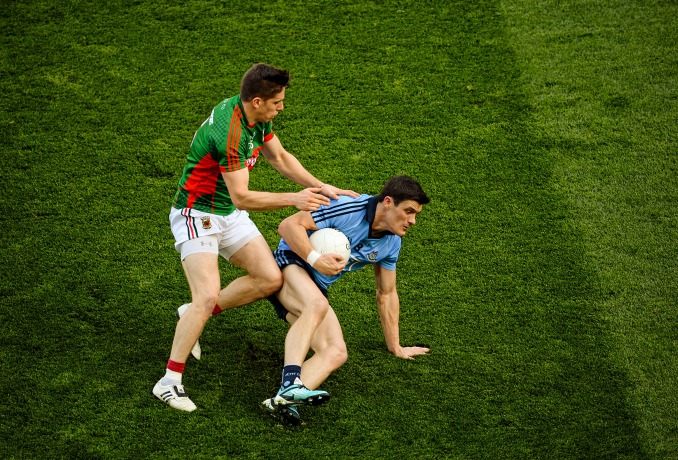 Different players have been tried at full-back this year and even Barry Moran was helping Keegan mind Michael Quinlivan in that area against Tipperary, so it’s a problem they’ve gone after and so far have sorted out. Kevin McLoughlin has also improved in his sweeper role as the year went on. Jim Gavin has had the same full-back issue since Rory O’Carroll opted out for the season. We’ll see on Sunday week if any square pegs slip out of round holes.

But it was pretty obvious to me watching Mayo this year that they have changed their ways. I studied the Tyrone game very closely and at numerous stages they could have broken out from defence at pace and counter-attacked in numbers. Instead of everyone pushing forward as they so often have in recent years, this 2016 team always seems to have four to five people inside their own ’45 to ensure that they don’t give up goal chances easily.

An All-Ireland itself is a huge occasion, and I always remember the couple of weeks beforehand, you could have a few thousand people at our training sessions in Tuam — quite a jump from the 10 or 12 old retired lads who’d habitually come in to watch us. There were also the press nights, discussions on tactics and in general it was far more open than it is today.

It’s a shame that everything is under lock and key now because watching the sessions used to keep the old lads going around the town, being able to tell their friends all week what they’d seen and witnessed at training and then adding a few yards to it in the local!

I remember one time when we were playing Mayo in a Connacht final and we were training in Pearse Stadium. Little did we know that a Mayo selector had a full view of our session out of an attic window in one of the houses adjacent to the pitch. One of their county-men living in Salthill had a place beside the grounds and they videod our session, so you can understand why things have changed now and why managers are so protective of their sessions.

I always got a serious buzz the week of an All-Ireland final. The only downside was that the week was so long — all you wanted to do was get to Croke Park and get the game on. To get into the sanctuary of the dressing-room and to know in your head that you are one person who can have an influence on the outcome — what you dreamt of as a child when you were kicking the ball against the gable end of the house. Not one person in the 82,300 crowd can have the influence you can have on the game. It is pressure but it’s a great position to be in and I think good players always thrive on that.

I’ll never forget going up to Dublin the night before the 1998 final against Kildare and staying in the Berkeley Court Hotel, which has now been demolished for a new commercial development.

I used to always room with Michael Donnellan back then and I remember we had a meeting at around 10pm to finalise tactics and arrangements for the following day. Of course ‘Match of the Day’ was on and the big thing was getting back to the room in time for the soccer. Michael and I were feeling peckish and we ended up ordering tea and sandwiches to the room at 11. The tea and sandwiches came up alright but only one cup and a pot of tea for two, so Michael used the old fashioned glass bottle as his cup for the tea. (To think that our star man was drinking tea from a bottle in a five-star hotel the night before the final was hilarious stuff.) I remember watching ‘Match of the Day’ and Newcastle United were playing against Nottingham Forest in the league.

Alan Shearer got put through on goal and was about to shoot but he feinted right and went left around the goalkeeper and tapped it to the net. Michael was sitting there with his glass bottle, took a swig of tea and said across to me: “that’s what you’ll do tomorrow when I give you the ball to put you through on goal.” So we had a big laugh about it.

As things transpired in that game in ’98, he did pass me the ball to me shortly after half-time. I was faced with Christy Byrne, one-on-one, and the first thing that popped into my head was Michael’s bottle of tea, Alan Shearer, and to go around the keeper. Amazing how the situation actually transpired. I was jogging back out to position after scoring the goal and Mikey was there roaring “ I told ya!” with a big smile on his face. https://youtu.be/nIV73ywp41o?t=3m

It’s an All-Ireland, and it’s all about getting your players to deliver on the big days, especially your forwards. Any champion team has two or three outstanding attackers, and we had the likes of Donnellan, Niall Finnegan and Ja Fallon. Tyrone’s great side had Peter Canavan, Owen Mulligan and Stephen O’Neill, Donegal had Michael Murphy and Colm McFadden, and you can see that Dublin have Bernard Brogan, Connolly, Dean Rock, Kevin McManamon and plenty more who have already delivered when it’s mattered most.

As poor as Kerry were for large parts of the semi-final, a Kingdom side in the past would not have let a five-point lead slip. These Dubs are raging-hot favourites, they have the better forwards on paper and will be extremely hard to beat. Jim Gavin deserves huge credit for keeping his players hungry and competing at the top level for so long and a fourth Sam Maguire in six years for this team would speak volumes and cement their place as the greatest Dublin team of all time.

If Mayo are to win this final, they will need huge games from the two O’Connors, from a rejuvenated Andy Moran, and for Aidan O’Shea to come up big too. They’ve enough in those four players up front, and between them they need to chip in with around 1-12 — and for a few others to make the scoreboard too — to outscore Dublin’s potent attack.

They simply cannot give Rock eight easy frees like Kerry did in the semi-final, but to me Mayo have the best tacklers in the game. They will also need three or four different plans for Dublin’s kickouts.

Ultimately, it will take a hugely concentrated performance from the 20 Mayo players that take to the field during the 73/74 mins and a hugely tactical set up from Rochford and his management team. Mayo are capable of all aspects but anything less I feel will hand the advantage to Dublin.

Mayo have been doing just enough in games all year and maybe this is their year! If Mayo can bridge the gap back to 1951, there would be one hell of a party for the loyal green and red army.