Sean Quigley: Being an inter-county player is a 365 days-a-year existence

I’m away for surgery in Dublin today and, to be honest, I’m a bit relieved.

It means that I don’t need to feed any bull to a manager about why I can’t show up for a training session or a match. The knife gives me a long auld doctor’s cert.


With the gilmore’s groin, I’ll be laid up and it’s gives me some time to chill out, to unwind after a very long season.

Roslea would normally be the benchmark in Fermanagh but we got knocked out at the semi-final stage of both the championship and league this year so we’re done. Don’t get me wrong, I love winning with my club but the body was crying out for a rest.

There’s this idea that players tend to go on mad drinking binges at this time of year but I don’t think you can afford to anymore. Being an inter-county player is now a 24/7, 365 days-a-year existence, the wheels keep on turning even if most laid folk don’t see it happening.

Plenty of teams are probably already setting out their gym plans and looking towards next year. October, November and December is a time when you should be able to relax but you need to keep yourself in shape now.

And it’s so hard to motivate yourself this time of year. You can imagine then when it finally comes to the summer and lads have been busting their balls for months on end after barely seeing a football — it can be hard to keep the spirits up.

For those who are still involved with the club, you are expected to come back from inter-county and immediately set the benchmark for everyone else. The perception might be that you can relax into this smaller environment after the wider focus with Fermanagh, but there’s no such thing. You have to lead.


So for those who wouldn’t be close to players, they might not understand the reality. You train through winter and then play county up until June or July, then you’re back with the club, you get a small break, and then the cycle starts again.


I’ve needed to get this operation done for about six months now, since before we were knockedout of the championship by Mayo. 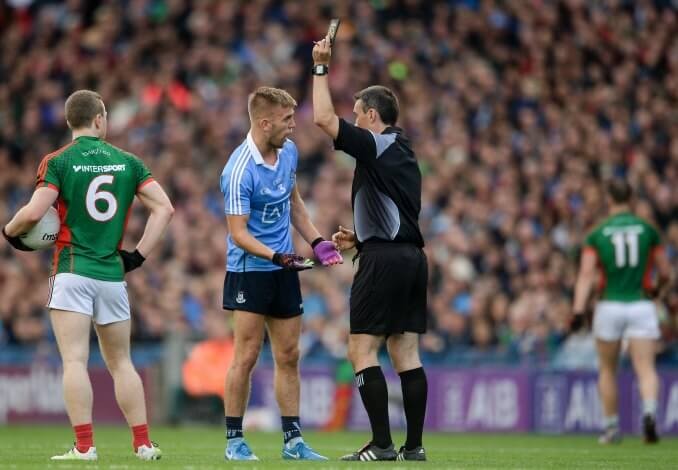 The black card is one thing our game would be better off without. I mentioned we lost a league semi-final with Roslea a couple of weeks ago and I was shown a black card for the sort of tackle that the rule was brought in for. It was a 100% nail-on-the-head job, so I’ve no complaints with that one.

But look here, the issue is that every time there is a foul now — both at county and club level — everyone in the crowd reacts by roaring “that’s an effin’ black card ref, he has to go”. That’s not what we want and it doesn’t help either how inconsistently it’s applied. With some officials, there would’ve been ten black cards in our game, so it’s gotten out of hand.

Think of James McCarthy seeing black in the drawn All-Ireland. This man is after working so hard to get back from injury and then he’s shown the line for almost nothing — it’s uncalled for. Lee Keegan and Jonny Cooper suffered similar fates. What did any of this add to the game? We’d be better off without.


Brian Fenton was my player of the season, he was Dublin’s go-to guy this year and was outstanding in both finals. For a man who was an unknown just over a year ago, he’s taken it to some level.


I’ve named my team of the year below and it’s only now when I look at it in full that I realise there’s no Mayo forward in there. That tells you the story really because at times they were toothless up front. 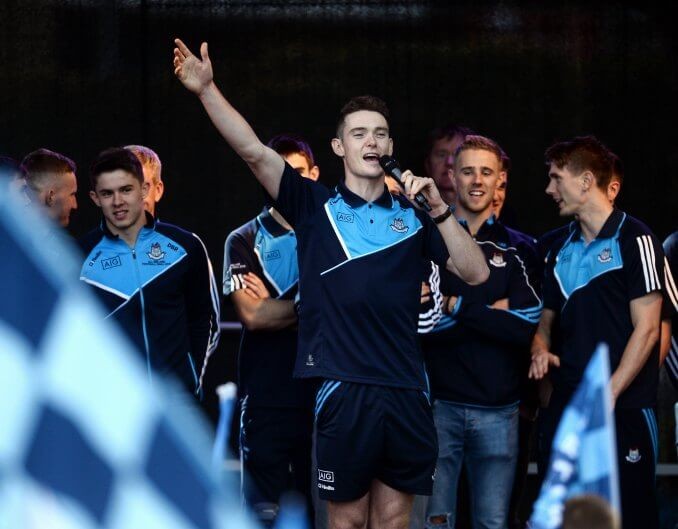 Aidan O’Shea needed a big game and it didn’t come, Diarmuid O’Connor never reached his top level, and Cillian O’Connor was quiet at times too. Diarmaid Connolly produced some amazing scores but Cillian’s to draw the first final was amazing. He hadn’t been having a great game but what a pair of O’Neills he showed to smash over that leveller. It was a pity for him to miss that free in the second game.

With Fermanagh, I haven’t thought about the new season yet or drawing Monaghan in Ulster because you’re just enjoying the downtime while you can get it. I’ve a good excuse now to put the feet up even though I didn’t go looking for it. I’ve spoken to other players and sometimes an injury gives you a relief from the constant requirement of being an training-training-training.

But the upside is that you build up an appetite while you’re away. I’ve no doubt that after the six weeks it will take to recover from the groin, I’ll be mad to get back.