What clubs have provided the most All-Ireland winning Football captains?

The irony: to see Kerry men helping a Dublin side top this list.

Both counties have a long tradition of winning but you wouldn’t expect to see one hand wash the other. Through mutual benefit, that’s what happened.

Paddy Kennedy had won a county title with his native club Kerins O’Rahilly’s in 1939 and collected five senior All-Irelands with the Kingdom. In between, he moved to the Geraldine Moran’s club in the capital where he won three Dublin medals, before adding a fourth when lining out for the Garda club.

Perhaps his finest hour with Kerry came when still playing for Geraldine’s — who top our list — in 1946. Like Tom Crean who also hailed form the Annascaul area, he excelled away from home.

It’s one of those stories that ties in with the history of the GAA where romantic sporting storylines, cruel heartaches, objections over injustices on or off the field, and just about everything in between is the norm. Kennedy’s is another tale that, through the prism of modern thinking, is certainly a world apart.

It started with a drawn final, as we had in 2016, when Kerry should have lost out on the All-Ireland of 1946; they were six points down on Roscommon with eight minutes to go but scored two late goals to send it to a replay.

Johnny Walsh had trained the team for that game but Dr Eamonn O’Sullivan took over those duties for the second clash. He dropped captain Gus Cremin, allowing Geraldine’s man Kennedy to assume that role for the replay which they won. Back then, the leader on the day took the honour of lifting the cup, unlike say Lester Ryan in 2014 or Michael Fennelly in 2009 for Kilkenny.

Cremin, who came on to score a vital long-range point, was chaired around Croke Park by supporters who felt he had been wronged, though he declined an offer from the county board to bring the Sam Maguire out to his home. 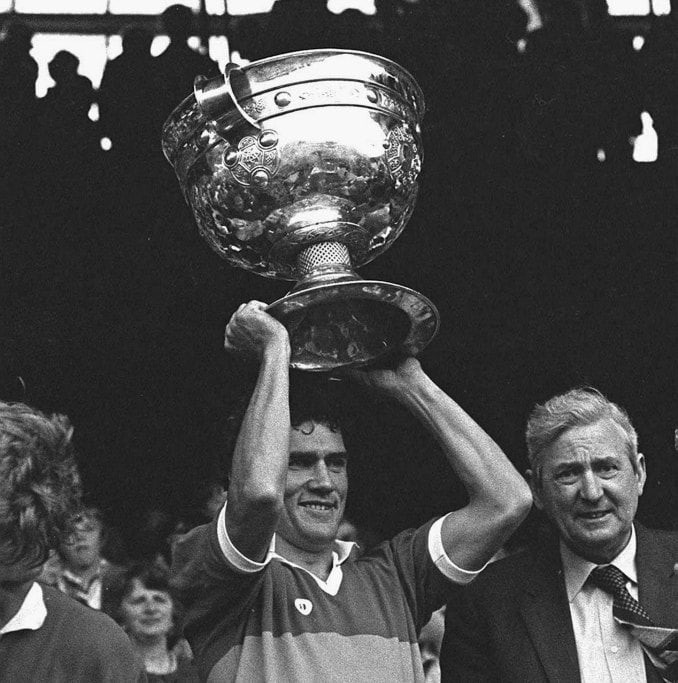 Though Kennedy in ’46 might be the most recent Geraldine’s man to lift Sam Maguire for Kerry, he wasn’t the only one. Four years earlier, in 1942, Joe Fitzgerald had also been playing for the same southside capital club when he led the Kingdom to glory.

Tralee Mitchel’s are next on our list, among a quartet who can boast three All-Ireland winning captains. They became so dominant locally that they were split up into three teams — Austin Stacks, Kerins O’ Rahilly’s and John Mitchel’s — who subsequently produced their own stars for this list.

All of which means that this original catchment area in this town produced an incredible line of successful footballers, which of course is not really fresh news. The history of Gaelic football is synonymous with green and gold ribbons, after all.

The first man to lift Sam for Tralee Mitchel’s perhaps provided the inspiration for a famous fictional character created by John B Keane. The famous quote from Bull McCabe in ‘The Field’ declared “it’s my field” — and no doubt a man who shared his christian name, Thady O’Gorman, guarded his own patch too when leading Kerry in 1903.

A year later, Irish revolutionary Austin Stack was representing Tralee Mitchel’s and held the All-Ireland aloft, coming 25 years before a club that would bear his very name watched Joe Barrett do the same for Kerry.

Barrett repeated the feat in 1932, and was followed up five years later by Miko Doyle. The latter — who played his first season when Barrett was captain in ’29 — set an incredible record that is unlikely ever to be match by winning four All Ireland senior medals before the age of 21.

John Mitchel’s don’t quite make the list but they warrant mention, what with them being another spawn of the Tralee Mitchel’s club. They produced two winning captains: John Joe Sheehy in 1926 and 1930, with his son Sean Og emulating his father in 1962. Two years before John Joe first lifted Sam, he was involved in an extraordinary scenario for the Munster final in Limerick. The Mitchel’s man was an anti-Treaty militant and was on the run, with a further complication being that his team-mate and captain Con Brosnan was on the other side as a Free State Army officer.

Brosnan arranged safe passage for Sheehy to play the game and, after originally entering with the crowd, he came out onto the field togged for action. Almost needless to say, Kerry beat rivals Clare and the forward slipped away to resume his fugitive status.

The man named at the top of the article, Paddy Kennedy, didn’t lift the Sam Maguire when playing for Kerins O’Rahilly’s but no doubt his native club had a central influence on his development. The final sprig to grow out from Tralee Mitchel’s, O’Rahilly’s also contribute to this list with another three victorious Kerry leaders: Dan Spring in 1940 (a Labour TD for Kerry himself and father of former Tánaiste Dick Spring), James Murphy in 1953, and John Dowling in 1955.

St Vincent’s would likely have more players on this list if the honouring of selecting Dublin captain was bestowed on the county champions in 2014. The Marino club won their 27th crown that season and that would have given them the opportunity to nominate Diarmuid Connolly as captain for 2015 when the Dubs won the September decider. 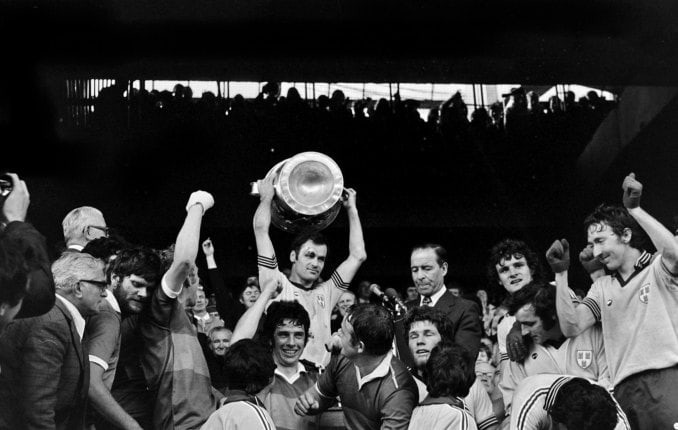 As it happens, they also have to settle for three captains — two of whom also managed the county to glory. Kevin Heffernan blazed the trail in 1958, was matched by Des Foley in 1963, before Tony Hanahoe did it back-to-back in 1976 and ’77 (when he was player-manager).