A host of All-Ireland winners take to the fields this weekend at all levels.

Kilkenny are known for taking home the silverware at the highest grade, but now the plucky underdog counties are looking to take them down.

There’s a family affair in Portlaoise too, where cousins will collide for a huge prize.

You might not know the same but, if he were in a more high-profile county such as Kilkenny, you certainly would. Gerry Keegan is 21 years of age but has now won four Christy Ring All Stars playing for Kildare. The crafty forward scored 1-4 to help the Lilywhites to Ring Cup glory in 2014 and he will be the main focus of the Carrickshock defence. Fergal Conway, who has just been named Kildare footballer of the year, has been crucial at midfield while on the inside forward line is Mark Moloney, who won a Harty Cup medal with St Flannan’s. They are one of many clubs hit by immigration, apparently losing almost a third of their team in recent times, while Conor and Niall Kenny have transferred to Borris-Ileigh where they have family roots. The former spent time with the Tipperary senior hurlers and for the 2017 season joins up with Liam Kearns’ footballers. Celbridge are coming up against a Kilkenny club that has three senior All-Ireland winners in their ranks. Michael Rice has twice lifted Liam MacCarthy, as has 2014 replay goalscorer John Power, while his brother Richie exited the inter-county game after eight glorious Septembers. The lattermost confirmed his retirement from the Cats’ panel aged just 30 due to persistent knee trouble, but arguably the game’s most naturally gifted hurler still plays through the pain as an impact sub. With former Offaly stalwart David Franks also in the Carrickshock camp, they’ll fancy nullifying the exciting talents of Celbridge.

Few teams can boast an All-Ireland SFC winning captain, especially at junior level, but Glenbeigh-Glencar are an exception. Darran O’Sullivan lifted Sam Maguire in 2009 while fellow clubman Pa Kilkenny was part of the 2014 panel that again achieved success on the biggest day of all against Donegal. The Kerry side will have to watch out for Gabriel Rangers hotshot Eddie Goggins, who has found the net ten times in his last ten championship games. 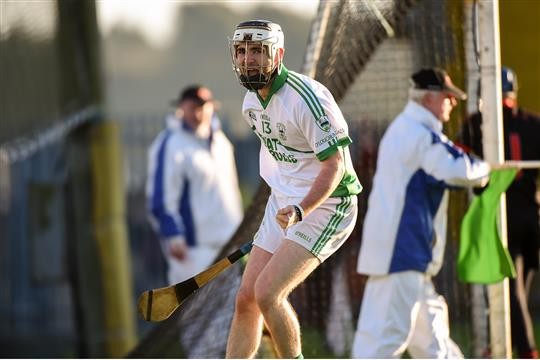 Six-foot something, powerful in the air, left-handed, inter-county class — it could be Brian Hogan, then again the description fits Mark Schutte. As it happens, the O’Loughlin Gaels defender and the Cuala attacker are related — second or third cousins the Dublin ace reckons. Of course, that brings the other Schutte, Paul, into the family affair at Portlaoise this weekend too. Cuala have three sets of brothers in the team with the O’Callaghans (Con and Cian) aided by the Treacys (David and Sean). The likes of Hogan, Martin Comerford and Alan Geoghegan all played for O’Loughlins in the 2003 Leinster final win over Birr while Mark Bergin was among those to also feature in the early 2011 provincial glory over Oulart-The Ballagh. Geoghegan’s return to prominence in 2016 has been remarkable as the 38-year-old had spent almost three years in retirement before returning with the panel in 2016. Cuala may have the young guns but with Hogan and Comerford, not to mention Mark Kelly and Bergin who have recently played in All-Ireland semi-finals for Kilkenny, O’Loughlins have enduring quality. Hogan, who succeeded his brother Keith of Clara as county-title winning captain this year, will fancy another climb up the steps at the expense of his relations.

You’re unlikely to come across rarer surnames this week than in the Munster junior hurling club final. Kevin Punch scored 0-3 in the semi-final win over Bodyke of Clare while Ballyduff Lower’s Marcus Millea will be looking to hold him out. Former Deise star Jack Kennedy is the star man of the Ballyduff side, but they’ll need to be on form to stop a Cork side that has totalled 5-61 from two Munster outings.

Gavin McGowan is the captain of Ratoath and won the U21B championship Player of the Year for 2016 after a man-of-the-match display for Meath in the final win over Kerry. Not only that, but he also scored a key goal against Antrim in the Christy Ring Cup final replay triumph. Ratoath last year won intermediate county and Leinster football titles for the first time and McGowan is one of a number of dual players. Bryan McMahon, who is the Meath senior football forward, is another along with Bobby O’Brien was who also on Royals senior panel. Against Mooncoin, they will have some Kilkenny connections in the form of the O’Hanrahan brothers – Padraig (Podge), Ciaran and Sean – whose mother hails from there. Darragh Kelly, the centre-back, played minor hurling for Dublin but has just declared for Meath.