In November 2010, my mates had a month’s mind for me. It was their way of helping me get over a traumatic event that I was lucky to recover from.

Rewind to October 10: the day I had an incident of Sudden Adult Death Syndrome (SADS) during a game of five-a-side at the hall in my local club, St Oliver Plunkett's Eoghan Ruadh. After a massive cardiac arrest, I dropped dead on the floor. A defibrillator, some quick thinking, and the chance presence of a fireman, Terry O'Brien, all helped to save my life.

I actually don't remember anything from that day or the previous one, only a visit to Lough Rynn as a prospective wedding venue. Because my heart stopped for four minutes or so, the blood supply to my brain was cut off which wiped my short term memory. When I woke up the following morning, it was if I had dementia, constantly repeating myself. I kept going over and over the point that I couldn't believe Ireland had only drawn with Slovakia in a soccer international, and I was constantly accusing one of the lads of ploughing me into the wall — hence the reason why I thought I was in hospital!

To occupy myself initially, I undertook an awareness campaign with theMater Foundation and The Cormac Trust. Still, that wasn't going to last forever and I really missed my involvement with football and hurling teams.

Around the same time, the introduction of stats to team sports was becoming mainstream. Mick Galvin, who was managing Plunketts’ senior football team, decided he needed someone to do it — hoping it would give an edge in the pursuit of a county title. Alan Brogan and Gareth ‘Nesty’ Smith knew my predicament and, knowing my background as a maths teacher, thought I'd be a good fit. All of a sudden I was back in the dressing-room, albeit in a completely different capacity. It was whole new lease of life for me: ‘when one door shuts, another one opens.’

It was to be the start of a brilliant journey which has led to my involvement with many successful teams from my own club to Dublin Under-21 football teams, county minor teams, the Dublin senior footballers and the Cuala senior hurlers. I’ve met some great people along the way and worked with top managers such as Galvin, Jim Gavin, Dessie Farrell, Paddy Christie, Ciaran Whelan and Mattie Kenny.

The system of analysis I developed with my brother Paraic, while not the sole reason, has been an important cog in the wheel in helping those teams pick up no fewer than 13 trophies and titles: four Leinster and two Under-21 All-Ireland titles, a Leinster Minor League, two National Leagues, two Leinster SFC crowns, an All-Ireland SFC, and a Dublin SHC title.

Since the early days with Plunkett's, it has been a steep learning curve. The initial phase of the game-related stats I was producing were probably the same as everyone else: headline stats; kickouts won or lost, shots taken and scored, how many times have we given the ball away or won it back, tackles made, and how many times we turned the ball over. 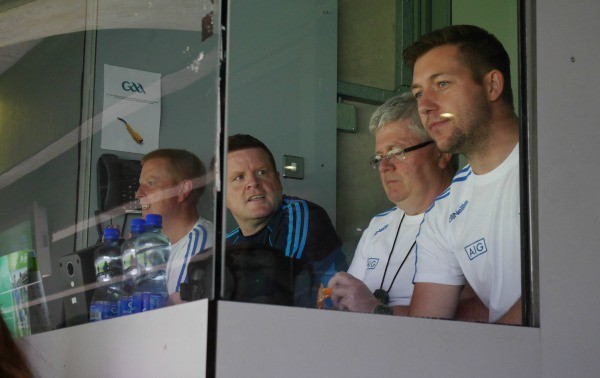 I had sheets and sheets with more boxes than you could count on them, and I was finding it difficult to keep up. I had to bring my brother Paraic in to help but we soon realised there had to be an easier method than "ticking the box".

We began to experiment with pitch maps. It became apparent very quickly that we could gather a far larger volume of information in a much easier fashion. It was also giving us all the layers required; the headline stats of where it was happening, how, and by who.

We could see which players were performing strongly or weakly for us. Just as importantly we could see who was hurting us or if there was a particular weakness we could expose. We also noticed something really significant: patterns were developing within games on kick outs, attacks, shooting, tackling and turnovers.

Initially, the information was only used post-match to inform players of their performance; where they had done well and where they could improve. As we all know, teaching and learning is far more effective in a visual environment. It stood to reason then that the patterns on the pitch maps would have a much greater impact in terms of educating the players than simply throwing a load of numbers up on a screen.

Coupled with video analysis from the game it allowed management teams to really emphasise particular points they wanted to make, and therefore players understood it better.

The different managers seen the benefit in gathering this information and we moved quickly to a situation where we gave the management teams a 90-second debrief at half-time, projecting the visual patterns we had gathered onto the dressing-room wall. The management teams could then pick out the relevant information and this was used to back up their half-time message to the players.

Invariably, this was effective in helping to improve second-half performances and the results were almost always positive ones. So it was then decided to establish constant communication with the side-line through radio contact, while sending images of the patterns down to an iPad. Armed with their own intuitions, and backed up by the patterns, the management could then make switches or changes with confidence.

On other occasions, something subtle may have turned up in the patterns which might have gone unnoticed on the side-line during the helter-skelter environment of a game. Crucially, because all this information was available to management teams ‘live’, the patterns we were gathering could help effect real change within the game. 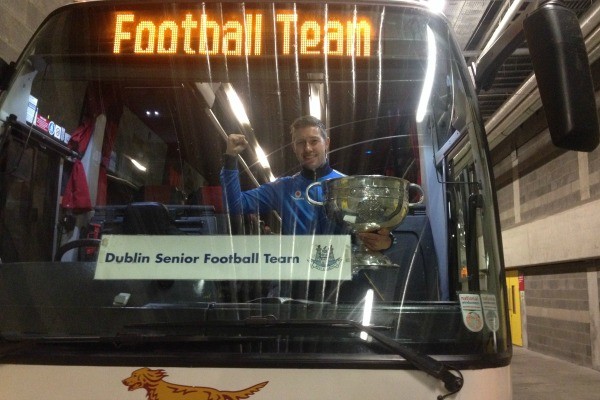 Every game tells a different story. Some days your shots-to-score ratio might be the issue because you’re taking too many shots outside the scoring zone. Other days your tackle intensity in particular parts of the pitch might be a problem because certain players aren't working hard enough. Then there are days when kick outs are hurting you or you might be giving the ball away too often in certain parts of the pitch.

It isn't just negative things that are highlighted by the patterns, the positive elements of your play are there to see as well. If a particular facet of your play is going well, then it is important to continue doing it — or if there is a weakness in the opposition, then the message is passed down to continue to exploit it.

There’s a certain dressing-room code you need to observe if you’re part of a GAA set-up so, while I’d love to name the games and circumstances, out of respect to those people I have to remain vague. You need trust in this game if you want to build relationships.

So an example I’ll give is of a high-profile game where we were being beaten at half-time and not playing well. One of the few positives that was showing up in our patterns was that we were winning almost all of our kick outs to the goalkeeper’s left. We relayed this information to the management team at half-time and the effects were undeniable.

During the second half, the goalkeeper took nine kick outs: eight to his left and one to his right. Of the eight that went left, we won seven and scored 1-4 from the resultant plays. We ended up winning that game by a point. Stats didn’t win the game, the players did, but one hand can wash the other. 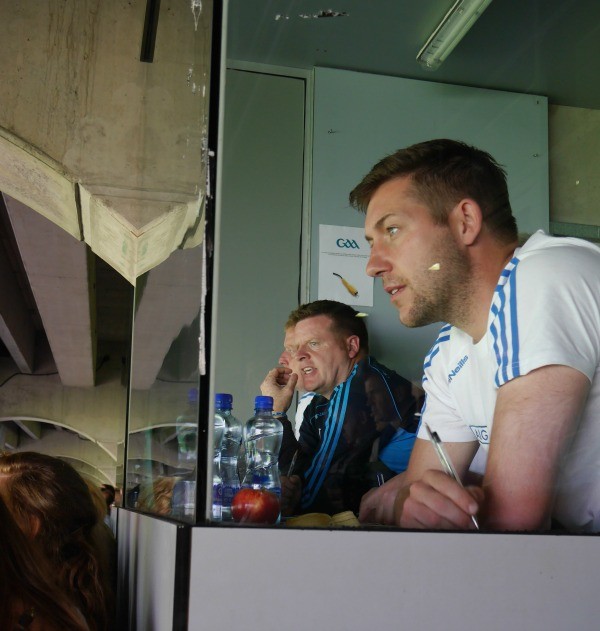 The fact that our information is objective and not based on opinion gives management teams a different angle. It gives them a new tool to re-emphasise particular facets of the game and force players to work harder on different aspect of theirs.

Players receive reports after games where all the individual and group stats are made available for everyone to see in an open and transparent manner. Targets are set on particular KPIs (Key Performance Indicators) for both the individual and the collective, and that has become one of the new barometers by which we measure how good or poor a performance is.

Players know they are being watched more closely and all the events around the ball are being recorded, so they know there is no place to hide – it helps bring out the best in them.

The patterns are also very useful in a pre-match context because we can analyse the opposition to see patterns in their play. What do they do on kick outs? How do they attack? Where do they concentrate their tackling and try to turn the ball over? Key men? Weaknesses? This helps management teams devise an effective plan and get their match-ups right.

One thing stats should not do is impede performance and there have been situations in the past where players have changed their game because they were worried about numbers on the wall. We dealt with one guy who had stopped kicking the ball for fear of losing possession and therefore being dropped. Once we noticed the change in his play, we spoke to him about his concerns and management put him at ease, telling him to continue with his natural game. After all, you want players to continue doing things that got them to this level in the first place, so it's important to use stats in the right way. 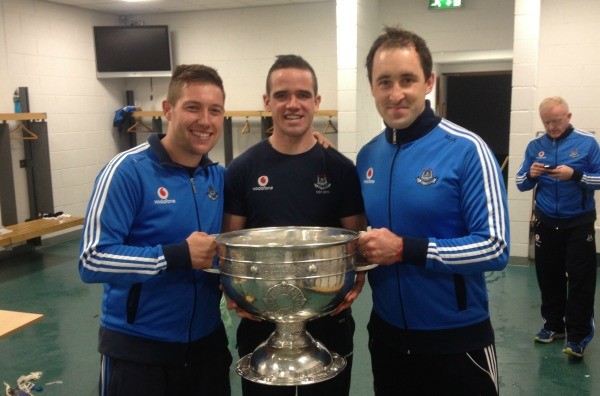 Because of that, we began to record and publish ‘positive kick passes’. Rather than stats acting as an inhibitor, this development ultimately encouraged players to work on their kick-passing so that they kicked it more often, but just did it better.

Looking back now on what happened to me in 2010, I feel I was lucky in more ways than one. To survive, as few people do, a lot of the things had to fall into place: the lads’ quick thinking, the defibrillator being present, and of course fireman Terry O'Brien being there. But outside that, it led me on a path which I probably never would have went on.

I always dreamed of being part of a Dublin team that would win the Sam Maguire when I was a young fella and I realised that dream under Jim Gavin.

But as my club mate Bernard Brogan said to me on my first day with the team over in St Clare's: "It's just as well you came through that door with a clipboard.”

Seaghan Kearney is currently developing a computer programme to record live statistical data. He has teamed up with Paraic O’Toole of Automsoft to launch ‘InGameInSight’. Their programme is currently being developed for Gaelic football and hurling and they hope to move it to the testing phase in early 2017. Their hope is to also develop applications in other sports such as rugby, soccer, American football etc.