No doubt part of the reason that Glenbeigh-Glencar are so heavily fancied to win this clash at Cusack Park in Ennis comes down to Darran O’Sullivan. At junior club level, very few teams have the sort of pace and quality that the 2009 All-Ireland winning captain brings to the fray. Then again, Louisburgh — which sits just beneath Croagh Patrick — have a former Mayo and Wicklow star among their ranks. Austin O’Malley is one of three survivors from the 2003 intermediate county title winning side — alongside full-back Marcus O'Malley and wing-back Alan Moran — who is still among the starting 15. O'Malley has done the rounds during his career having also picked up a Dublin senior championship with St Vincent's in 2006 and a Wicklow senior championship with St Patrick's in 2012. Glenbeigh-Glencar are managed by 31-year-old Aidan O’Shea, son of Kerry legend Jack, whose own football career was ruined by injury. Caolan Teahan was with the Kerry minors last year while Pa Kilkenny featured in the 2014 Munster semi-final and All-Ireland semi-final replay — meaning they have the talent to come through here.

Dunedin made a breakthrough in 2009 when they won their first British Championship and added a second this term before beating Rosenallis of Laois in the All-Ireland quarter-final. They come from aScottish Championship that has only four teams, where they play in a round-robin system, and the top two end up in the final. As for county experience,wing-back Conor Horan played minor for Mayo, while Frank Molloy and Sean Malee obviously were involved in their senior panels. Chairman Ronan McGurk was also in a Tyrone minor squad about 12 years ago. The Edinburgh side will be outsiders against Tyrone's The Rock, who beat Blackhill of Monaghan in the Ulster final.

St Colmcilles come into this huge game with some heavy weapons in their armory. Not alone do they have ex-Munster star Niall Ronan roaming from the full-forward line, but they have in their ranks new Meath captain Graham Reilly. The latter lined out for the Royals in the O'Byrne against Louth last Sunday and was on the wrong end of a high tackle that resulted in a red card for the Wee County. Interestingly,Colmcille's have appointed Des Lane to the managerial hot seat in place of Colm Nally who has taken up a role with the Louth senior footballers for 2017. The new boss will be on board against Pomeroy but will be working in conjunction with Colm Nally who remains until the All-Ireland campaign concludes. Of course, as often happens in the GAA, the story doesn't end there because Pomeroy have their own managerial situation to sort out.Mark Harte and Adrian O’Donnell will part ways with the Tyrone club after their Paddy's Day tilt ends as they will take over Ballinderry Shamrocks of Derry. Where else would you get it? 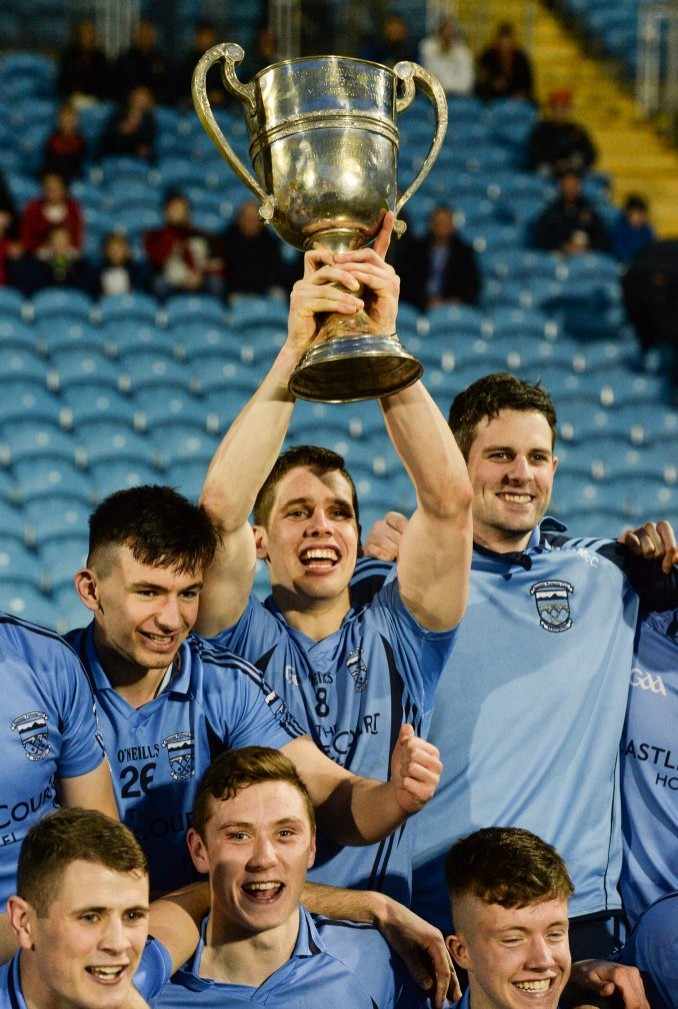 It’s amazing that both Westport and Louisburgh — situated close to each other in west Mayo — are both in All-Ireland semi-finals this weekend. Thankfully common sense has won the day and both games will be staged in Ennis on Sunday. Lewis Cawley was top-scorer in the Mayo championship but, in the main, they will be leaning on Footballer of the Year Lee Keegan and fellow county star Kevin Keane. Kenmare are heavily tipped to win the game and why wouldn’t they be? A full-forward line of Sean O’Shea, Paul O’Connor, and Stephen O’Brien would cause headaches for any senior team, let alone at intermediate level.

Mooncoin last won the junior championship in Kilkenny back in 1961 but a convincing win over John Locke’s sets them up nicely for a good run in the All-Ireland championship this year, with Antrim’s Lamh Dhearg in their way.

Kilkenny and Cork have never been the best of friends during this century so there could be some tasty action in Portlaoise. The Powers, John Tennyson, John Dalton and Michael Rice provide a wealth of experience for Carrickshock while on the opposite side, former Rebels intermediate player Tadhg Healy captains back-to-back London champions Robert Emmetts. The Cork man won a Munster intermediate crown with his county in 2010, beating Tipperary. Emmetts were All-Ireland intermediate champions in 2007 and just edged out St Brigid’s Cloughmills of Antrim in the quarter-final this season, and they’ll take encouragement from how Celbridge pushed Carrickshock. Certainly the Cats are taking no chances after sending their management team — boss Tommy Shefflin and selectors Larry O’Shea and Pat Fennelly — to Greenford to see the opposition and Robert Murphy (who scored 0-12) win after extra-time.

When Sean Moncrieff used to host ‘Don’t Feed The Gondolas’ on TV, a running joke at the end of the show was the prank calls he used to make under the alias of 'Monica Looley from Ahascragh'. That put the town on the map to the wider public but it’s also the home of politicians Eamon Gilmore and Mary Harney, and hat designer Philip Treacy. Cathal Mannion has brought home an All Star award, as did his opposite number Maurice Shanahan of Lismore – both in 2015. Both of their brothers can hurl too, with Padraig Mannion nominated that same year while Dan Shanahan was the 2007 Hurler of the Year. The point being, there will be a wealth of star power sparkling at O’Connor Park this Sunday. The Galway parish is used to success too, well certainly the footballing side of it is where adjacent parish Caltra won the 2004 All-Ireland SFC club title when the Meehans — Michael, Declan and Noel — did the scoring. Ahascragh-Fohenagh were not a leading light in the Galway teams in the 80s and had no players involved for the September finals in 1990, 1993, 2001, 2005 and 2012 — but the two Mannions put the town on the map in the 2015 where they lost out to Kilkenny. It’s expected to be an uphill battle against the Shanahans and Co. 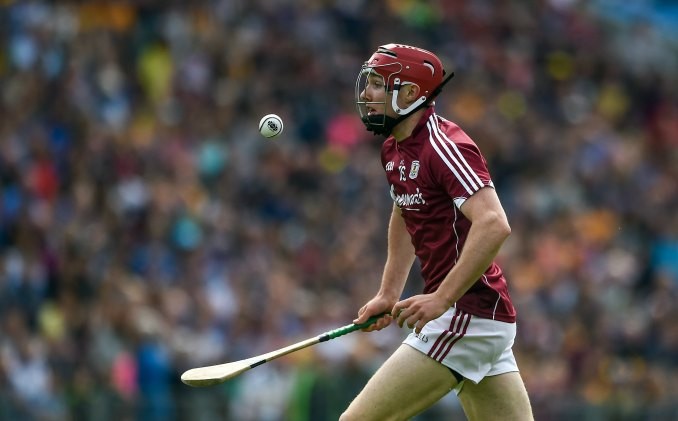 Burgess-Duharra have been dominating Tipperary in recent seasons but it’s been a long road to this stage of the competition, having finally won a maiden AIB Munster title. They had to do it the hard way against Borris-Ileigh in the county final and only won on that occasion after a replay.

Their main threats come in the form of Eimear McDonnell and the two Kennedy sisters, Amy and Tara, all of whom have an eye for goal. The latter has been in excellent form this season, and so too has Jenny Grace who has been a sharpshooter on free-taking duties.

Loading the bullets for the forwards has been Caoimhe Maher at midfield who likes to double up as a sweeper in front of Tishy O’Halloran, a cover which no doubt Slaughtneil will be hoping to get through.

McDonnell, who is a former All Star with the county and has the most experience on the team, will be Burgess-Duharra’s go-to player and don’t be surprised if one of the Kennedys pops up with a goal coming down the flanks.

Slaughtneil have a cause and no doubt the passing of Thomas Cassidy — father of players Aoife, Brona and Eilis — who was a huge driving force in making the club what it is today.

He played a big part in delivering the community project known as ‘An Carn’ which added to the local sense of identity. As hurling and football captain Chrissy McKaigue explained after their Ulster double, he was the man coaching, driving kids to games, and how the teams are energised by his spirit and his legacy.

No doubt honouring his memory will play a part for Slaughtneil in their performance against their Tipp counterparts.

Thomastown scraped past St Vincent’s to reach this far and no doubt they’re in the mood to end an 11-year barren run for the count since St Lachtain’s did a three-in-a-row from 2004 to ’06.

Shelly Farrell was also part of the Kilkenny team that won a first All-Ireland in 22 years under Ann Downey in 2016, and her spectacular goal effectively ended Cork’s comeback attempt in the O’Duffy Cup decider.

It’s often fine margins at this level, as opponents Sarsfield well know. They needed a replay to defeat Mullagh in the Galway county final, and a goal from Siobhan McGrath helped them to that first title.

Maria Cooney and Tara Kenny provide an excellent threat up front and will take watching from the Derry side in Birr.

Cappataggle of Galway) will take onMyshall of Carlow in the first of the two AIB All-Ireland intermediate semi-finals.

The Tribal County side took down Ahascragh/Caltra while the Barrowsiders took down Shinrone of Offaly.