He is taking on arguably the most difficult challenge yet in ‘The Toughest Trade’ series yet Wexford hurler Lee Chin cannot wait to swap a sliothar for an ice hockey puck next week. The 24-year-old is already no stranger to switching sports, having played senior hurling and football for Wexford and soccer for Wexford Youths. Yet even Chin’s impressive sporting versatility is set to be tested to its limits after he agreed to try ice hockey as part of the third instalment of AIB’s unique sporting trade series. The six foot tall Faythe Harriers star is headed to Canada in a week’s time to immerse himself with the Vancouver Canuck’s ice hockey team for six days.

Compared to the GAA stars who have traded sports in the previous two series - Jackie Tyrrell (baseball), Aaron Kernan (soccer), Aidan O’Shea (American football) and Brendan Maher (cricket) - Chin has the extra challenge of having to learn a whole new form of movement before he starts. “Yes, my biggest challenge is going to be the actual skating. I’ve been practising and can go backwards a bit but not in any clear direction!” he joked. Chin’s only previous experience on ice was the odd social Yuletide skate but early-morning visitors to Wexford’s Winter Wonderland may have spotted him getting in some serious early morning practice last December. “I got in about six or seven times over Christmas. They let me in at 8am on my own before they opened to the public and I practised in all the gear, with the stick and puck,” he explained. “The stick is so long it comes up to my head even when I’m wearing skates and the padding and gear weighs about 15kilos alone.”

Chin was surprised and delighted to actually find a willing coach right in Faythe Harriers, “The first day I went training with a guy from Kilkenny who plays for the Belfast Giants who told me that there was a guy in my GAA club, Damien Roche, who also plays for them. “I knew Damien already but had no idea he was originally from Canada and was an ice hockey player!” Chin admitted. “He moved to Ireland when he was around 10-11 and he’s very good. He gave me massive advice and it was much easier to train with the two lads than on my own. They were a great help to me. I find the skating tough but when I put the puck down and have the stick in my hand it’s easier,” he revealed. “It’s nothing to do with balance or using the stick to hold me up. It’s like, psychologically, it seems to take your mind off the skating and you relax. The guys kept telling me I was too tense. Once I had the stick in hand and went around the rink with a puck I did everything much more naturally.” 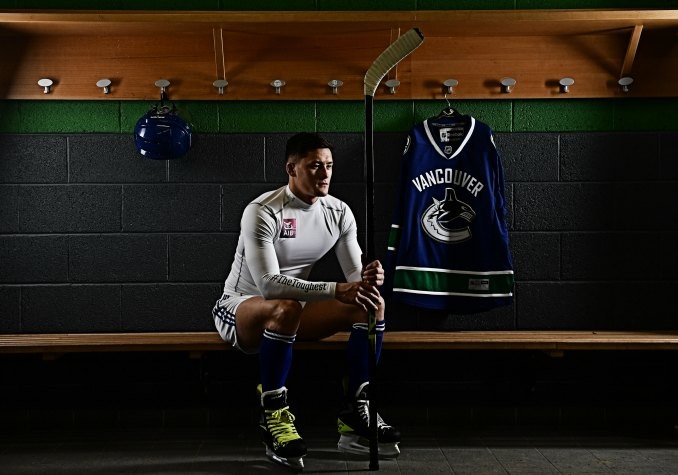 Chin immediately said yes when we (lucky for us) approached him two months ago because “ever since I was young I’ve loved every sport. Plus when will I ever get a chance to try something like this again?” He was already a huge fan of #TheToughest concept and was glued to the two previous series. “I loved them. It was very exciting, especially the first one, to see a hurler of Jackie Tyrrell’s status taking part. Everyone wanted to see how he got on at baseball and obviously how the guys coming over from other sports would get on in hurling and football. “It’s also given us a great insight into how professional athletes live their lives and I’m really looking forward to that aspect of it in Vancouver.” “I try to do well in anything I do and I’ll be representing Wexford and the GAA over there. I will be doing everything to prove that us GAA players, as athletes, can go into any other sport and compete,” Chin proudly said. “I genuinely believe we’re up there with other top athletes because there are so many attributes in hurling and football – physicality, speed, strength and agility – that you need in most sports. GAA has a combination of all of them.

“I’ve been told ice hockey players only stay on the ice for 30 to 60 seconds at a time. They have rotating subs because it’s such a physically demanding game. “I can’t see it being any more physically demanding than what county hurling and football is these days but this is definitely my chance to find out,” he added. Once he got the invite Chin immediately consulted with new Wexford hurling manager Davy Fitzgerald. “I obviously had to clear it with Davy first because I’m missing a week’s training. He was more than happy to let me proceed once he knew how much preparation needed to go into it and when I was going, and for how long.”

Chin was part of Wexford’s brilliant comeback to beat Limerick in their Division IB opener last weekend and will leave after next weekend’s game against Galway, fitting in this unique sporting swap within the break in the hurling league. “Davy hasn’t mentioned anything about injuries but I think he has the producer well warned!” he quipped. He’s hoping to take part in a full game which should be a real baptism of fire so, what’s the best advice his Canadian counterpart and ex-Canuck star Alex Auld – who has just returned home after spending a week hurling with Faythe Harriers – give him? “The one thing Alex emphasised was to keep my head up while I’m skating. I’ll have to keep one eye on the puck and probably the other eye out for some fella looking to clean me!”