Michael O’Hehir didn’t know whether he’d be heard or if his voice was simply vanishing into the ether.The legendary commentator was calling the last ten minutes of the All-Ireland final between Cavan and Kerry but there was an issue. He didn’t know what was going to happen... which we'll come to in time.

It was 1947 in Ireland: Big Jim Larkin of the 1913 Lockout had passed away, the Soviet Union were blocking our entry into the United Nations, and the Poulaphouca Reservoir had just been completed.

As a goodwill gesture to the Irish diaspora of America, the biggest day on the GAA calendar was brought over to New York, now 70 years ago. It was the one and only year in the history of the sport that an All-Ireland final was held outside Ireland.

It has been also suggested that it was a means of commemorating the great famine of 100 years previously. In any case, Canon Hamilton of Clare had lobbied the GAA Congress for three years before he got his wish to take the game across the Atlantic. 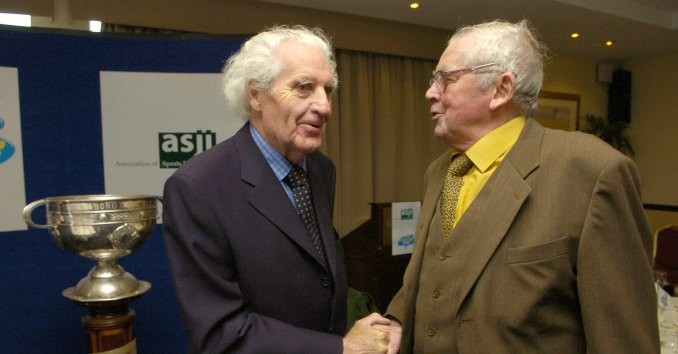 John Wilson of Cavan (left) and Gus Cremin of Kerry

The Kingdom had ousted Meath in their final-four meeting and, in the other semi-final, the Breffni County accounted for Roscommon. All of which meant league champions Cavan and Kerry were the two counties given the distinguished honour of flying the Irish flag in the US.

The two counties made strikingly different travel arrangements. A majority of the Cavan side undertook a 29-hour flight – including a stopover on the Azores island – from Shannon to New York whereas the Kerry team hopped aboard the SS Mauretania from Cobh for a six-day journey.

“Unfortunately with delays and one thing and another it took us 27 hours to get there whereas nowadays you’d do it in seven hours,” once said Cavan’s Mick Higgins, a man who was originally born in the Big Apple. “It was the first time I’d been on a plane and I wouldn’t say I was afraid but you’d be inclined to be a bit nervous all the same.”

Radió Éireann sent O’Hehir over to cover what would be the company’s first live radio broadcast from outside Ireland. Typically Irish, there was panic leading up to the game because they hadn't booked a line on which to broadcast the game. True to Irish form, they got it ironed out in the end with one ordered from 3:30 until 5pm New York-time. A narrow window but one big enough to squeeze the game through. That would be too simple though, wouldn't it? In character with our people, the game wouldn’t start on time, meaning trouble was afoot.

Kerry wore white, tipped jockey caps to shield themselves from the sun, and took an early lead at the Polo Grounds. However, a combination of tactical switches – and presumably the toll of the exhausting sea-journey on the Kingdom County – allowed Cavan drag themselves back into the game.

“It was a very hot day in New York for the final and it got even more roasting as the day went on,” explained Higgins, whose goal helped pull Kerry back. “The football was fast too and you could feel the energy being sapped from you.”
The pitch didn’t help matters. After all, it belonged to a baseball team, the New York Giants, and as well as the field being hard and bald in places, there was even a noticeable mound on the pitch. 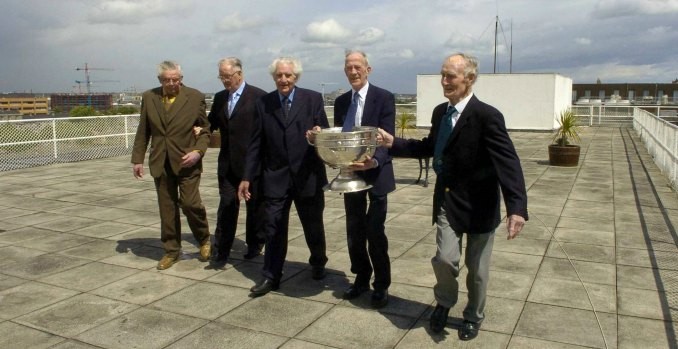 Surviving members of the team in 2005

Joe Stafford scored the other goal for Cavan but it was the point-scoring of Peter Donohoe — whom the New York media would don ‘The Babe Ruth of Gaelic football’ — that put the Breffni men into a strong position.

O’Hehir was not feeling as confident in the commentary box as the hoped and prayed that his calls were being heard 3000 miles away in Ireland. It was now 4:55pm and the broadcasting line was due to shut down at 5pm, but still there were ten minutes left in the final. O’Hehir pleaded blindly and hopefully down the airwaves for the coverage to be allowed to continue and luckily someone was listening, as he was able to talk on until the final score: Cavan 2-11 Kerry 2-07.

Higgins, who nailed 1-2, would win his first All-Ireland in the city of his origin. “It was a great experience but, funnily, the Polo Grounds hadn’t nearly the atmosphere of Croke Park even though there was around 35,000 people at the game. But who knows, maybe we wouldn’t have won the Sam Maguire if the final had been played in Croke Park.”

Owen Roe McGovern was the final member of the side to pass away in 2011 and once said of the scenes: “The celebrations were great afterwards. We were wined and dined and never let buy a drink anywhere. There were a lot of people who wanted to celebrate with us and they all wanted us to come into their pub afterwards.

“There were big celebrations when we came home as well. We came back on The Queen Mary and when we arrived in Dublin the welcome we got was terrific. We got a bus down to Cavan and there was nothing to beat the celebrations.”