Paddy Stapleton: 6 players who have had a breakout Allianz League

Paddy Stapleton has identified six players who have had a breakout Allianz league. For some, it’s been the birth of their inter-county career; for the likes of Podge Collins, it has felt like a rebirth. 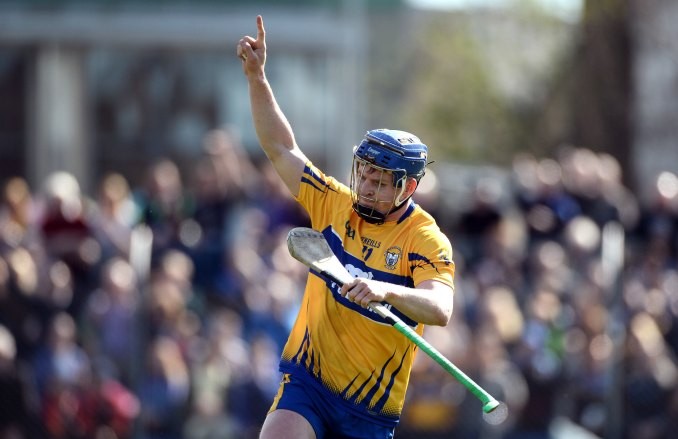 Podge Collins’ silky finish on Sunday against Waterford confirmed his status as the player of the Allianz league so far. It is more a re-breakout than a breakout for him but, considering he hasn’t hurled full-time since 2014, suffering a cruciate injury in between, it feels like a completely new player.

For a couple of years he tried to balance hurling and football which saw him on and off the Clare hurling team, never looking sharp when eventually being introduced, and now we can see what they were missing. His close control has been razor sharp: last Sunday a ball was mis-cleared by a Waterford man in the first half, coming at Podge fast and awkward, but the Cratloe man controlled it like he was pucking against the wall at home. Collins’ option-taking is brilliant too, perhaps a side effect of being a good footballer. He has taken some great scores, none more than the street-hurling finish against Waterford which he floated over Stephen O’Keeffe, but also knows when to carry the ball too. One of his great assets so far has been his ability to recycle the ball when running or shooting is not the right option. He has a great ability to twist and turn with that Jason Robinson-like sidestep, allowing him to offload to a team-mate in space and continue the attack.

The real danger is that he gives centre-backs a massive headache. He seems to drop deep, or to the wings at the right times. If his man goes marking him they leave huge space inside, but if they stand off him he has shown such an ability to pick out his inside forwards. What Clare wouldn’t give for Conor McGrath or even Darach Honan to be on the end of that supply. Apart from his physical attributes, Collins is a crowd favourite and leader for the Banner. When he went out of the game against Waterford, the tide turned in a tight game. He will need some help come championship. 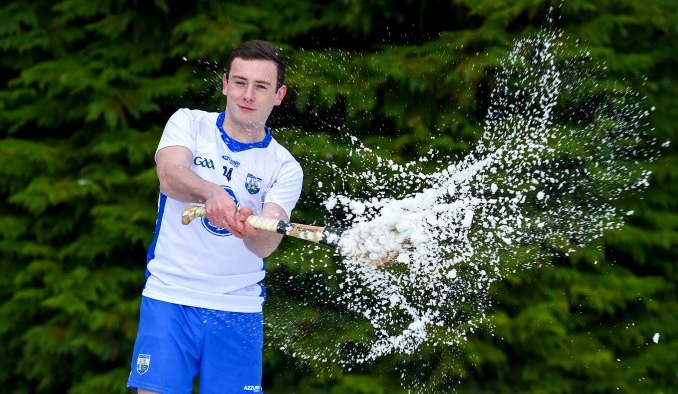 I said in a pre-league article that the two Bennett brothers will be burdened with a lot of responsibility if teams focus on stopping Austin Gleeson. Both Shane and Stephen have done well but I really like how the latter has gone about his business this spring. Without Maurice Shanahan they have needed a physical presence and he has been a constant threat around the oppositions’ 21.

Stephen has been a regular scorer in all matches but it's his unorthodox style on the ball that makes him stand out. He has some great flicks and pop passes which is normally the sign of a player trying to get rid of the ball or not being confident to take it on, but not in his case. His offloads are hard to read and so he can open up a defence in a split-second. We knew that in Tipp from the Munster U-21 final last year.

Although he has lovely touches, his reading and anticipation is what gets him into these situations. Rarely does his man beat him out in front for a ball. He is also a great worker and has been tackling hard, most evident in his two goals against Dublin. The first one bounced off the crossbar and he was wide awake to finish; the second a lost cause, chasing in towards the ‘21 when it looked like the Dublin ‘keeper had everything under control, and he got his reward when capitalising on a mistake. This doesn’t happen by chance. It’s the Bonner Maher or Johnny Glynn approach to defending from the front. The more you get yourself in and around the ball the more likely you are to get on it.

He will be watched closely in championship and the only thing I haven’t seen so far is a presence of a competent weaker side when shooting. With less space in championship hurling, we might have to see this side of his game more.

This lad has been brilliant so far. Don’t be fooled by his less-than-prolific scoring record, he has contributed so much to that Cork attack, even when the team has underperformed like the night Dublin beat them in Pairc Uí Rinn. Liam Rushe didn’t know whether to get tight or sit back, such was Meade’s movement and ended up being caught in no man's land – not where you want your centre-back.

Meade is as natural hurler as you will see. Rarely checking his stride when coming onto the ball and his pick-ups, even in the muck of Walsh Park, look effortless. It reminds me of how Lar Corbett does it without really even bending down. Like Podge, he has played centre-forward, and supplied fantastic ball to his inside forwards. Cork have been crying out for this type of player to complement skilful forwards like Alan Cadogan, Conor Lehane and Pat Horgan. Someone who can knit this unit of individuals together.

When he played closer to goal in the Fitzgibbon final for Mary Immaculate College, he didn’t look as effective. This is natural as he is not a big robust man, and so needs to space to show his ability. He has some engine and when it was close in the latter stages against Waterford, he was the one taking the breaking ball from the full-forward line and finishing to seal the win. It’s exciting to see how much better he can get when the ground hardens and the ball dries in a few weeks’ time.

It’s been nice to see Steven O’Brien shut up some of the commentators doubting his inclusion on the Tippeary panel. After many years split between hurling and football, it was understandable that it would take him a year to get fully up to speed. It was apparent during training towards the end of my last year in 2016 that he was getting up to the standard. He was giving defenders a really hard time and he is now getting his rewards for keeping his head down and sticking to his guns. It would have been a very easy option for him to go back playing football when they have been going so well over the past year.

He has really made up for the loss (on army duty) of Bonner’s physicality from the half-forward line. In the Clare match he drove through the middle on numerous occasions and dragged multiple defenders with him. He is a class athlete and so fast for a big man. If he can improve his decision-making so that he knows early in the play whether a pass or shot is on, he can be a big threat for Tipperary this summer. Unfortunately his stick work will sometimes let him down but I would forgive him for what he does the rest of the time.

He only played a few minutes in the Kilkenny game and didn’t feature against Cork so I expect to see him back playing in the knockout stages. It may just be a coincidence that Tipp won neither game, or it may be a knock-on effect of leaving out a physical, fast half-forward.

The guy has been a breath of fresh air this season. I had never heard of him before his 2016 championship debut but he has a style that can’t be ignored. He has it every way physically. Against Tipperary on a wet, windy night he had the strength for Seamus Callanan.

He has caught multiple dropping balls under pressure from a standing position in games so will never be intimidated by size. In the game against Cork he was able to keep up with Alan Cadogan who must be the nippiest forward in the game. Those attributes are a great starting point for an inside back and, when he does win the ball, he tries to get his head up more often than not. Although he attacks the ball with a lot of courage, it is still a learning process and could be a weak link too. It is a thin line in the full-back position to be getting on so much ball because it can lead to your man getting room too. I can remember hitting an awful lot of ball against Kilkenny in the Allianz League final of 2009, but when I looked back on it ‘Taggy’ Fogarty had scored 1-05! Okay, many of the scores weren’t my fault but you need to be conscious of your man in those vital positions. As a full-back you need to think about the team conceding the goals as much as attacking the ball; you are the last man back and can’t forget that. 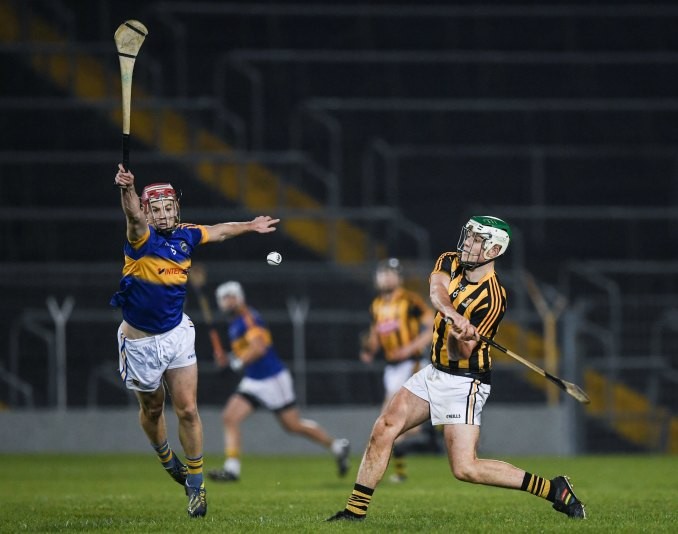 He has gone about his business quietly but very importantly since coming into the Kilkenny line up this year. The Cats have a lot of very good hurlers and so a sticksman was not a priority, which is why Deegan has worked so well. He knows his job is to be physical and break up the play which is what he has been doing in abundance. He looks like he has absolutely no respect for his body, the way he throws himself around. The partnership with Cillian Buckley has made Kilkenny hard to play through again, and while he does not look very silky, he still drives forward when on the ball.

With Michael Fennelly’s fitness in doubt, it has been important to get someone to step in without robbing the forward line of Richie Hogan or TJ Reid. He has also assumed the captaincy and it is a really good sign that it has not been a negative talking point in hurling circles even though he is new to the team.

When the ground hardens it will be interesting to see if he can keep up to the pace as conditions have been soft so far. He has very limited experience and so still has a lot to prove.