Pádraic Joyce: Give me analysis over opinion any day

“Is the @LeagueSundayRTE and @TheSundayGame not for ANALYSING games ..? All we are getting is opinions. #RTEGAA”

I wouldn’t be a great man for the auld social media but this tweet I put up last Sunday night generated a few likes, so clearly I said what others were thinking. I prefer analysis to opinion, and I think a lot of GAA people don’t even watch it at this point.

I wanted some insight into the decision to take off Cian O’Sullivan, and why Dublin put on Kevin McManamon and Michael Darragh Macauley after taking off the centre-back and Ciaran Reddin. How did Kerry stop O’Sullivan having such an influence on the game? Jim Gavin made the bold substitution in a bid to win the game which nearly paid off as UCD Student Mannion contributed 1-2 from play.

The Dubs gave away seven frees midway through the second half and Philly McMahon was twice reduced to panic tackles - with a closed fist on one occasion - and O’Sullivan also gave away a free for a pull of the jersey right in front of the goals. The bottom line was that the Kingdom had put the All-Ireland champions under huge pressure and it was telling. The Dubs were panicking, giving away easy frees and easy ball.

Dublin handpassed and kicked away some easy ball which were taken full advantage of. Kerry came with a more attacking mindset but they played on the edge too. Jonathan Lyne was black-carded for hauling down Diarmiud Connolly but I felt it could have been red: it was high and dangerous. We got no analysis into the role Peter Crowley played, who in my opinion was the best player on the pitch. He was immense in defence, and then getting up and down the field supporting his forwards all day.

Bernard Brogan didn’t shine for Dublin last Sunday but I am a firm believer that you are only as good as the ball coming into you. Bernard was well shackled but the quality of ball into him was terrible, he had no chance.

Ciaran Kilkenny doesn’t kick enough of the ball he gets, he is handpassing 80% of it laterally or backwards; so how can inside forwards operate when you have a middle third man not supplying quick early ball inside? Ciaran got huge praise last year on the ‘Sunday Game’ for handling the ball 37 times against Dublin but what they failed to analyse was that 30 of those balls were hand passed backwards or sideways. Another game, for the record, in which Brogan was taken off. 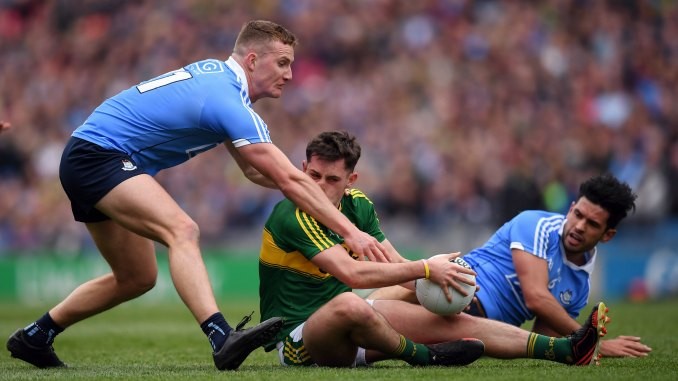 The Dublin inside forwards simply didn’t get early ball and this is also due to the pressure Kerry put on around the middle third. Kerry also on occasions pushed up to great effect which meant Stephen Cluxton had to kick 50-50 kickouts and David Moran profited big time.

The week leading into the game, Eamonn Fitzmaurice came out in the media talking about an orchestrated campaign against Lee Keegan last year which had an influence on his black card in the final replay. I agree on this point, because Keegan didn’t deserve to get the line, and perhaps it was a case of evening it up after Jonny Cooper had been put off.

The ex-Dubs were out in force in the media then and even Paul Curran after the league game in Tralee saying Kerry were guilty of “shameful” play. Fitzmaurice had to level the playing field, I’m 100% behind him on that. It shows his players too that they’re all paddling in the one direction when their manager goes public in support of them. Tomas and Darragh O Se and Bomber Liston all write articles in the media and none of them were throwing curve balls in Dublin’s direction when they had the platform. Fitzmaurice is a great GAA man, he was a tough uncompromising centre-back with a great football brain. I came across him a few times in my career and he’d always be first over to shake your hand after; whatever went on during the game was left on the pitch.

The GAA needs characters like Joe Brolly. I’m not trying to draw Joe Brolly onto me! After all, he is a more academically qualified and a more intelligent gentleman than I will ever be! But I can’t not mention him going on about the Gooch. Northern teams such as Tyrone, Donegal and Armagh always had two men around him and another one watching, unlike Cork and Mayo. That has to be understood. When did you ever see any forward kick 1-4 or five points from play against those aforementioned teams in their heyday?

I once got a rise out of Joe by reminding him of the 1998 All-Ireland semi-final against us, he was taken off well before the final whistle sounded because Tomas Mannion had him in his pocket from the first minute. He was giving me guff one night after a charity game and I said “Joe, I’ll get Tomas Mannion after you..!” which quietened him! I always remember the camera panning to Joe just after half-time and he’s on the bench rubbing his head, whereas he’d been off blowing kisses to the crowd in Clones just a few weeks earlier after big Geoffrey McGonigle handed him one on a plate. So I am just not sure Joe is so qualified to give such a heavily-weighted opinion about the Gooch not scoring against these teams when he will be hard pressed to name someone who did. Sometimes, if you have nothing positive to say in certain situations, you are better off saying nothing at all.

One cost-saving measure that RTE should look at is this: the next time they use Joe, they would be better off getting him on alone as the people on with him rarely get a word in anyway. Even when Joe talked about the Galway-Kildare league final, he just dismissed it as a terrible game. Now, I will say that the intensity levels were light years off what Kerry and Dublin produced but it was so important for Galway to get back up to Division 1 for 2018. But to also win the final in Croke Park and stop all the talk there was about not winning there for so long. There were 34 points scored in that game too. 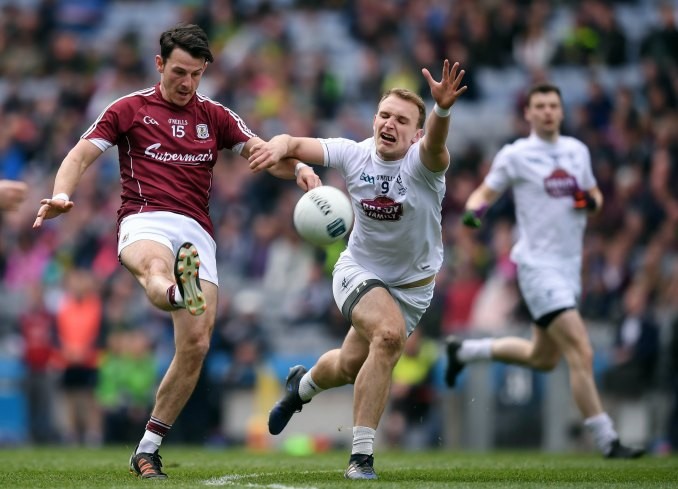 Kevin Walsh is building well with Galway. In previous years, not all players were togging for the county team but now I can’t think of anyone not in there that should be. He has assembled a good squad for championship and I expect a lot of the younger lads to make a big impact this summer.

All those boys who won the last Under-21 title with Galway, they’re turning 23/24 and now is their time. This is when you deliver as an inter-county player. Shane Walsh didn’t have a perfect game the last day but he has the quality that he needs to deliver and become our main man upfront for the next few years.

We didn’t have enough bodies in attack at stages which is acceptable on such a big surface as Croke Park but you can see what they are building towards. We are trying to get a defensive strategy in place to stop us conceding big scores like other years, but we haven’t quite mastered it just yet. Nor the transition to attack at speed from a defensive set up.

Sean Armstrong is back this year and on Sunday I loved watching him play as a real forward should. Running across the inside line, making himself available, taking on his man and scoring. Sean is an out-and-out corner forward and with the correct supply of ball he will get scores.

I think Kevin has had to mind the lads who are still with the Under-21s, and he has been very fair to them and their management in the last few weeks where games were coming thick and fast in both codes. Saturday’s Under-21 semi-final against Kerry will be some encounter.

Michael Daly will be a great option for us this year, after coming on and kicking two great scores. It’s great to see Michael Meehan back in the squad also. I played with Michael for numerous years and he was always 100% committed to the cause, and guilty maybe of putting his body on the line too often is what caused him some injuries.

He’s been out of the inter-county scene for two years and perhaps he felt he wasn’t leaving on his terms. My advice to him was to listen to his body as he had a serious ankle injury. He would be so influential around the squad and the younger lads will learn a lot from his dedication and attitude alone.

I see his part being 10 or 15 minutes in a championship games where we need to kick a score, or convert a free — he has the quality when the pressure is on. No one would ever question his talent.