Pádraic Joyce: Mayo will need to score goals to win this game because I can’t see them kicking 15 or 16 points

Galway will go in as underdogs against Mayo this weekend even though they are home in Salthill but it was the same for us back in 1998. We had a very young team back then, which looked even more inexperienced compared with a county that had been to and lost All-Ireland finals in 1996 and 1997.

This was knockout football back then too, it wasn’t until 2001 that the qualifiers came into play. It was a first year playing senior championship for Derek Savage, John Divilly and myself; Michael Donnellan, Paul Clancy and Tomas Meehan had played once the year before. Four of the six forwards that started for Galway in against Mayo in ‘98 were left-footers and I remember them saying on the ‘Sunday Game’ that we might roll off the left side of the pitch and back down to Tuam we were so imbalanced. But there was a real challenge to finding a balance in that forward line, and John O Mahony did a great job to organise it.

We went down to Castlebar and turned them over, just about; I remember Ciaran Mac rattled the crossbar in search of his hat-trick, and had he done so, it was curtains for us. So these Galway-Mayo games can be decided by small margins. We knew winning that game that we had just beaten the All-Ireland finalists of the past two years, and we were not far off the pace if when we could achieve that.

Now it’s a bit early to be talking about All-Irelands with this Galway team but there are similarities in terms of this game. Kevin Walsh, who was midfield back then, is manager now and he will have us buzzing for Sunday in Salthill. 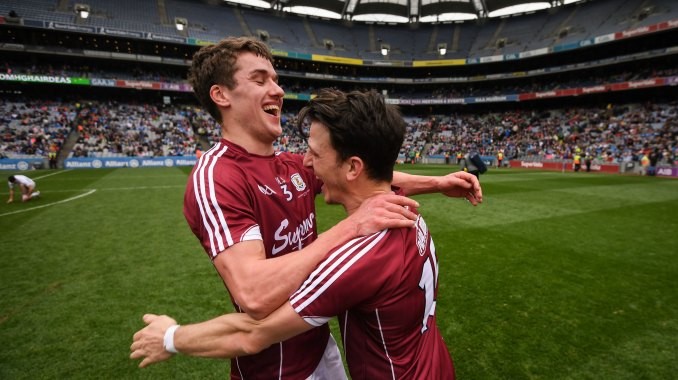 Stephen Rochford will be aware of that. It’s not just us supporters who see the chinks in the armour, and what you often find then is that the game is decided elsewhere. I think that will be around the middle sector where there will be six huge men. Paul Conroy, Fiontan Ó Curraoin and Tom Flynn will be in there for Galway and I’d expect Aidan O’Shea to join his brother Seamus and Tom Parsons between the ‘65s for Mayo. Whoever wins that battle will get on top, and then it’s up to the half-backs to deliver good ball inside. The quality of ball will be better going into the forward line if you are on top in this sector and this is where I feel the game will be won or lost.

Galway have the better scoring forwards, being honest. The better spread, too. Shane Walsh and Damien Comer have been there for a few years now and it’s time for them to make their mark as serious senior inter-county players. Michael Daly and Sean Armstrong too are capable of putting up scores. I ran into Sean a few weeks ago and he is in great shape, looks very toned, and the thing was how excited he is about getting back into the fold. His best position is at 15 but too often down the years he was being played everywhere in the forward line. He can score, win his own ball — everything you need from a corner-forward.

I played with him and Michael Meehan but we didn’t line up too often in the same inside line with Michael at 13, myself 14, and Sean at 15. It’s hard to imagine Michael playing a big part on Sunday because he hasn’t kicked a ball in three years for Galway. His quality isn’t in doubt but even recently for Caltra in the first round of the Galway Championship, he came off after 16 minutes with an injury. Kevin will know if he has game-time in him.

I feel Mayo will need to score goals to win this game because I can’t see them kicking 15 or 16 points this time around against us. I know they gave us a tanking a couple of years ago but Kevin has tightened us up a lot. Sometimes what Galway produce isn’t the prettiest to watch for the Galway traditionalist, but we need to compete with the bigger teams out there and we needed to get that defensive side fine-tuned so we were competitive again. Kevin has brought us back up to Division 1 which is great for player development and Galway are a top-8 team now.

The one thing Mayo definitely have is more experience, and I understand why some people would see that as being the difference if the game is tight. Lee Keegan is an outstanding footballer and can mix it up also, Aidan O’Shea, Cillian and Diarmuid O’Connor are serious footballers, Colm Boyle is tough as nails, and Keith Higgins has shown his class for years. They also know how to play refs and engineer frees if the situation requires it. Mayo are in serious physical condition also and Galway will have to match them in the big exchanges during the game.

I remember two big hits Diarmaid Blake and Damien Burke put on Peader Gardiner and Ciaran McDonald in different games over the years which set the tone for Galway victories. Not forgetting the hit Colm Boyle got on Damien Comer in Castlebar three years ago either. Both teams have had this date in their minds since last November so they will be ready for the physical challenges.

But I think Kevin will have been coaching a bit of his own cuteness into Galway and I can see them being very hungry come Sunday. Not many expected Galway to beat Mayo last year except the players and management and they will want to prove their worth again come Sunday.

The maroon shirts came out on top last year and we all know how Tipperary caught us, whereas Mayo went all the way to a final replay against Dublin. At the time, while we celebrated the victory, all the Mayo fans in Castlebar had been saying to me ‘let’s see who goes further this summer’ and they were right. Galway need to prove that 2016 wasn’t a fluke, and that they’re better than the quarter-final collapse against Tipperary.

There is a huge demand for tickets this week but so far the hype has been low enough, that’s probably down to the back door being there as a safety net for the race to Sam Maguire. It’ll probably ramp up as we get closer to the game in Salthill.

Championship is where you are rated and, if the game is close, we’ll see if the Galway players are good enough for the step up or if Mayo still have the bite and desire to help achieve their ultimate goal. It would be a huge loss for Mayo to suffer at this stage of the season and have to enter the back door again. The draw might not be as kind this year as it was last year for Mayo so they will come to Galway with a real purpose, that is for sure. This game in my mind will be the first proper competitive championship game this year.

My instinct says that Galway are improving all the time, that they have more scores in them than Mayo, they also have plenty of pace in the team now. But they have to do it when it counts, and I think the front door is the only one worth going through this year. You will have a Donegal, Tyrone, Monaghan, Cavan, Cork or a Tipperary laying in wait, so it’s a huge game for that reason too.