Pádraic Joyce: Where next for Donegal?

Being 12 points to five down at half-time, Donegal would’ve had to break ranks to reel Tyrone back in during their Ulster semi-final.

They would’ve had to move away from the game plan and system initially implemented by Rory Gallagher to win. It would have involved pushing up hard on Tyrone and also putting Michael Murphy on the edge of the square, but realistically this was never going to happen.

So instead they were beaten heavily and were lucky that there were just nine points between the sides at the end. Teams need that adaptability in games to be successful, so Donegal must find that with these young guns.


The thing is, it was 0-4 apiece early in the game when Eoin McHugh cantered through the Red Hands defence and into Niall Morgan’s area. Had that gone over, things might have been different, but Mickey Harte’s men went on to score eight of the next nine points and it was game over. Tyrone were actually 4-2 down after 13 minutes and went in 12-5 ahead at half time.


Harte would have been delighted to see Michael Murphy posted on his own ’45 for so much of that first half. What made it all the more galling was how much of a threat the big Glenswilly man was once he was in attacking positions.


I personally believe that for Donegal to turn their season around, they need him closer to goal on more occasions during the game. Even look at how many bodies Tyrone committed to the attack; if Murphy was in a more forward position, Harte would be less inclined to push so many up-field.


Tyrone could just bomb on at will but then again it is easy do this when you are defending a lead and picking off scores on the counter-attack.


The reigning Ulster champions are back into the provincial final and, at this stage, you have to look at them as definite All-Ireland contenders. All the same, they will face stiffer challenges than last Sunday. 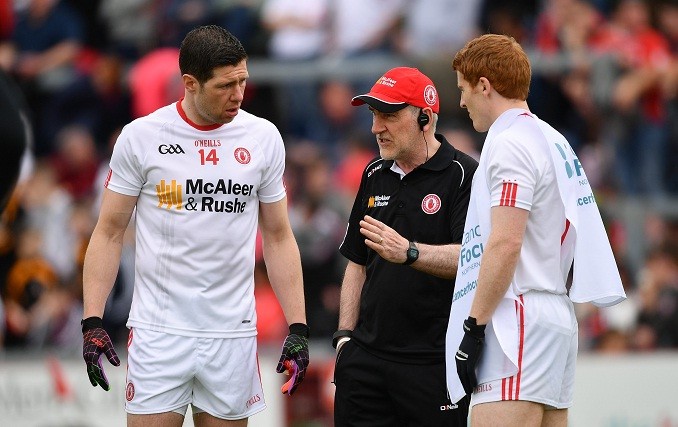 Mark Bradley was making great runs inside, Mattie Donnelly and Peter Harte ran the show, Sean Cavanagh was heavily involved, and Tiernan McCann was brilliant from wing-back. He has turned into a very mature footballer and he never panicked when he was through on goal. I will give him the benefit of the doubt and say that he meant to hit the shot into the ground to bounce it over the goalkeeper!

Colm Cavanagh was immense all throughout the game. Not just in winning back ball and defending, but catching kickouts and driving forward when the chance arose. Padraig Hampsey came up from the back to score 0-2 and could have made a goal from one of the attempts, and was one of 12 scorers for the Red Hands in Clones. I would see them next in the pecking order after Dublin and Kerry.


I know they didn’t play well last year against Mayo in the All-Ireland quarter-final and they paid heavily for it. But they’re evolving, as seen in how they scored 1-21 against Donegal, of which 1-19 was from play. How often has that happened against such a strong defensive unit?


I think Mickey Harte realises they needed more of an attacking potency and, allied to how they continually stripped Donegal when they carried the ball into the tackle, they have a great balance. But you would still have to ask the question: will they miss a marquee scoring forward in tighter games?


Where to for Donegal? Look they don’t become a bad team overnight. Rory Gallagher will have learned so much about his players from this defeat. They have so many young players, looked so open at the back, and were caught on the hop once they went a few points behind.


It’s a tough road back. Rory has a big job to lift them for the Longford clash but the players know deep down they let themselves, the county and their manager down. So they will have a point to prove. The one good thing is at least they drew a home game. Longford won't fear playing them but you would have to think they if Donegal apply the right attitude they should come out on top.


We might have had a few one-sided games but I’m really enjoying this championship. Tyrone-Donegal was interesting tactically if not very close, while Galway’s win over Mayo was highly entertaining. There aren’t as many blanket defences, the scoring has gone up, and the standard is good. More teams are realising that they need to hit the magic number of 15 or 16 points to win most games.


Kildare have certainly impressed me and Cian O’Neill has them in superb physical condition. There was uproar when he got the job ahead of some old Lilywhites legends but they’re seeing the fruits of his labour in year two.


They’re probably more confident going into playing a Leinster final than they have been in a very long time — of course it’s eight years since they’ve even been there. You’d expect Dublin to beat Westmeath in the other semi and they may still have too much, well you’d imagine so. 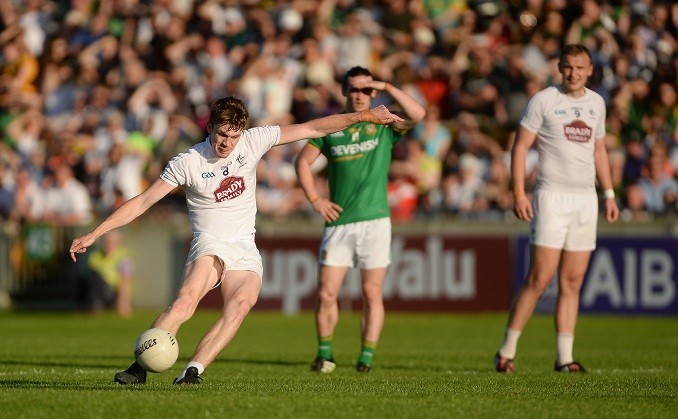 Daniel Flynn (1-4) and Cathal McNally (1-3) looked excellent against Meath and the midfielder, Kevin Feely, looks like a great prospect both from play and with the frees.


Even with their kickouts from Mark Donnellan, under the stewardship of former Lilywhite goalkeeper Enda ‘Hosey’ Murphy, gave them a great platform, and you need all these things if you are to have a hope of beating the Dubs.


Meath, on the other hand, have a lot of question marks now. It’s easy to say it now but when you think that they struggled to beat a Louth side who went on to lose to Longford, it gives you an idea of where the Royals are at. Meath have struggled with consistency over the last number of years and it's time for a lot of their senior players to look closely at how they are performing from game to game.


Meath need a run in the qualifiers to set themselves up for next season. So interesting times ahead yet and we haven’t seen a day in July yet.