Eyebrows stretched in the direction of fringes all over the country when Joe Sheridan was called up to the Meath panel as a goalkeeper for 2017.

The man they call Big Joe hadn't featured for the Royals since the 2013 season, after which then manager Mick O’Dowd deemed him surplus to requirements.

Sean Boylan first brought the then Seneschalstown man in for the 2004 campaign and he established himself as a target-man on the edge of the square, famously scoring the goal that should not have been in the 2010 Leinster final raid against Louth.

They meet their bitter neighbours at Parnell Park on Sunday in the provincial quarter-final. Paddy O’Rourke will be expected to start as he has in recent seasons, but it must’ve been unusual to see the name of a once-household forward being brought in as competition.

“Not really because I was out injured from the middle of October,” says O’Rourke. “I only came back training the second week in January, I came back from an operation on my knee.

“In the meantime, there was two lads in there with no inter-county experience at all playing in goals. There was no goalkeeper in the area to bring any experience to it.

“Joe there played a bit with the club but that was probably 15 or 16 years ago before he progressed out the field. It’s a young enough squad so the added experience and a throw of the dice to have him involved, to bulk up the experience.” 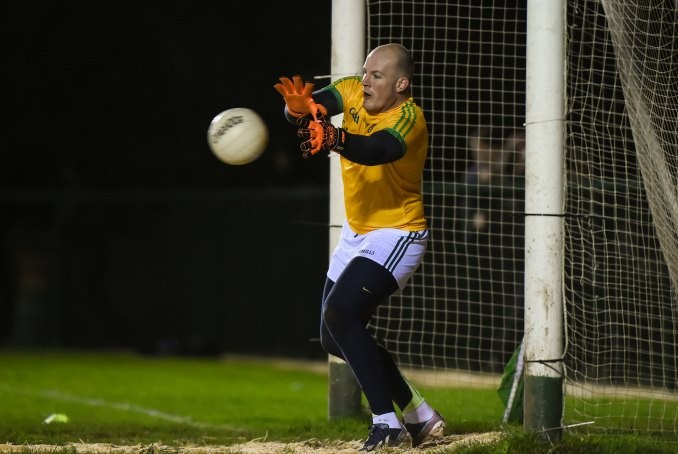 That’s something that has been evident on the training pitch as new boss Andy McEntee looks to restore Meath to the top-table of inter-county football.

“Ah yeah, any games that Joe has played… he played the second half there for us against Down in a challenge recently and was solid. He played a couple of O’Byrne Cup games and was solid as well.

“It’s an area now where shot-stopping as a goalkeeper is important but if you look at any game, you never look back and see a goalie having seven, eight, nine shots to stop in a game.

“It’s all about if you’re solid at a high ball and goodat kickouts, and if the ball lands short to you in-game if you’re comfortable. So he ticks those boxes.”

O’Rourke explains how the job of a goalkeeper has changed over the years. There was a time when netminders did more or less the same sessions as the outfielders, but it has been tailored in recent times.

So much of a team’s success lives and dies by a goalkeeper’s hands and feet. As O’Rourke delves into his duties, the science of goalkeeping becomes more and more apparent.

“No, we’d do probably 70% with the outfielders and we’d do 30% then (that is goalkeeper-specific),” he says. “There’s be a lot of shooting drills that you’d be in goals, kickout drills, and then you’d be pulled to one side and we’d have our own exercises to do that are goalkeeper-specific. A lot of training nowadays revolves around game situations.

“You have to be comfortable with ball in hand now, under the crossbar and kickout-wise as well,” the Skryne stopper adds. “You have to be accurate. A lot of emphasis is put on stats, kickouts and possessions, where you lost and won the ball.

“They’re instant, and you’ve lads (coming) on the pitch to you and they’re telling you your last five kickouts, 'we’ve won four in a certain area or four that were short so keep it up'.”

There are few better in the game at restarts and the new mark rule has provided an added dimension coming into this summer.

Kickouts are a game of cat and mouse, an ever-evolving chess battle. Some teams push up on short options, many drop deep, others invite you to give the ball to a lesser-skilled ball-player, while zonal marking is also on the rise.

“Teams try it yeah,” says O’Rourke of zonal. “There’s some teams who are better than others but if you can find one weak link, if someone does break the chain. If they’re going zonal, but steps and follows a run, that’s it, you’ve beaten it already because a defender will just pull into space and he can go short.

“The defender doesn’t have to be inside the ‘13, he can start outside it and get it on the end line if he wants. If someone breaks the chain in the attackers’ zonal approach, you get a quick kickout away. There are plenty of ways around it.

“You really have to push up man-on-man to combat the short kickout but all it takes is one man to make a good run to pull his man out of the way, and it leaves a big pocket of space to pop it into. With the mark now, if you can kick 40 metres accurately in front of a fella, it’s unstoppable.”

To his mind, there’s no real downside with the mark.

“No, sure if you have a lad who is good aerially and he’s 6’5” and you can isolate him one-on-one and drive it 70 yards and he catches it, then you've a free-kick 60 yards out from the opposition goals. It is a positive.”

Jarlath Burns, the Chairman of the Standing Committee on Playing Rules, has been floating the idea of an offensive mark where “if a ball is kicked from outside the 45 and it’s caught inside the 21 by someone on the full-forward line, you have a free shot at goal”.

“I think the tinkering around with the rules... every year, somebody has another thing and will bring it to Congress and hope it gets pushed in,” says O’Rourke. “I think there’s enough changes to the rules now so we need to let it sit for a while.

"Yeah they can try to improve the game but when people don’t fully understand them, it can make a mess of a game as well.”