The 31-year-old made his championship debut for the Royals against Antrim in 2005 under Sean Boylan, and his is a life geared towards maximising his athletic development.

After last weekend’s qualifier win over Sligo, Burke was back in the gym right away getting his body ready for Donegal in this Saturday’s Round 3A clash. The defender is very open about his lifestyle.

MB: “I suppose I would be a bit of a weirdo. I’d be a fanatic, I’m very interested in fitness and nutrition, that kind of thing. I had something inside me that I was always kind of dedicated and maybe that’s why I’m playing for so long.

“It’s definitely fitness, food and recovery that I’m interested in, and I’d be reading up on them and reading autobiographies by different guys, and guys that are playing to an old age. How they do it.

“I go to the gym before to fire my muscles up; I go to gym after games to loosen out as well. So I was actually in the gym there now which is why I missed your call. Ah no, everyone has their own things and I feel good doing it.” 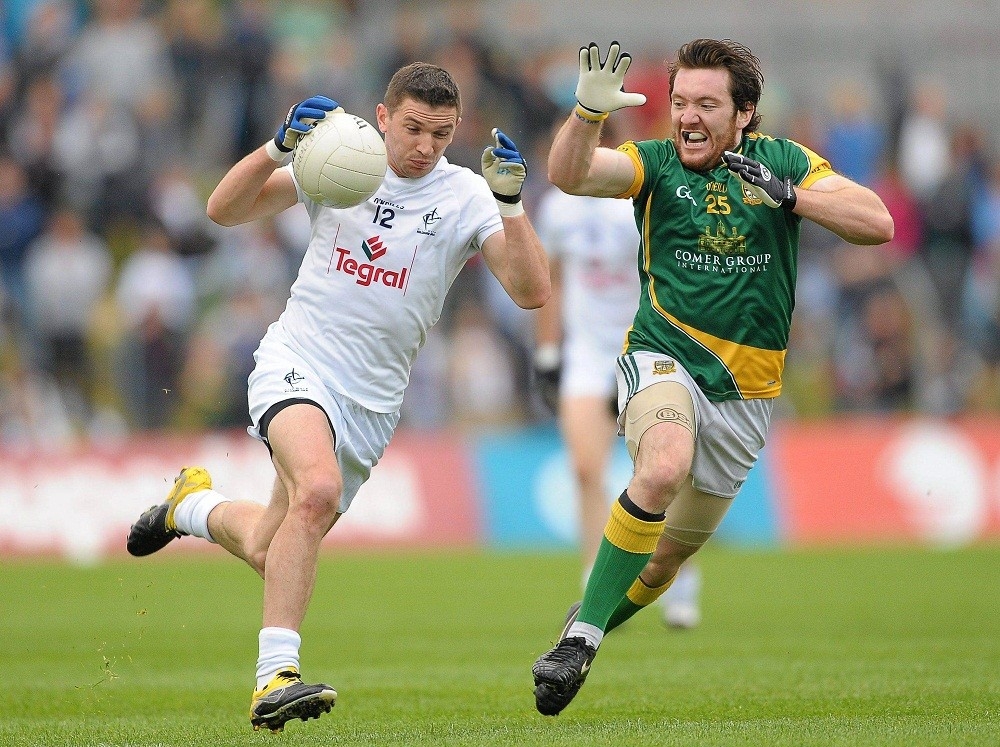 SS: Do you go to the gym on the same days as matches? Would it be muscle activation and stretching, or would you be lifting weights?

MB: “I do lift yeah. I’d hop on the bike for maybe ten minutes, nice and gently. Then I’d stretch out and activate the muscles, and then I’d do a few compound lifts. Maybe in total, we’ll say maybe eight or ten bench presses, eight or ten squats, and eight or ten power cleans.

“That kind of thing, and I was doing it for the last few years and I’ve never really told anyone. The S&C guys with Meath know I do it and I actually saw an article there recently enough and Paul Galvin said he did it too a good few years ago. I even do it for club games and I feel it wakens me up more than anything, I go for a shower and I’m set for the day, and you’re not hanging around worrying about the game.

“It kills an hour as well. I’m not absolutely pumping sweat, I would be a little, but then you have a nice shower and I just feel nice and loose more so than anything.”

SS: Just going back to the autobiographies for a moment; whose would you have read, and who are your influences?

MB: “I have my favourite players from Meath: Darren Fay, Trevor Giles and Mark Reilly. They would’ve been heroes of mine for Meath watching them in the 90s.

“But Kieran McGeeney is a guy I would have been fascinated with when I was young, and even to this day, I love the way he was so driven and dedicated.

“All the stories about how him spending 35 pounds on fruit every couple of days, all this kind of thing. He played until a right good age, maybe 36 and 37, and he changed his position. He moved with the times.”

SS: Ryan Giggs would be another who evolved and changed his training as he got older.

“Yeah Ryan Giggs, Brad Thorn, Donnacha O’Callaghan, Peter Stringer — I read all them boys’ books. I’d be fanatical about food as well; I wouldn’t be eating hardly any rubbish at all.

“I don’t really take dairy or gluten. Just any percentage; I’d be wearing the Skins in bed after games, that kind of thing. I could tell you weird stories, you know yourself, you have to be careful what you say.

“It’s just something I’m passionate and if it gives me an advantage — maybe it doesn’t — but in my own head if it does, that’s as good as anything.”

SS: Every time we see you on the field, you seem to have more and more tattoos. How did you get into them?

MB: “I always had an interest in them but I just never went for it. Then I started looking at the Maori lads’ — now I don’t have one — but their sleeves tell stories of their life and that sort of thing. That’s interesting and I probably got my first one in 2012 so all of the ones that I have mean something to me, or it’s about something that’s happened to me.

“I know people can get a bit cringy about their tattoos and talk a lot of rubbish about them. I have St Michael on my arm, the archangel, he is the man who is said to have killed the Devil in the Bible. My date of birth is there in Roman numerals, I have the county Meath outline on my elbow.

“I’m just looking at a few here to remind me, you kind of forget about them. I have oak leaves which represent Longwood where I’m from; Maigh Dearmhaí, which is Longwood in Irish, means plain of the oak.

“I’ve my mother and father’s portrait on my arm; my mother and father aren’t dead but I just thought you see people with the Devil and different things like skulls and stuff, and I thought these are real life people who mean something to you so I got them intertwined in the whole thing. I’ll keep going and I always have more ideas in my head, quotes and stuff.” 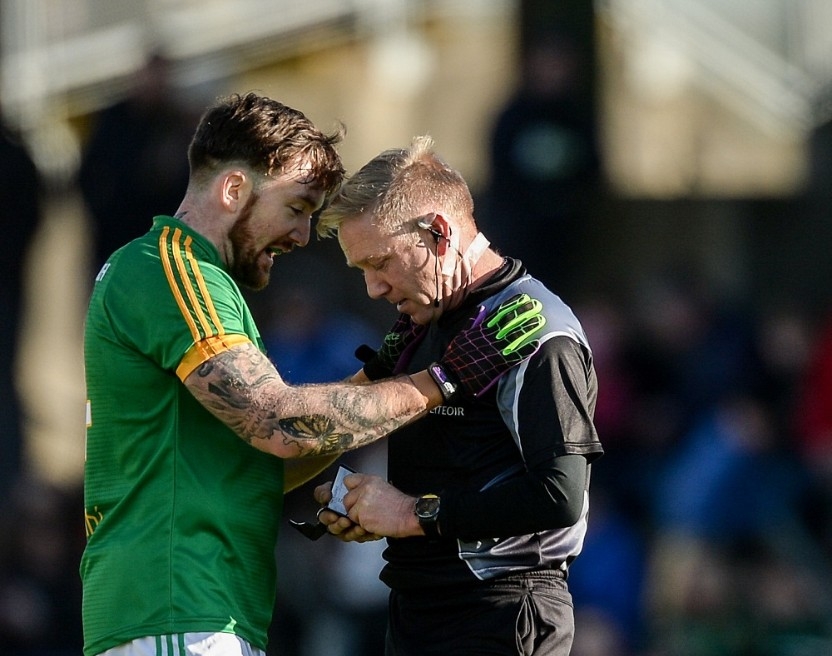 SS: Do you ever worry that you will regret them down the line?

“I don’t worry about that stuff. What will be will be. I don’t think what they’ll look like in years to come. I have ones on my hands and fingers, stuff like that.

“My idea was the get the whole right-hand side done. They’re all on my right: my right calf, my right thigh, my right arm, that was my mad idea.”

SS: Is that because, in the Bible, the left side is seen as sinister?

MB: “I would’ve heard the left side is always sinister; I’m not trying to make out I’m mad holy now. I do have faith but there’s a boxer called Mikkel Kessler, he would’ve fought Carl Froch. I would be a big boxing fan, I would’ve done a bit of boxing, and Kessler has his whole right-hand side done and I was like ‘Jesus, I like the look of that’.

“You’d be looking at different lads’ tattoos, and obviously you’d know Paul Galvin’s, the obvious ones like David Beckham, and I follow them all on Instagram and that. But yeah, I just thought half the body looks cooler; one side of the body more so than two sleeves, that’s just my own opinion.”

They’ll all be on display at Pairc Tailteann come 6pm on Saturday. Andy McEntee’s side flopped badly against Kildare in Leinster but you never have to look to far in sport to see there’s more than one way to the top.

As much as the season could be over by Saturday evening, there’s always the chance that burke and could get a lot more out of 2017 yet.

MB: “We wanted to get promotion in the league and we said that from the word go, and unfortunately we didn’t get that. We got it back together for the Louth game, the Kildare game was a bit of a disaster which you can’t sugar-coat because we didn’t perform.

“We got over Sligo, a typical qualifier, a war of attrition, wouldn’t have been beautiful football to watch now or anything. We’ve another home draw with Donegal, who wouldn’t have been happy with their performance against Longford, but they got through and that’s what we’re all after.

“We have them at home and I’m hoping we can have a right good crack at them. Navan will be a full, and if you scrape a win in that, and you don’t want to look too far ahead, in an ideal world you’d like to do a Tipperary on it from last year. Win games in the qualifiers and get to the very latter stages of the championship.

“It’s going to be interesting against Donegal and I can’t really wait for it. I get very nervous before games but it’s in Navan, we’ll have a full crowd, and I just hope we have a good cut.”