Aidan O’Mahony: “We’re judged on All-Irelands, not on winning semi-finals”

We had a dreadful start when we played Mayo in that famous All-Ireland semi-final replay in Limerick in 2014. We were 2-3 to 0-2 down after 25 minutes and, being honest, we were delighted we even got a second bite of the cherry.

Kieran Donaghy had come on in the drawn game at Croke Park, pulled down a high ball, and fed James O’Donoghue for a crucial goal. Once more, Star could be a difference-maker this time because Mayo might not have anyone who can stop him in the air. Ger Cafferkey has struggled on him before but I reckon Donie Vaughan might be the best of their big men, and won’t fear Kieran.

Cillian O’Connor and Aidan O’Shea clashed heads three years ago, while Shane Enright probably should’ve gone on a yellow and black card, but Lee Keegan had been cleared to play that second day after his red card.

That year, we were trying to bridge a five-year gap without All-Ireland success since we had beaten Cork in 2009. I’ve played in nine September finals and lost four of them, so I know the pain of losing.

You might think it’s ridiculous to suggest that Kerry’s burning desire could be more than Mayo’s, but there is no sympathy in the Kingdom when you lose.

If you’re down home on a Tuesday morning and Sam is sitting in some other county, it’s a rough place to be. In other counties, you might have people telling you how well you did, but for us it’s all about expectancy.

That’s why it could be a 60-year famine for someone like Mayo but still we feel the need that bit more. Paidi made that comment about the fans many years ago now but it’s a good thing to drive you on. You’re only ever as good as your last game, your last All-Ireland.

When I first came in, the likes of Seamus Moynihan and Darragh O Se set that sort of tone. So, there’s an animal coming in from the west and we’ll take nothing for granted. 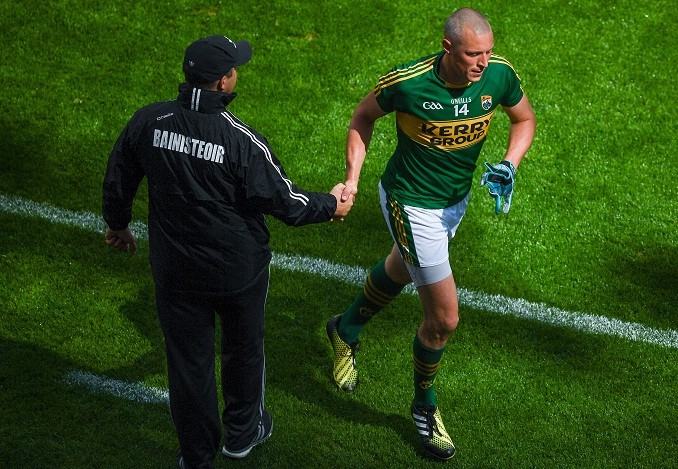 There are some similarities between Mayo this year and us in 2009, when we laboured past Longford, squeaked past Sligo and beat Antrim by five points. Then in the quarter-final we smashed Dublin, just as Mayo did in their replay win over Roscommon. There’s that feeling of building up to something, and certainly Kerry will be given a right rattle by Stephen Rochford’s men at Croke Park.

Without Keegan, the half-back line still looked fantastic and Kevin McLoughlin, Colm Boyle and Aidan O’Shea were exceptional. ‘The shackles are off, we’re sick of it’ was the message they sent out. Just like Waterford without Tadhg de Burca, they pushed on anyway.

O’Shea won three hop balls during the game, and even managed an unbelievable kick pass as he was being bundled to the ground at one point — YouTube stuff.

Mayo’s midfield was very dominant against the Rossies, and Keith Higgins was let off the leash once more to do what he does best. I think the full-back and full-forward lines will be key though.

Higgins and O’Donoghue will probably be a big match-up after what they treated us to in 2014. Andy Moran is still class and always finds a way to be available for the ball, while Cillian O’Connor is always going to be a scorer. We know what Paul Geaney can do too.

Mayo went the back door but, in some ways, they’re both untested teams — all four semi-finalists, in fact. The Connacht men have made it hard on themselves and lost to Galway — after going down to 14 men early on — and they have struggled to find form. But here they are again, against a big gun.

Their tackling is going to be an important part of this game. Donie Buckley was involved with us in Kerry and I have great time for him, and you can see his fingerprints all over what Mayo are doing. They’ll have a plan, and I’m sure whatever they did in the second half against Roscommon, it was with one eye on Kerry.

It’s going to be a game of ducks and drakes really. Chris Barrett, Boyle, Keegan, Paddy Durcan and Higgins can all drive forward, and they have great workhorses too in the likes of McLoughlin and Diarmuid O’Connor.

Aidan O’Shea will probably play centre-forward and he is in great form. People question him on the big day but we saw what he can do against Roscommon. There was a lot of Mickey Mouse stuff about him early in the year but he's a powerhouse, and I just hope he’ll be quiet for our sake.

Kerry have been building too and we knew that quarter-finals don’t tend to be won in swashbuckling style, but there was never any doubt against Galway. Mayo will push Eamonn Fitzmaurice’s men for 60-65 mins but I just think class will tell. So too will Kerry’s better bench.

Rochford’s crew have been burned all year and that will be hurting them, but the Kingdom’s need is greater. We’re judged on All-Irelands, not on winning semi-finals against Mayo.