“I’ve always felt a duty, that if county players like me moved away, it would be difficult for Currin to be competitive”

When he was working in Kinnegad during 2011-2012 Dick Clerkin and his wife Alison lived in Trim and he’s actually not joking when he reveals that someone buying their first-born a little Meath jersey proved his tipping point.That prompted their move home and they’re now living in Monaghan town, in the bosom of his native county.

Cailean and Darragh are both still pre-schoolers but they’re already kicking ball and he recently built them “their first wee set of goals in the garden.”Clerkin lived in Dublin, Belfast and Drogheda also over the years and was regularly approached to transfer and play his club football locally.It would certainly have lightened the load, especially when he was up and down to Monaghan so often for county training.

But he never moved club and, since calling it a day with Monaghan last November after 17 years and a record 179 appearances, the legendary Farney midfielder is delighted to be giving 100% to Currin GFC again as player-manager.

“It would have fell to me most years to find us a manager,” he explains. “We had mixed experiences and we’re also fundraising this year to build a new stand so I thought I could save the club a few bob on the training expenses by doing it for a start.”

His older brother Ben (38) is also still starring for the club where their father and grandfather also played.When Jeff Stelling and Chris Kamara landed to Eire Og, Smithboro to watch them play Currin on the third leg of ‘Jeff & Kammy’s Road to Croker’ they raised some glee by immediately christening them “the Mitchell brothers.”

But it wasn’t long before the visitors absorbed the Clerkins’ personal and family devotion to their club, and how this is the glue that holds the GAA together and fuels the inter-county game. 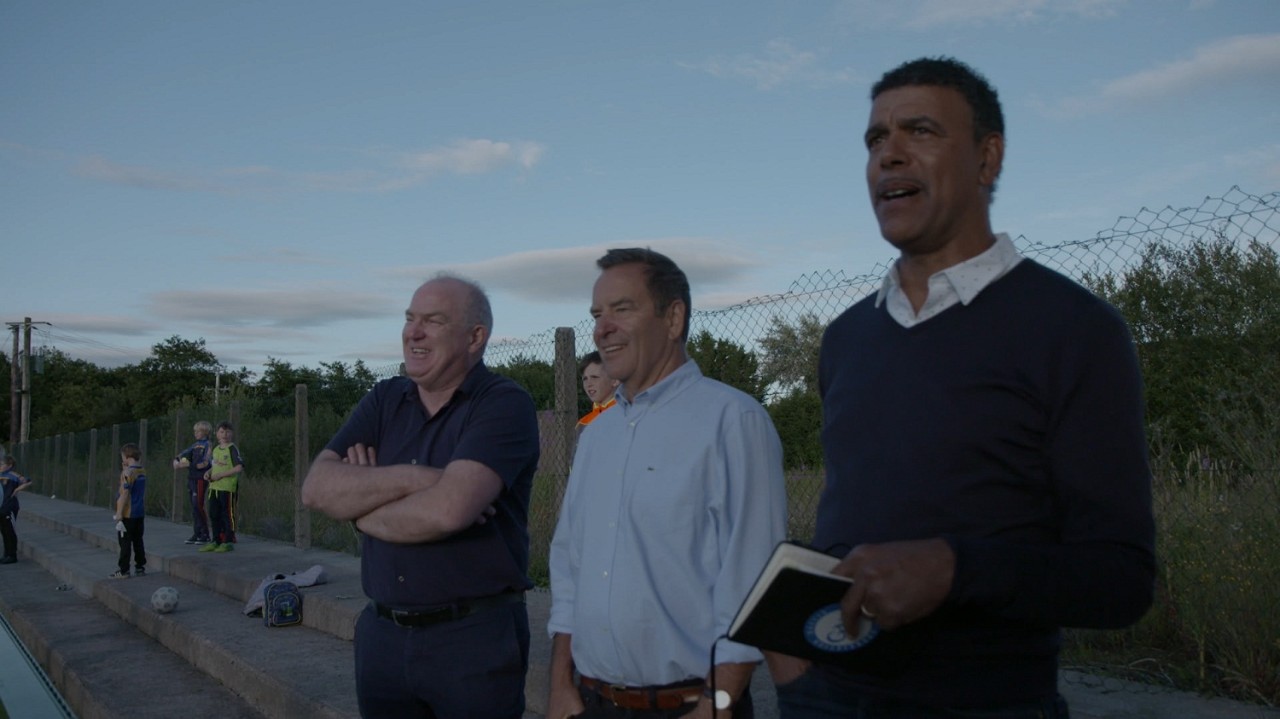 “Dick was player/manager, his brother was playing and we had Hugo (their father and former Monaghan star) watching his two sons play with his two grandsons alongside him, the next generation!” Stelling observes.

A late goal from Dick actually proved the winner and he quips: “I don’t get too many of them so it was nice to get it the night that was in it. I took a bit of slagging as it was a bit of a deflection but sure, you take them any way they come.”He jokes that his biggest worry that night was letting Hugo talk them through the local junior league game.

“To spend the match with my father on the sideline was an experience for them,” he chuckles.

“I was a wee bit nervous but, thankfully, he was very well measured. Those few bits at the end (where Hugo was shouting at the referee to blow it up), that’d be tame now compared to normal!

“It was the first adult game the lads had seen so it was all very new and novel for them but they really got into it as it went on. They started over on the far sideline but they moved across to join the players at the dug-out in the second half.

“It was actually a great game for them to see. It might only have been junior standard but the scoreline was 2-20 to 1-19 and a lot of the scores were from play.

“It was also a gorgeous evening so they couldn’t have got a better night or game to see. It’ll be interesting now to see what they think as they go up the ranks and see inter-county football and eventually the All-Ireland.”

The Clerkins aren’t the only family holding Currin together. There’s four McCaffrey brothers on their team right now and the Quigleys, McEntees and Smyths are three other families woven into the club’s fabric.There’s less than two years in age between Dick and Ben and he reveals his brother’s devotion has particularly affected his own loyalty.

“I’ve always felt a duty, that if county players like me moved away, it would be difficult for Currin to be competitive,” he says of the club which has provided himself, Jack McCarron and Stephen Smyth to Monaghan’s seniors in recent years.

“The likes of Currin wouldn’t survive if boys that were living away, and had easy options elsewhere, moved. 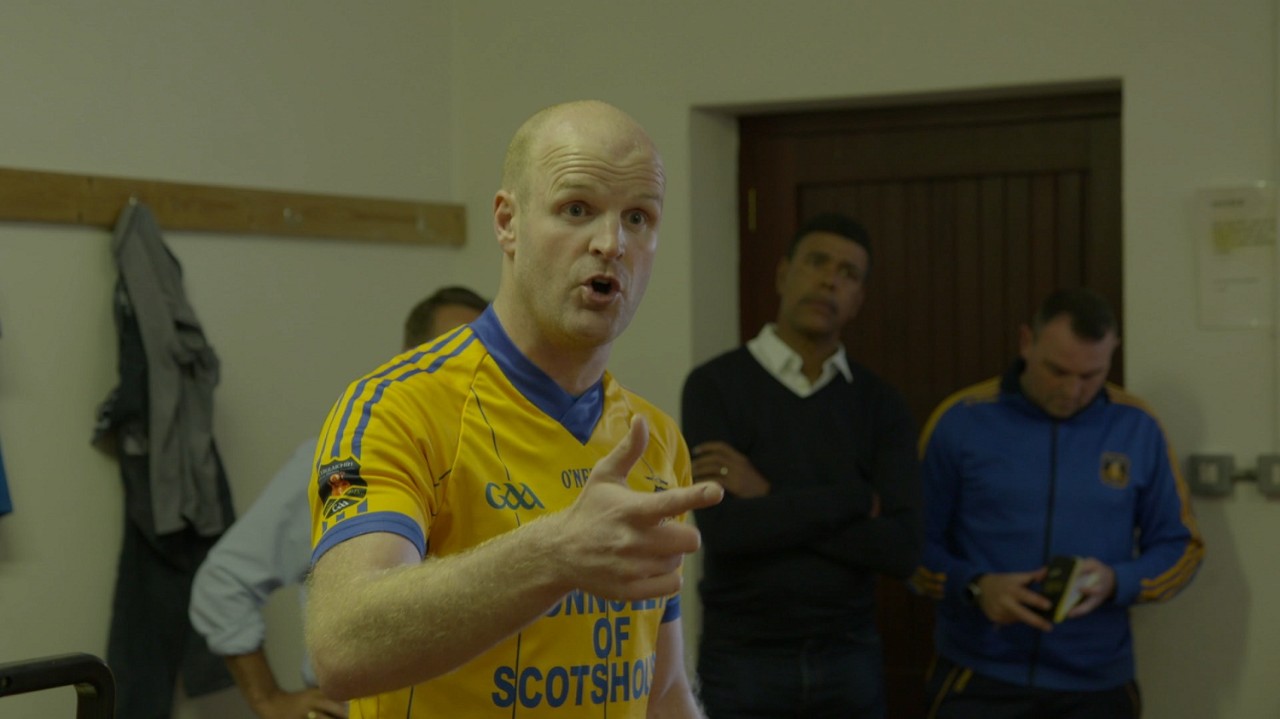 Jeff and Kammy may have made them a YouTube sensation but Currin’s good season has continued since their visit.They beat Clones in the county JFC quarter-finals and are awaiting confirmation of their semi-final opponents.

“We’ve bounced between intermediate and senior for the last five to six years,” Dick explains. “We just didn’t have the numbers to sustain it and are only back in junior this year but hopefully we’ll be in the mix by year’s end.

“The standard of club football in Monaghan is very strong,” he adds, borne out by their successes at every level of Ulster club football recently.

“There’s intermediate clubs in Monaghan that would probably be senior elsewhere. While that makes it ultra-competitive that also feeds and helps the county team.”

He was sorry to miss the post-match craic with Jeff & Kammy and the reason underlines the commitment level of inter-county players these days.

“The lads were looking for pints that night and they were already staying in Castleblaney so I rang Jason Hughes (ex-Monaghan senior) who has a pub there, the Spinning Wheel.

“I believe Jazza gave them a great night and was raging to miss it but we were going on our first family ‘summer holiday’ the next morning. Playing for Monaghan meant holidays were usually in September/October but we had booked a week in Clare. It was our first ever family holiday in July.”

First 5 episodes of Jeff and Kammy’s Journey to Croker are available to view here: