Maybe Mayo don’t have too many miles on the clock

A bank holiday is the time when the vast majority of the country is feeling sorry for itself. Broken and brow-beaten from the excesses of a long weekend, the Monday is for flaking out and eating ice cream.

This August bank holiday weekend, a creaking Mayo finally reawakened when few said they could. Roscommon were certainly off the pace but it takes excellence to turn a drawn game one week earlier into a 22-point win the next. It requires a complete shift; or, in Mayo’s case, a reversion to what they are.

They are a brute when they’re in this mood. Though Stephen Rochford would have been cursing his luck, the fact that Lee Keegan missed out through a foot infection — which is now okay — is a blessing in disguise.

It forced erstwhile inert stars to realise they could not just wait for the Footballer of the Year to deliver once more. Who could have foreseen the response? Thirteen scorers from play, the return of the vim and vigour that had been so markedly absent, and an end to talk of tiredness.

During the huge win itself, your columnist tweeted: “Where are all the folk talking about Mayo ‘miles on the clock’ today? No matter what happens next, they've shown great energy today.” It was a bugbear doubled down on by former Irish international Kevin Kilbane, a big Mayo man who said: “Nothing better than games in the legs.” With 537 league and 110 Ireland games behind him, he’d know. 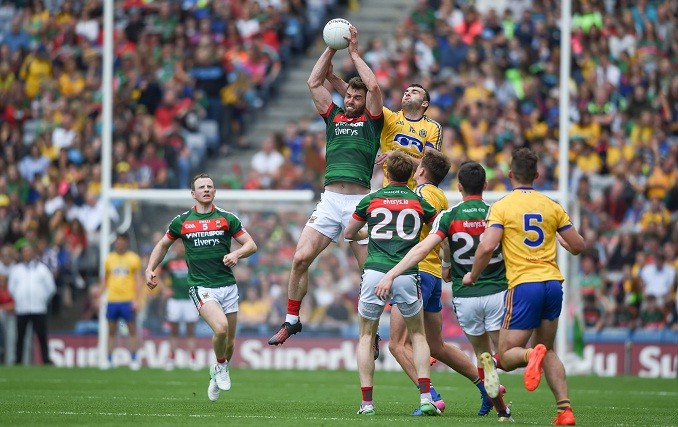 Keith Higgins was let off the leash and produced the most Keith Higginsish performance we’ve seen in some seasons. Rather than playing with defenders such as Ger Cafferkey whose instinct is to defend, Rochford put out a back-line who want to push on. They did, and each one of the starting defenders had a shot from open play.

Mayo looked deadened in the drawn game with Roscommon but, in the replay, they unleashed 44 shots (versus 24), and stopped the opposition even having a single effort inside the opening 16 minutes.

There’s still fire in Colm Boyle, and what summed up the fire in Aidan O’Shea was how involved he was in the physical changes: inside 27 minutes, he won four frees and gave away two.

The by-products of a great team performance are many. Number one, the bounce in training this week will be huge, particularly as so many players have seen game-time amid their 530-plus minutes of championship action (Kerry have played 210). Eamonn Fitzmaurice knows he has far more than just Keegan to worry about now.

In the past couple of seasons, Mayo have tended to sink or rise to the level presented by their opposition. Imagine being taken to extra time by a Derry team now relegated to Division 3, or a Cork outfit that was pulverised in the Munster final. It’s a trick. This same group has ousted the All-Ireland champions in 2011 (Cork), 2012 (Dublin), and 2013 (Donegal) under James Horan. They drew with the eventual champions Kerry (2014) and Dublin (2015, 2016) in the seasons since. The Kingdom, beware.

In a season where they have looked less impressive than any since Horan took over in late 2010, perhaps this is the year they get some luck and make good on it. We all remember Limerick in 2014, the All-Ireland semi-final replay where Cormac Reilly did them no favours, when Cillian O’Connor and Aidan O’Shea clashed heads to their cost, and when Shane Enright should’ve been sent off for yellow and black cards.

We remember Maurice Deegan wrongly black-carding Keegan at the end of the first half during the All-Ireland final replay of 2016. A man who was not only holding Diarmuid Connolly, but driving Mayo on and on and on. One retired referee, who wishes to remain anonymous, is adamant that Deegan got it wrong as the Dub was not pulled all the way to the ground by the Westport man.

Mayo are flawed, no doubt about it. Kieran Donaghy has sundered them on the edge of the square before, and no clear solution has been found in the meantime. Fitzmaurice will go after it, with Paul Geaney and James O’Donoghue providing perhaps even greater threats.

Mayo wouldn’t have gotten as close as they have if they didn’t have the quality. A last-second free cost them parity in the 2016 replay, but the combined effort of their players was good enough to get them into that position for a second time against the almighty Dubs. Surely they can’t simply be labelled ’not good enough’ over an errant free, one taken under the greatest pressure by a single man?

A final point to those who still feel Mayo’s best chance has come and gone. If you were to take the team that hammered Roscommon and drop Keegan back into the team in place of Chris Barrett (for example), the average age of the outfield players who willstart against Kerry is just 25.07 years of age. Still think they’re past it?