Pádraic Joyce gives his views on a bumper GAA weekend

The Championship weekend we've all been waiting for.Pádraic Joyce casts his eye over both games.

I am expecting fireworks between Dublin and Tyrone this Sunday. The game will be so intriguing firstly for the tactical battle and secondly for the physical battle. You wouldn’t be surprised if there are a few walking the line because it’s do-or-die now.

The two semi-finals are going to be hard to call, but this Tyrone team can play it any way you like. If you want to get stuck in, they’ll join you; but they can play great football too. There will be a lot of hurt there after losing the quarter-final to Mayo a year ago.

Stephen Cluxton is the launchpad once more and Tyrone have to push up on him at times, but it will probably be a case of picking the right moments because Mickey Harte will be happy to let them have some kickouts, invite the Dubs on, hope to dispossess them on their ‘45 yard line and break at pace. Dublin are such an experienced team, however, that this could be a gamble. We have seen the Dubs against Donegal few years ago kick huge long-range scores in that first half before succumbing to the counter-attack game.

That’s where the speed of Tiernan McCann, who has really come on skill-wise in the past two seasons, and Peter Harte can hurt Jim Gavin’s men.Funnily enough, when I saw the set-up they had against Monaghan in the quarter-final, I was half-thinking that Dublin are already planning for Tyrone or Kerry down the track.

Jack McCaffrey was at wing-forward, possibly with a view of tracking Tiernan McCann or Paul Murphy, while Cian O’Sullivan was named at full-back, and I wondered was that with Sean Cavanagh and Kieran Donaghy in mind. 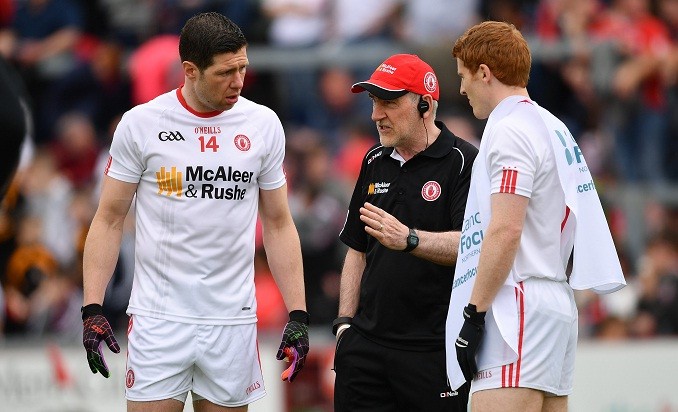 The capital are coming up against a Tyrone team that will want to do it for Mickey Harte and Sean Cavanagh, both of whom could be in their last season. Certainly, Cavanagh has confirmed he will retire when the campaign ends.

Harte is such a shrewd man, he’s won three All-Irelands and just think of the amount of players that have gone through his hands since taking over in 2003. Great players, some head cases, the odd difficult character, you name it he has seen them all and delivered.

Tyrone will go after some of the main men too. Con O’Callaghan has been brilliant this year but he will have a man in his togs the whole day. The Red Hand defender won’t mind if he never touches the ball. If you don’t score, he’ll be happy.

The pre-match debate will centre around whether Diarmuid Connolly will start or be kept in reserve. I’d start Connolly, no doubt. His 12-week suspension is over now but you have to think of it in terms of what he comes up against in training. Like Bernard Brogan didn’t feature much in the league, but then comes on against Kildare and hits 0-5. That comes from the intensity of A v B games, and I’d imagine Connolly will be ready for that same reason. He’s one of the best footballers in Ireland, after all.

People say that Tyrone don’t have marquee forwards inside but they have been averaging 21 points per game, and they’ll win if they get close to that on Sunday. It’s an unbelievably tight game to call, but I’ll just about go for the Dubs.

I remember coming out of Croke Park last weekend and a Dub said to me that “I wouldn’t be surprised if they missed that free on purpose”. Why? says I. “Because they will get another game before they play us in the final!”

A gas way to look at it.


Funny and all as that was, the Kingdom will come on an awful lot from their draw with Mayo. I predicted it would be level and again I’m finding it too close to call.

Stephen Rochford will stick with Aidan O’Shea at full-back, I’d imagine. It didn’t work as planned but I also don’t think it was a total disaster. Kerry footballers are smart, they pulled Aidan away from the square as much as possible which was the right thing to do.No high ball went in there, in fact O’Shea won the two high balls kicked in the first half, whereas if someone like Lee Keegan was there he wouldn’t have a hope in the skies.


Donaghy is about 9ft tall when he is jumping and those hands are up in the air. At the same time, I think O’Shea should’ve been moved out at some stage and maybe put Donie Vaughan back in for a period so Mayo could have benefitted from Aidan at midfield or even full-forward at times.

You’d have to credit Rochford for trying something all the same. Everyone remembers when they thought long and hard about David Brady at full-back for 2004 and 2006 final but, by the time he was brought in, those All-Ireland finals were already over. The manager is being proactive, and he is willing to try something as he knows that he needs a full-back.

So I expect O’Shea to stay at three but they need to have someone in there on the ground to help him. We saw that he let Donaghy off when he got out in front, allowing the Austin Stack’s man to turn and set up scores. That can’t happen again as he had a hand in 2-6 of Kerry’s total.

I’d have like to have seen O’Shea go into the full-forward line at some stage because Kerry are so vulnerable back there. I counted Jason Doherty getting 18 touches in the first half and so many of Cillian O’Connor’s and Andy Moran’s scores came through him.

Will Moran score 1-5 again this Saturday.? Unlikely. Will David Moran dominate midfield once more? It’s rare that the same thing happens in a replay.It’s a ludicrous game to call and I wouldn’t be shocked if we get extra time as we did in the 2014 clash in Limerick. 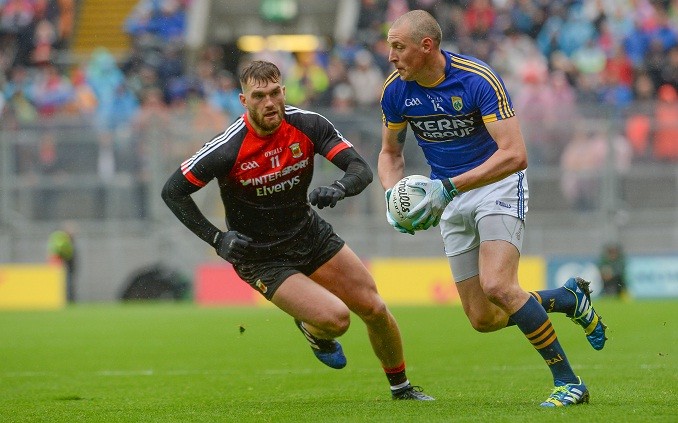 I’m not sure Mayo can make too many changes other than Paddy Durcan, but I do feel Lee Keegan will come on a lot. He missed the replay against Roscommon and, from my experience, that’s like missing three weeks’ training at this time of the year. I’d prefer to see him coming onto the ball rather than in the half-forward line. Colm Boyle should be staying on for longer too; I don’t care what a GPS tracker says because it doesn’t account for heart and what Boyle does to lift the crowd.


Jack Barry and Jonathan Lyne could come into the Kerry side to add some legs, and I’d have the pace of Darran O’Sullivan in for Mikey Geaney, with Stephen O’Brien on the other wing.


Mayo have an issue with getting the right men on the ball late on in games and I recall Cillian O’Connor feeding Stephen Coen for a shot late on. The Kerry defenders all expected Coen to get that ball and he did and he was blocked down, but O’Connor should’ve been selfish and worked a yard. I know if I had seen a corner-back running at me for a pass in the last 10 mins of a big game he would stay going empty handed -- a full forward’s job is to get those crucial scores at vital times.

Mayo need to devise a plan or a move when the game is tight and identify the two players who should only be allowed to shoot. This way the others won't shoot and will work the ball to the shooters, which could be the difference in getting them to the final.

Mayo also need to tighten up a little at the back. Another issue is their free-taking. They conceded eight kickable frees to Kerry and missed two vital ones in the first half themselves. As seen in the All- Ireland final replay last year, free-taking can be the difference in big championship games.


This weekend’s games are so hard to call but it will be a bumper weekend for the GAA and one the football championship badly needed. No matter what combination comes through to the final, it will make for a fascinating final either way.