A game of chess precedes each big championship clash. Manager A’s plans centre on getting his marquee man on the ball as often as possible to do damage, while also eliminating the main threat of the opposition. Manager B, too, is arranging his pawns and his more dangerous weapons for the same purposes.

Man-markings, or what the AFL calls ‘taggers’, are a huge part of the game now. Paul Flynn, Dublin’s half-forward, spoke this year of how difficult it can be to get into the game when you are somebody’s sole assignment.

In the drawn All-Ireland quarter-final, Lee Keegan was moved from his usual half-back slot to midfield because of the threat posed by Roscommon’s Enda Smith.

Stephen Rochford managed to flip the script on the opposition. The Westport man hit 1-3 in the first half by driving forward but, in a cross-check, Rossies manager Kevin McStay moved Smith to the inside forward line for the second half to combat the issue.

Mayo’s attacking weapon followed him and was decommissioned, with the green and red scoring just 0-4 after the break. On such cunning plans are games won, lost, or in this case, drawn.

Keegan is a pure footballer but he can mix it too, as we’ve seen in his tetchy battles with Diarmuid Connolly. So often, man-markers go out to upset their man, and in some cases even draw them into trouble with the referee.

“It’s definitely the most difficult part, I find, I’m not going to hide away from that fact,” says Monaghan’s Kieran Hughes. “When there’s somebody just sent out to stop you from touching the ball, what easier job can a man have than to track an individual around the field?

“Don’t get me wrong, there’s players who can do it very well but it depends on what part of the field you’re on. It’s nearly easier to mark somebody drifting around the middle because you can tag them all the time.

“But if there’s a ball played in where you can make a quick diagonal run for the ball, and somebody has the vision to see that, you can get away with it. Managers are out to win and they will do whatever to overcome the opposition.

“If they think they need to take someone out of the game, then so be it; it’s up to me or whoever to try to get the better of it.” 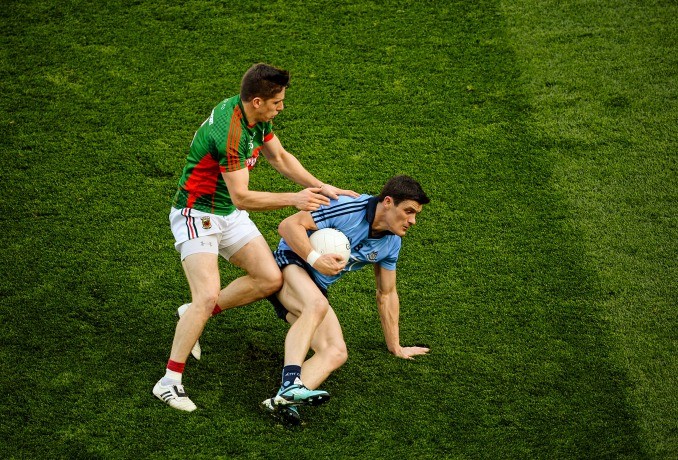 Was too much close attention from a tagger the reason why the Scotstown man ended up with a black card for a trip against Fermanagh in Ulster this year?

“That fella wasn’t marking me. He hit into me after the ball was gone a couple of seconds. That wasn’t really mentioned afterwards and 90% of people are going to blame me anyway, saying I shouldn't have reacted.

“That was one split-second where I said ‘here, I’m not having any of that, I’m not coming on the field to deal with that’. It was in my head then in the next game; the result was almost irrelevant, I wanted to stay on the field for 70 minutes to show my discipline is grand and you have nothing to worry about,” he smiles.

“I definitely do live on the edge, if I didn’t I wouldn’t be getting the best out of myself. That’s what I keep reiterating to people.”

For footballers such as Dublin’s Connolly, close attention is the norm. When there is the suggestion of a temper beneath the surface, certain markers will scratch as hard as they can to bring it out.

“In football now, if someone wants to sacrifice their game to stop you, it can be virtually impossible at times to have an impact,” says Tyrone’s Sean Cavanagh.

“It’s tough, particularly on the big day,” adds the Moy man, who was man-marked by Keegan last year and ultimately was sent off for two yellow cards. Indeed Cavanagh was the victim of pinching in the Ulster final against Down but ignored the provocation.

“You have to accept it sometimes and there’s always someone who is bigger and stronger or who will get the better of you some day. But it’s that thing where you feel you’re being hard-done by and that can be hard, you just have to bite your tongue at times.

“It’s easy to do that whenever you're winning games, but when it’s going away from you and you’re not getting into the game that’s where it becomes difficult. I’ve had it all, from people standing on my toes to people spitting on me, people late tackling me.

“To be honest, it’s probably not as bad nowadays. Whenever you didn’t have the rule whereby you couldn’t block people’s runs, that was difficult because there were times when you were really manhandled and you could do nothing about it.”

Justin McMahon famously ignored the play a couple of seasons ago and directed his undivided attention to Michael Murphy. The Donegal captain found it difficult to get into the game, and occasionally his great talents are peripheralised by the McMahons of this world. Such is life.

“It happened (to me) mainly in the Under-21s, this year against Tyrone,” says Jamie Brennan, who has often been tagged with Donegal underage. “He was just everywhere you go.

“The first game, there was no ball in and you were making movement but not getting ball. You were just kind of lost, asking what you’re doing wrong.

“The second game then, you just run them down, and then I got one half a sniff where he let his guard down and everything changed: I kicked three off him and he couldn’t stick me.

“That was it, just broke him once. Some players might not be as easy broke but if you can get away from them that one split-second when their guard is down, that can be the changing of the game.

“For Murph (Michael Murphy), it’s every single time he goes forward; it’d be sickening for him. Every game he’s getting battered around the place. Same for Ryan (McHugh), he’s getting off-the-ball touches.”

Paddy McBrearty, one of the most dangerous attackers in the country, doesn’t subscribe to the same solution as his team-mate for his position on the inside line: “No, you get the ball in and if you’re killed running and making runs, you’re worn out really. That’s what your man wants.

“It’s about making the right runs at the right times, beneficial ones. Knowing if your man marks from the front or behind, (because) they’re all different.”

In Jim McGuinness’ final game in charge of Donegal, the 2014 All-Ireland final, he faced as interesting ploy from Eamonn Fitzmaurice. Neil McGee was to shadow star-man James O’Donoghue, but the Legion man didn’t post himself near the square as expected. Instead, he took the defender for a wander, and it paid dividends for Paul Geaney who was able to expose a high-ball mismatch early on to goal from close range. O'Donoghue ended up Footballer of the Year thanks in part to his decoy play.

“There’s various ways,” says Cavanagh of combatting marking. “Knowing what I know now as a Gaelic footballer, I’m more used to expecting that sort of a player to come up against me.

“At times I used to get it when I played midfield in particular and it can be tough. Sometimes you have to accept it, sometimes it can be for the greater good of the team that you just take the man out of the road and leave a runway in the defence for someone to exploit hopefully.”

“I’d find it difficult if it wasn’t the norm, especially if you’re playing inside,” says Aidan O’Shea. “That’s how it is. Man-marking has changed because we don’t play out-and-out, one-on-one defending anymore.

“So when you say man-marking, you’ve got a man and somebody standing in front of you for the most part, which isn’t really man-marking. Whereas Paul Flynn is probably talking about someone tagging him from wing-forward which is a bit different where he’s roaming around the field and someone is tagging him.”

It can be all about patience. Sometimes you just have to accept that possessions will be scarce and there will be traffic to impede you. As Brennan says, it’s all about punishing any weakness you see, whether you’re outfield or close to goal.

“Ah it is (tough),” says McBrearty. “Man-markers might get the better of you some day in the championship and you’re probably thinking about him for the next couple of months saying I want to get back at him, league or championship.

“Especially if there’s ten or 11 bodies in front of you and there’s a man solely on you, it’s definitely difficult. Any ball you get as an inside forward, you have to make the most of it.”