Paddy Prendergast tells a lovely story of winning an All-Ireland with Mayo.What’s most striking, though, is the whimsical tone in which he orates his tale.One of two surviving members from the last Sam Maguire-lifting side from the county, along with Padraig Carney, his footballing tale actually started in Donegal.

It turns out that the two-time All-Ireland winner didn’t have inter-county football with Mayo in his plans at all, not until he received a letter in the post.

He was stationed in Donegal, enjoying life, but word of his talents found their way back home. “I just got a declaration form saying ‘please declare for Mayo’,” says Prendergast. “I had no intention and no desire to declare for Mayo when I was playing for Donegal, who I had been playing with for two or three years.

“I was born in Mayo but I ended up playing for Donegal because I was stationed there as a member of the Políní, the constabulary, and I was playing with Dungloe and jaysus we had some great matches against the likes of Gweedore.

“In actual fact,” he chuckles, “when we travelled to Gweedore in the championship, on that Sunday the priest who said mass in Gweedore had a football on the altar. I always said afterwards that he blessed three-quarters to them and a quarter to us!

“They were wonderful battles with them. So I was happy as Larry playing with Donegal, it’s a huge county and God knows at times travelling to matches was difficult because cars and roads were bad and so on. But a lovely people.”

So in 1948, that letter came and “very reluctantly”, Prendergast made a switch back to his native county where he knew Mick Flanagan and pretty much no one else. 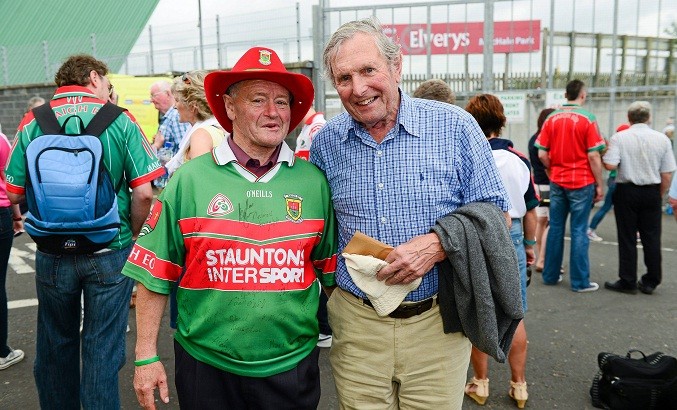 They could’ve won it all, but lost to Cavan by a point. “I’ll tell you something, the first year we had was 1948 and Jackie Carney and Gerald Courell were our trainers and we came from nowhere and went into the final and we should’ve won the All-Ireland that year.

“I remember there was a 14-yard free which Padraig Carney was taking, and it’s amazing I remember but when it hurts you, it doesn’t go away. Padraig never missed a free of any kind and he went up to kick it over the bar, and one of the Cavan players just up and blocked it, which was completely wrong.

“Peter Quinn was just punching the ball over the bar as the whistle went, and we were still a few minutes short of full-time. Why the referee wasn’t assassinated, I don’t know.
“He said afterwards that he thought it was a draw, and maybe he did when he cancelled our last point.
"That was our first effort, our introduction to senior football in county Mayo, for me anyway.”

They lost a semi-final to Meath the following year, and Prendergast feels that the playing of three forwards in the half-back line was costly. For 1950, Mayo made a move that would raise eyebrows even now — with the panel living together as they wound up for another All-Ireland tilt.

“Oh yes in Ballina. We lived together, we did of course, there was about 25 of us there. We were living with this wonderful woman and she had a three-storey establishment in Ballina.

“It was an extremely happy time and I didn’t know them beforehand, as I told you; I might have known Mick Flanagan and Eamonn Mongey. Suddenly, all these fine footballers were there, lovely people, and we had a great time as you can imagine.”

So you were full-time footballers?

“Oh absolutely. I was in Donegal at the time and arrived down in Ballina and spent my fortnight there and I think we had three sessions of that during the year. It was a wonderful time, over 20 fellas there living together.

“We weren’t permitted to stray,” he laughs. “There was no such thing as going off to dances or anything like that! We did a walk most morning of three or four miles, maybe twice as much actually.

“Then we’d have breakfast, rest for a while, chatting criticising each other and so forth, and then we’d go up to the park to train for an hour or that. Then, back for lunch, and then out at 3 o’clock and play for probably two hours. It was wonderful, and it was the first time I think it every happened in Gaelic games.

“We had to live and we had to get the odd five shilling to buy a bottle of lemonade or something! That’s about what it amounted to, actually, and we weren’t paid either during our employers!

“Would you believe we only went to one film during that period,” the legendary full-back adds with a smile. “The film was a world title fight between Joe Louis and I don’t know who he was facing. Anyway, that was the one night we got out of the place.

“We were dead happy. Don’t you know what a crowd of young people together would do?”
Mayo beat Louth in the 1950 final — a game refereed by Simon Deignan who had lined out in the final for Cavan in ’48 — and then Meath in 1951. From then till now, the All-Ireland famine runs on.

“Yeah it was (an amazing time). I think we had a great team, I don’t include myself in that, but we had great footballers.

“Padraig Carney, Eamon Mongey, Tom Langan and these, you know. We probably should’ve won at least four during that period because we were deprived of the first one with the game cut short and a gale behind us, with Peter Quinn point’s not allowed — and no re-taking of the penalty after a blatant foul. These things happen, you know.”

These days, Prendergast lives in Tralee so he gets extra attention from the locals any time a Mayo v Kerry championship game looms.

“The thing is, I’ve been here a long time and I’ve a lot of good friends in Kerry, going back to Paidi and all these, they’re fine fellas. Of course they produce the footballers, there’s no question about it. Gaelic football in Kerry is the king.”

One final thing: does he think Mayo can finally lift Sam Maguire after so long?

“Would you believe it, I don’t know. I really don’t know. Going back a few years when they were younger and stronger, I thought we should’ve won at least two All-Irelands.

“We played Dublin in one of them and our friend, the Dublin forward (Bernard Brogan), got two goals. Walked one in and he wasn’t marked.

“Quite frankly, my regret is for the lads who didn’t do it. These fellas who have trained so hard and stayed at it, a fine bunch of young men. It pains me to think about their losses.”