2017 Footballer of the Year contenders

So we come to the cream. These men have risen above the rest for their counties in the quest for Sam Maguire. Dublin may again be sitting atop the pile but it wasn’t just their stars shining throughout the summer. We take a look at our suggestions for the 2017 Footballer of the Year. Please let us know who you’d choose via social media or in the comments below.

The number one contender, and most likely winner. Such is the (unwanted) sympathy being sent in Mayo’s direction, inter-county players around the country are likely to vote en masse for the veteran inside forward. Not without good reason though, because the Ballaghaderreen man hit 3-24 from play in the championship, proving himself to be unmarkable at times. Kerry were taken for 2-6 across their clashes while Dublin managed to hold him to 0-3, albeit the number 15 also assisted Lee Keegan for that crucial goal. When the ball is sent it, in sticks to Moran who, at 33, belies his age with each stirring performance. What says it all is this: when he left the field after 63 minutes, Mayo were in position to be All-Ireland champions. His withdrawal deprived them of a match-winner.

Won two Mayo kickouts late on with the game in the melting pot, as well as scoring 0-2 in the second half. Just a consistent and crucial member of the team, whether that be at midfield or moving back to his natural habitat of wing-back. Named man of the match for the All-Ireland final, and rightly so. A machine.

The first man ever to lift the All-Ireland title four times as captain, the record holder of championship appearances, and the best goalkeeper of all time. Had some trouble with his first-half kickouts in the All-Ireland final but remedied the situation after the interval. Conceded just two goals in six championship games. Also showed huge coolness under massive pressure to participate in the keep-ball against Mayo in the dying moments of the championship.

Points against Derry, Clare, a goal and then two points in the games with Roscommon, followed by a crucial brace in the replay win over Kerry, and just another 0-2 in the final against Dublin. All the while, McLoughlin is keeping the scoreboard ticking over for Mayo. His dancing feet and class on the ball is of such huge value to the team, but it’s not always noted. An expected but highly deserving nominee here. 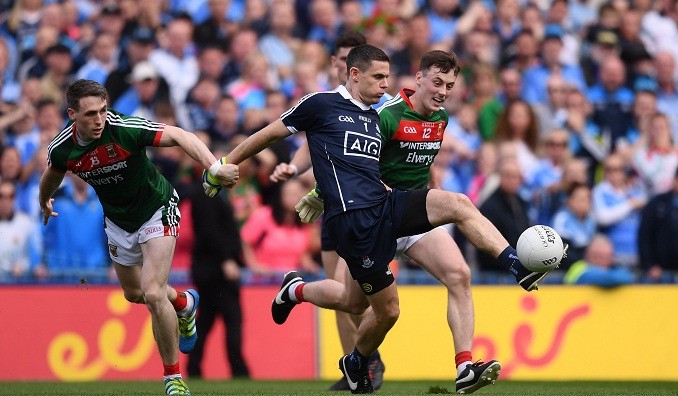 Where to start? Taking over the free-raking duties from Dean Rock in his first Leinster final start and scoring 0-12 (including six frees) is a good place. Early goals to rattle Tyrone and Mayo in the All-Ireland semi-final and final respectively is another. All on the back of winning the All-Ireland club hurling title with Cuala and leading the Dublin Under-21 footballers to glory too. O’Callaghan plays without fear, and his physical prowess gives him that extra second to finish with composure — as seen with his three-pointer against Mayo. A certainty for Young Footballer of the Year, the 21-year-old has won so much before truly needing to feel the sharp edge of a razor on his face — highlighting how many years he has ahead of him yet.