Jeff Stelling: “Gaelic Football is about a passion that’s felt by the whole nation”

The ‘Voice of the Gaa’ - Micheál O Muircheartaigh -was almost called out of retirement for Sunday’s nail-biting All-Ireland football climax after the final stage of Jeff & Kammy’s Journey to Croker nearly got derailed at the last minute.

The ‘Voice of the Gaa’ - Micheál O Muircheartaigh -was almost called out of retirement for Sunday’s nail-biting All-Ireland football climax after the final stage of Jeff & Kammy’s Journey to Croker nearly got derailed at the last minute.

An over-run on his television work in Britain meant that Chris Kamara had to make a frantic cross-channel dash to GAA HQ involving a plane and two motor-bike couriers and he only joined his commentating partner Jeff Stelling just 15 minutes before throw-in.

“Kammy was doing ‘Goals on Sunday’ which is usually off-air at 12 o’clock and I was watching and could see it didn’t finish until 12:28!” Stelling revealed.

“Somehow he still managed to join me at 3:15 but the one consolation I had was looking behind me and seeing Micheál there. I was thinking: ‘Hello! Bring on the substitution!’”
In commentary terms it would have been a substitution that matched those that Dublin used to win their three in-a-row but thankfully it wasn’t needed.

The most famous double-act in sport’s punditry capped off their whistle-stop immersion in the GAA by commentating on Sunday’s cliff-hanger between Dublin and Mayo and the final leg of Kammy’s journey was almost as dramatic as the unforgettable on-field action.

“I had a motorbike pick me up and take me to Luton airport and when we landed in Dublin I had another one ready to take me to Croke Park,” Kammy explained.

“It was a bit crazy, both drivers on the bikes were on a mission to get me there as quickly as possible and coming through the crowd to Croker on a motorbike was great.

“Just as we came to the stadium, a police bike came up beside us and flagged us down, but when I lifted my visor he went ‘oh crikey!’ He knew the score, but it was fine! I got into the stadium at 10 past three. It was another few minutes before I got to the gantry but I made it!” he laughed.

“I’ve never come that close before. I once went to the wrong ground for ‘Soccer Saturday’ but that was the producer’s fault,” he quipped.

Nothing they had experienced during their rapid GAA education - which took them from juvenile club to senior inter-county action, from Dingle to the Aran Islands, to the heart of Ulster football and back to Dublin - had prepared them for the cauldron that was Croke Park on All-Ireland final day.

“I’ve been to loads of matches in England and been to every single World Cup and Euros that England have been involved in since 2002 but the roar of the crowd beforehand was greater than any of those,” Kamara said.

“The only thing I could compare it to is the roar before the first race in Cheltenham. There’s a noise that goes up and it was exactly like that.”

Stelling, well tutored by O Muircheartaigh, arrived in Jones Road at 9am with his homework well done.

“Preparation is everything in commentary. Micheál’s preparation is immaculate and I’d got in front of me 70 things that I thought might be of interest during the game,” Jeff said, revealing that his notes, prophetically, had included a pointer on Dean Rock’s gifts as a free-taker.

“Kammy had prepared by watching the semi-finals and I had the help of Micheál’s daughter Doireann who was sitting next to me as a spotter which was a massive help.
“Once it starts you can’t help but be engrossed by it. As it was on a knife-edge right from the word go. The time absolutely flew,” he said. “When we got added time in the first half I was like ‘half-time already?’

“I knew how fast a game it is but what I wasn’t prepared for was the incredible, electric atmosphere and the sheer physicality of the All-Ireland final,” Jeff revealed.

“During commentary Kammy said ‘the referee needs 100 pairs of eyes here’ and they do because it was just going on everywhere, little niggles and clashes going on absolutely all over the pitch! But it was riveting and it couldn’t have been a more dramatic game.

“The game is right up there with the best as a spectator,” he said. “You feel part of a special event before it even starts because it’s such a special stadium and the fact that the fans are integrated, that there’s no segregation, is amazing.

“The great thing as an outsider is the speed of the game. There’s no time to celebrate when you score because the action’s back underway straight away.

“If somebody’s hurt there’s no rolling around because there’s no point, the game’s going to carry on without you. There is literally no pause for breath and that’s what makes the game as fast and furious as it is.

“Even though we had no allegiance to either side you can’t help but get wrapped up in it. By the end I was as gutted for Mayo as anybody else,” Stelling admitted.

The duo had a birds-eye view from the gantry of Cillian O’Connor’s heartbreaking free off the woodwork for Mayo and also of Rock’s ice-veined winner for the Dubs.

So what did they learn on their exciting and entertaining GAA odyssey?

“You realise that fitness levels are so high, that players that have full-time jobs are as committed as these players are and realise that the community is all involved,” Kamara said.

“I’ve massive admiration that they do it for nothing but it’s not a case of doing it for nothing,” he stressed. “They are doing it for what was themselves 18 or 20 years ago, because they know that money will filter down to the grassroots.

“Jeff asked Jonny Cooper would he like to be paid and he said ‘no, it would kill it’ and he’s right because it is unique this game and that is why it has lasted.”

“When we first started out we asked why don’t they shoot for goal more, why do they keep going for points all the time?” Kammy admitted. “But we saw top-class goalkeepers yesterday. The Dublin goalkeeper made a fantastic save and the Dub’s own goal yesterday (from Con O’Callaghan) - there was only one place he could have scored that and he did it.”

The players who caught their eye most were Cooper, whom they’d already met. “The Derminator”, (Diarmuid Connolly) when he came on and actually I thought the other Dublin substitute (Kevin McManamon) made an even bigger impact,” Stelling said, also singling out Mayo’s Kevin McLoughlin for his “darting runs”.

“You couldn’t help but think, when Dean Rock lined up that kick, ' this is either going to be the best or worst moment of his life,’” he said.

“That’s what being a sportsman is all about, being in that situation where you could win or lose the biggest game of the year.”

The absence of scoring celebrations also fascinated them.

“You can’t because the ball’s never dead really,” Stelling observed. “It’d be great if soccer was like that and you could just get on with it. I’d imagine the ball’s in play here, in percentage terms, much longer than in soccer because of the amount of time spent on throw-ins and re-starts which take forever. In Gaelic it’s ‘bang, get on with it.’

Asked to compare the GAA’s top players with those in British soccer he said: “They’re as fit as any professional sportsmen. They have to be, due to the sheer relentless pace of the game and also because of the size of the pitch. It’s immense.

“I’d imagine the players are as fit as any professional footballer and, bearing in mind that they’re amateurs, that is an achievement in itself.
“It’s hard to imagine how they do it with full-time jobs to hold down as well, I’m full of admiration for them really,” he added. 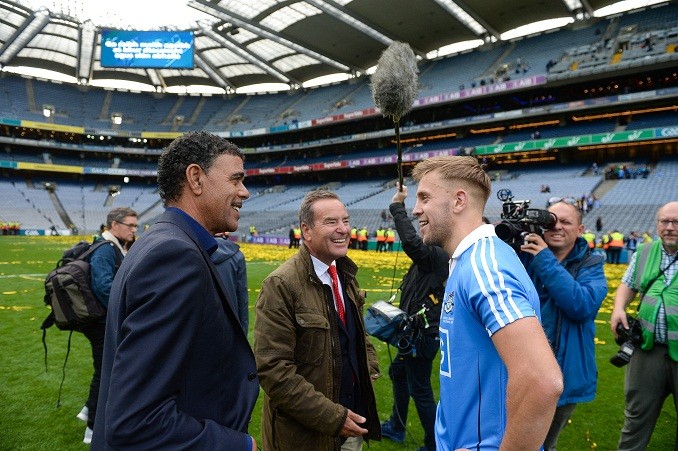 So with their eight-part GAA odyssey finally over,what memories will stay for them most?

“What I’ll take away is that Gaelic football is about a passion that’s felt by the whole nation,” Jeff said.
“It was amazing also to see fans of both sides sitting and laughing and crying together and drinking together before and afterwards. That’s a joy and really uplifting considering there's so much at stake.”

He said their visit to Inis Óirr, to meet members of CLG Oileáin Árann, was particularly special.
“You get there and it's basically just a rock and ‘you're thinking how can they play any sport here?’ And there's the one little green oasis in the middle - the football pitch.

“And on that football pitch there are kids from four years old up to 20year-olds. If the game is played there then it can be played anywhere,” he said.

"You'd love to take the community spirit back. When you see the fans all in together - elation and sadness sat next to each other, kids crying and the other half of the family up there, giving it all that, that's just incredible. You'd not find that in football (soccer),” he said.

“As soon as the final whistle goes in a Cup final, you look to the losing team's end and they've gone. They are not interested in watching what's going on. But the place was still three-quarters full when the celebrations were going on yesterday.”

Jeff and Kammy’s Journey to Croker may have ended for 2017 but, would they like to come back?

“Yes, definitely,” they enthused.
“We’re just waiting for the invitation…….. and this time for the hurling!” quipped Kammy.