WINSTON Churchill referred to depression as his “black dog”. If you’ve never experienced it, trying to make people understand its effects can be a hopeless task. Mikey Drennan is learning to live with depression, and speaks eloquently of its torture on his winding road from Kilkenny to Aston Villa FC to now facing into a Kilkenny county hurling final with James Stephens this weekend.

The ex-Ireland youth star spent four years with the Villains. During that time, he went on loan with Carlisle and Portsmouth at polar ends of England. After returning to Villa Park, he decided to move back to Ireland where he became top-scorer at Shamrock Rovers. All along the way, this apparent dream was clouded by turmoil.

Drennan was racked with homesickness when first he crossed the Irish sea aged 16, “crying nearly most nights, missing family and friends”. But gradually he made strides on the field and, by season three, had his name in lights in the NextGen Champions League. The ‘next Robbie Keane’ was the familiar description.

Then came the moment when it all changed, in the NextGen away to Ajax. Having already levelled the game at 1-1, Drennan whipped in a corner during the second half, which Samir Carruthers collected at the far side of the box and sent back in once more. Brad Lewis directed the ball to the net, 2-1 to Villa, but then disaster struck in the most innocuous manner. Drennan giddily trotted after Lewis, hopped up on his back, but came down awkwardly, breaking his foot (2:16 in the video below)

He’d be told it would heal naturally in three and a half months, but ultimately it needed surgery, and so the situation dragged on, and life pressures dragged him under.

“Everything was flying for me and I couldn’t really do anything wrong,” says Drennan: “I think it was 23 goals from August to January for club and country and I was flying it, I was hoping for a call-up to the first-team.

“Then I broke my f***ing foot and I was out for ten months when it could’ve been fixed, so everything was different then. When I got back, I still had the finishing touch but I never got back to the same sharpness and maybe agility that I had because I had been out for so long.

“When I got injured first, I used to just fly home without telling Villa or anyone. Go home on the Friday, I would just go home and drink, be with the lads, then fly back on the Monday morning.

He hid those ails as best he could, though his agent Graham Barrett — the ex-Ireland international, who had replaced Cyril Regis as his advisor — was one of those to reach out.

“It was before (the injury in 2013),” he explains of when the depression started. “I would be sitting in the room with blackout curtains, the four walls, just have the TV on and no lights or nothing, just in my boxers. Lads would be texting me to come outside and I’d keeping say no, ‘I’m not going out, I’m not going out’.”

If the devil makes work for idle hands, Drennan knows the pitfalls. Cash- and time-rich, he’d finish training not long after lunchtime and, just for something to do, he’d gamble. On his 18th birthday, he went to Four Oaks in Sutton Coldfield, and essentially threw his wages in over the counter at the bookie. 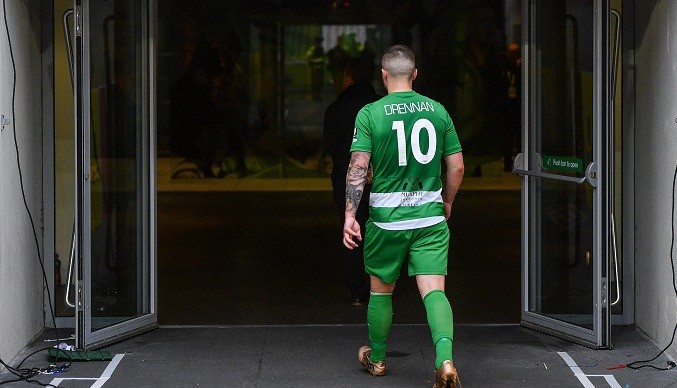 “You’d have the thrills of the highs and lows, but 80% of it was low. I remember at one stage, I got my monthly pay on the Friday, and that was when I was on good enough wages, that day I blew it all. I remember ringing my mother crying ‘what am I after doing?’.

“I wanted to go kill myself, you just have them thoughts in your head. ‘Why did I do that? That money could go to something important. It could go to my mother, paying off the mortgage, pay bills, to a charity.’

“So it was a case of ‘why am I doing this?’ I kept doing it (gambling) because I wanted to try to get my money back. I could've had 40 or 50 grand coming home with me (without gambling).”

Something had to change and it helped that Barrett, in a positive sense, was on his case. A move to Shamrocks Rovers was a step closer to being back in Kilkenny and the comforting bosom of home.

“He’d notice I was always down and crying and stuff. When I went back, he spoke to the doctor there back in Dublin, a well-known doctor. He started putting me on tablets and I started to feel better and more in a level place.

“Just being in Dublin was great and (Hoops player) Brandon Miele was great to me, all the lads were. But I was still an hour away from home and I couldn’t just go home, and that was a big killer for me.”

“Nothing was going right and any little thing… the main thing was the depression and the thoughts. I remember I had stuff written out on my phone for people, I wanted to commit suicide. All that stuff, I always had the thoughts and I remember trying to do them, but I never fully went to do them.”

What kept you from taking that step?

“People say ‘why did you do that?’ and stuff, but it’s that thing inside you you want it to go. You have no meaning; you don’t want to live your life for someone else. That’s the way it feels.

“Pat Fenlon said ‘you need to go home and sort your head out, your mental health is more important than anything else’. I went home and I just didn’t want to go back.

“I just wanted to go back to reality, get a job, be with my friends full-time, and go back hurling. Everything like that. The money didn’t matter anymore, I just wanted to be happy.”

You can sense in Drennan’s voice and words that he still has tough days, and he says as much. But he’s much better at dealing with it now, and says that the gambling is no longer an issue. The 23-year-old now works in a phone shop in Kilkenny and is delighted to have been given the opportunity. Dealing with people is a positive after all he’s come through.

In other ways, life has come full circle. As a youngster, Drennan spent half his year playing soccer and the other with a stick in his hand. In May, he was back with his first club, Evergreen, playing in an FAI junior cup final (losing 2-0 to Sheriff YC) and he’s since been part of the James Stephens en route to Sunday’s final against Dicksboro. 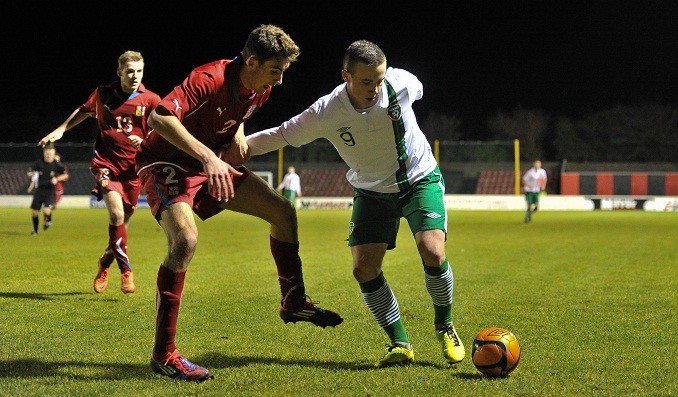 “It’s mad, like. I remember growing up seeing Jackie Tyrrell and Eoin Larkin being great hurlers for The Village. Even when I was in England, if I used to see them, I used to talk to them and ask how they were, and they’d ask me the same. Everyone knew everyone. The fact that we’re in the county final now just means everything.

“I’m still a little rusty. Still getting the touch back but I need a full year at it to get into the full swing of it. I’m not fully there, I need to do much better.”

Drennan, who scored a point against Ballyhale Shamrocks in the semi-final, says he was considered a better hurler than soccer player as a kid, and was even called up to the Kilkenny minor panel when just 15. Brian Cody is a fellow Village man, and it would be little surprise if the Cats boss saw medium-term potential in someone who has formerly played professionally.

“I had a few conversations with him last year; he was great to me. Any time I was back, I used to always go watch The Village and he’d ask me how I was getting on, even if I was at events or anything like that. He’d always saying ‘hello, how are you?’”

Drennan laughs at suggestions of a call-up” “I’d love to but I’m very far away from that, I need to concentrate on The Village senior team first.”

Enjoying life and sport again is the priority just now, not to mention embracing normality and “reality”. If the right offer came from a League of Ireland club, and mentally he is in the right place, he’ll certainly consider it. That’s another day’s work though.

“I’m in a much better place now. I’m around my family, friends, my girlfriend and all that stuff. It’s much, much better. Obviously you still have your moments and I don’t think depression will ever go away, so it’s how you deal with it, and I’ve been dealing with it better.”