Mount Leinster Rangers are a band of brothers. It’s a line so often trotted out about teams, emphasising their close bond. But when you delve deeper into the make-up of the 2013 Leinster club champions, it’s certainly borne out.

There are six sets of siblings on the panel, made up of the following surnames: Coady, Murphy, Grennan, Byrne, and two sets of Nolans.

Not only that, but there are ten players who are cousins. John, Paul, Edward and Richard Coady, Denis and Jack Murphy, David and Dean Grennan, along with Willie Hickey and Kevin McDonald.

All will be putting their shoulder to the wheel this Sunday against Naomh Eoin when Mount Leinster look to bridge the gap to 2013, when last they lifted the Carlow crown.

“They’re all kind of related, between being cousins and that,” says Tom Mullally, who managed them to that Leinster win, and the subsequent All-Ireland final in 2014. “It’s very family-oriented.”

Rangers were founded in 1987 with the amalgamation of three pre-existing club teams from the parish – Borris, Ballymurphy and Rathanna. They’re based in south Carlow beside the Kilkenny border, just three miles from Marble County club Blacks and Whites, while the Wexford border is just seven miles away.

Hurling is every bit as much a part of life for those in Rangers country as it is anywhere in the country.

“It’s made up of Borris, Ballymurphy and Rathanna, they’re the three focal points within the club. It’s a country club with a strong rural feel to it, and the GAA is the central part of everything that happens in the area.

“To be fair, there were plenty of leaders and there still is,” Mullally says of the side he managed. “You had the Hickeys, Frank Foley, Edward Coady who was playing with the county at the time. It wasn’t one or two leaders, there was a group of leaders and that’s what helped propel them along.” 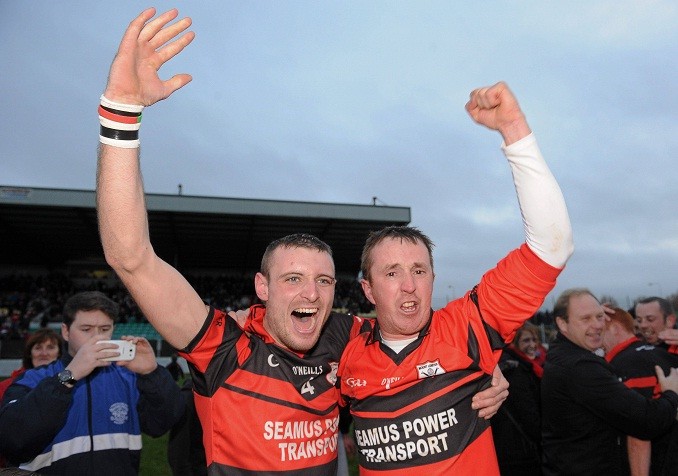 Kilkenny native Mullally is well-placed to explain whether Carlow clubs get the respect they deserve. Goalkeeper Frank Foley commented on this topic in the aftermath of the 2013 Leinster final win: “We make them sacrifices, the exact same as Kilkenny, anyone, Wexford, Cork — the exact same sacrifice, but we don’t get the respect we deserve.

Mullally doesn’t think people underestimate the Barrowsiders anymore. “I don’t think so but I would say that every county lives in its own bubble,” explains the Glenmore man. “Once you come out of winning your own county championship, then you’ve got to look further afield.

“When you look at Leinster, you’re probably looking at Kilkenny and Dublin and Wexford, you’re looking at the strongholds first to see what you’re up against. It’s never been disrespectful from what I’ve seen.

“Especially the people in Kilkenny, who have always recognised that Carlow have good hurlers. All that separates Kilkenny and Carlow is a kind of a ditch, so there’s no great difference in the people you see walking down the street. Obviously it’s not as simple as that but that’s essentially what it is.”

Mullally led the club to four county titles. In 2014, they were beaten on St Patrick’s Day in the AIB All-Ireland club final by an excellent and experienced Portumna side. They had hoped it would be Rangers’ greatest day, building upon an All-Ireland intermediate crown won in 2012.

It didn’t quite work out, but this band of brothers came close. In a small rural area, you need a close-knit bunch to go that far.

“Yeah, you do,” says Mullally. “It’s very easy to get it when you’re winning. To me, it really revealed itself when things aren’t going well. We’d lost county finals as well, and I think that’s where that strength and leadership came to the fore.

“It’s very easy when you lose to fall by the wayside and forget about the reason why you’re together and what brought you together, and the club is the reason. Mount Leinster Rangers, the players, the committee, they’re together. Win or lose, that still continues on Monday morning, but you have 60 minutes to show the value of that as well.

St Mullin’s beat MLR in the semi-final of 2014, which brought down the curtain on Mullally’s reign. Eamonn Scallan came in as manager but couldn’t dethrone the men in green. Under Brendan Fennelly, Mullin’s were bested in the semi-final this season, and Rangers are now favourites on Sunday.

“Brendan has plenty of experience, there’s nothing much he hasn’t done. He has been involved with plenty of clubs and I’d imagine he’s very good for younger players who are looking for that bit of guidance.

“I haven’t seen Naomh Eoin this year so it would be very difficult to predict,” Mullally says of the final. “Based on what I saw the last day, if Rangers can add another 10% to it then they’ll give themselves a good chance of getting across the line.

“There was good organisation, listening in from the stand you could hear them communicating well and it sets its own tempo. At the end of the day, there’s no point in either side going up not expecting to win.

“Rangers have to be going there with the mindset that you’re going to be crowned champions but it will take a phenomenal effort.”