Tommy Rooney: How we put Meath Hill on the Map

Tommy Rooney on winning a first Junior Championship Title in 37 years with his club, Meath Hill, how it came about and what it means..

“Meath Hill, where is that?”

“Do you know Monaghan? Aye. Cavan? I do. And Louth?

Sure. Well, Meath Hill is in Meath but it borders those three counties too.”

From secondary school, to DCU, to Off The Ball, you wouldn’t believe the amount of times I’ve answered that question - and it’s mostly from Meath people too.

We’re half a parish, we’re a church, a school and The Barracks. There’s a football field there too, and a fine one at that. It’s also home to the Meath Junior Football Champions of 2017. Our first since 1980. Our only title before that was in ‘42. How on earth did we just win our third?

For the Meath Hill footballers, our journey started in August 2016 when, for the second-year running, we had failed to get out of our group.

Sitting in that bottom dressing room in Pairc Tailteann we were told we’d never win anything, that we had no pride in our jersey - there weren’t many dissenting voices that evening.

It’s January 6th and we’re training, 17 fellas running around the back pitch of the club, but we’re on our own - the players had organised this session themselves.

“No luck getting a manager yet, lads”, was the word throughout January. After months of searching, we were still unwanted, maybe rightly so, but we knew we had something.

The league’s weeks away. Still no manager. We train on.

In those weeks, the players-group came to the fore. So many leaders emerged, we’re not kids anymore now. We matured on those nights. There would be no more throwing away half-time leads or losing to senior second-teams.

We get wind a manager may be interested, a man who’d won multiple championships before and one February evening he turns up to training. This was our first test of 2017.

We upped it that night, desperate to show what we were worth, as men and as a club - we convinced Davy Cahill to take a chance - “there weren’t many bellies, I knew I had something to work with.” - is what he’d tell us eight months later.

Now to the next test. We’re a young team. Two of our soldiers had called it a day in 2016. We manage to convince Barry and Keith, two leaders, both in their late (late!) 30s, to give it one more year.

“We need you lads. Come back. We’ll have a chance. Just one more year. I promise you, this is it.”

It pays off. Come October, Barry will play at centre-back with Keith Ginnity manning our midfield. In his 20 years of service up to this year, Barry Kierans had only one championship final appearance, Meath Hill’s last one back in 1996, which we lost by a goal to the other half of our parish.

Sliding doors, and all of that. 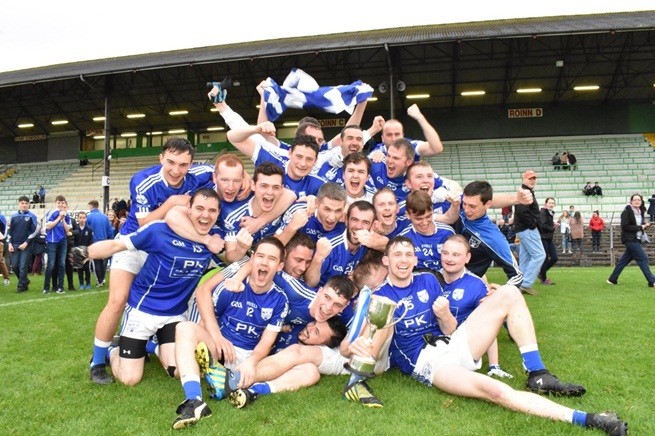 April hits us like a hurricane and we suffered a raft of injuries. Five weeks out from the championship; we’re a small squad and can’t cope. We’re the only Junior side in Division 2, it’s our second year there and that month was grim: an eight-point defeat, a fifteen-point defeat, a twenty two-point defeat, a nine-point defeat, and then we don’t field a team for the final league game before our championship starts.

But when championship comes, we stand up. We beat our parish rivals with a late burst.

There’s more in us and round two is much the same. There’s phone-calls, speeches and the WhatsApps. There’s a post-match huddle that stands out, challenging each other, demanding more.

In August, for the first time in three seasons, we get out of the group, onto the next challenge.

The quarter-final hoodoo, 16 years without a Meath Hill team making it to a semi-final.

We stumble through, 0-9 to 0-8; “dire” was how the Meath Chronicle put it the following Wednesday. But that was the moment we actually realised there was way more in us as a group - a belief crept into the squad and in some ways, the pressure was off.

Written off for the semi-final, we loved that. “Meath Hill will battle hard but Carnaross should win.” - I’ll never again underestimate a good chip on the shoulder, because I can tell you that line stuck. We’d win it by four and move on to the final...

So, why does Meath Hill mean what it means to me?

I was born in New York, schooled in Monaghan, I live in Dublin, my Mum’s from Roscommon and my Dad played his football in Cavan. Why have I committed so many hours and so much energy for this tiny pocket of half-a-parish that my house is only 20 yards inside?

It’s the platform it’s gave me. The fact that it’s always facilitated my obsession with Gaelic Football. It’s allowed me to form friendships and memories with guys fifteen years older, and seven years younger. It’s more than that too.

It afforded us all the opportunity to achieve something tangible for our home, for our pocket of the country. As a team, we wanted to make our club a better one and there was no magic wand, we had to dig in and get it done.

It’s very difficult to properly encapsulate, but the club is like a cult, and when the energy of thirty individuals is directed in the same direction, it can be a bloody powerful and marvellous thing.

The club means a different thing for everyone, but for me Meath Hill has been about this cause, our holy grail, our Sam Maguire. Always so far away, but forever in reach. I wanted to be a part of it more than anything.

It’s dark again, but it’s October now. We have people out watching training, asking what

the team will be. We’re a squad, battering each other out there, fifteen against fifteen, we know we’re flying.

Just days to go. We get sponsored gear that makes it feel like Christmas, like we really mattered. 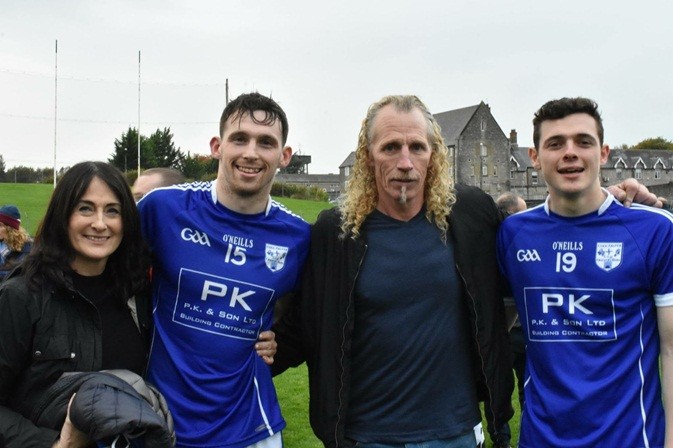 Friday night before the game we head away, an hour from home, avoiding the hype. There’s a meal put up for us, three teammates talk about ghosts of the past, being haunted by regrets; “after twenty years of trying boys, I can tell you that there is no next year.”

There’s a story around our parts about the 1979 championship final. Meath Hill led well but going in at half-time one of the players lifted the cup, in front of the stand. They’d go on to draw, and lose the replay.

That moment at the final whistle. Relief.

Then, hugging your friends like you’ll never hug them again, my younger brother Seán, a teammate. I’ll ever forget this. We’ve done something here. We’ll sing for days and smile for years.

Forty minutes of heaven, our heaven, as the grass of Pairc Tailteann turned blue, mobbed by family and friends and familiar faces - we had some crowd there that Sunday in Navan - we’re asked for autographs and photos, the same team that no one would manage back in January, we’d done it.

Onto the Monday morning, we’re in cars on our way to visit the schools, LMFM radio have called our selector David Crosby, the presenter starts laughing and says, “So David, a lot of people will be wondering, just where is Meath Hill?”