“Just so you know, the house is being used as collateral for the pitch”

Danny Cummins on his grandfather who won an All Ireland for Down. And why he takes goals before points.

Danny Cummins hadn’t far to look for inspiration, but the origin had travelled a winding road.

The Galway star’s grandfather Patsy O’Hagan, to put it mildly, was some man for one man. The latter was a star for the county Down, winning All-Ireland medals against Kerry in 1960 as a full-forward, and at wing-back when retaining the title at the expense of Offaly.

Not only was O’Hagan — who passed away in 2010 — part of the first team to bring the Sam Maguire Cup across the border, he was the first man to score a hat-trick in Wembley Stadium when the Mourne County played the Tribesmen in the 1959 Grounds Tournament Final.

The honours kept coming: Three League medals, five Railway Cups and seven Ulster Championships, including leading his team out as captain in 1966. O’Hagan was also a selector for the Down team which won the 1968 All-Ireland against the mighty Kerry. Just to top it all off, he was also on the first Irish side which took on Australia at International Rules in 1967.

But perhaps all of that pales into significance when Cummins explains what his grandfather did for Claregalway, who this Sunday face Michael Glavey’s of Roscommon in the AIB Connacht GAA IFC final.

“Patsy moved down to Tuam in Galway and he was a strong factor in starting the club in Claregalway,” says Cummins.

“The story I always remember is that in the 70s, when Claregalway didn't actually have a pitch, and instead they used some field in the parish for training. So my grandfather Patsy and one or two others were trying to raise money to get a pitch for the parish.

“And he ended up putting up their home house as collateral for a loan. So that was the story we were always told. My granny Kay came back home one day and he told her: 'just so you know, the house is being used as collateral for the pitch in Lakeview there'.

Cummins lets out a hearty laugh when you suggest that this is the height of madness.

“Yeah, now they both passed away there a few years ago, Patsy and Kay. But that's how it all began, so we get a lot of slagging out of it alright. But that's how he broke it to the wife alright, that the house is being used as collateral.

“It all worked out fine, thankfully everything got paid off and the pitches were sorted out. We have a brand new facility now which is very, very impressive; there's still a lot of fundraising to do but we have a growing population so we need it and it's fitting.” 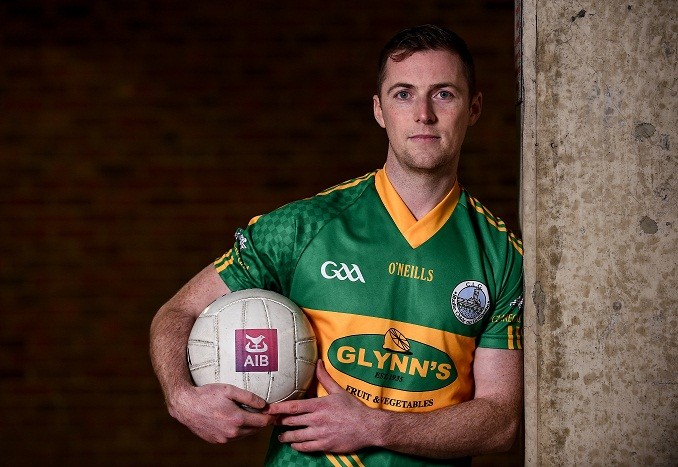 But what did people think of this guy from Down who put his house up as collateral for a local club in a different county where he was not blood-related to anyone?

“It sounds nuts even saying it to you again but that was Patsy and his love of the GAA,” smiles Cummins with a shrug. “The family were living in Claregalway and he was working in Tuam, and he could see what other clubs were doing. He really wanted to be involved in starting something good in Claregalway, and what possessed him to do that I'll never know.

“He passed away the morning of a league game with Galway (in 2010). We were playing in Tuam Stadium and Big Joe Kernan was over us at the time, and I learned of his passing that morning and I went on to tog for Galway that afternoon. That's a couple of years ago now. But it's funny now saying it back to you again because we don't talk about it too often.”

Cummins is an attacker with an eye for goal. He tends to play close to the square in the maroon shirt, but in a Claregalway jersey, he gets involved further out the field. They won the Galway final against Williamstown and their Connacht opener against St John’s within 24 hours of each other at the start of the month, but they’re well-rested now for the final against Michael Glavey’s, for whom his workmate Andy Glennon togs.

If a chance comes on Sunday, Cummins will be looking to stretch the net. At his grandfather’s funeral, one of the greats gave him a lesson that he’s never forgotten.

“The amount of people from that Down team (of the 60s) there at Patsy’s funeral was amazing,” Cummins recalls. “Sean O'Neill was there, and I remember a funny old conversation I had with Paddy Doherty at the funeral, and he was just chatting away and chatting away.

“He was asking about the football and of course the biggest advice young lads are ever given is to ‘take the points and the goals will come’. Well, Paddy grabbed me by the scruff of the neck and said, ‘if you ever get an opportunity for goal, go for the goal first and worry about the points after’.

“That's something that always stuck with me in the years since. When you're at the senior level you have to take your goals when you can and the points are your second option really.

“I just love the feeling of getting the goal and it does so much for your team as well,” smiles Cummins. “Any time we play poorly, you generally see no goals scored as well. You know yourself that it's a lifter for all teams. It's always good feeling to rattle it into the onion bag!”