If New York is the city that never sleeps, Chrissy McKaigue is the player who never seems to rest.

The dual star estimates that he’s been on the go for about five years now, such has been the journey with Slaughtneil and Derry in both codes.

In 2017 alone, the former AFL player lined out for his club in an All-Ireland club hurling semi-final, a club football final, scored 0-3 in a Nicky Rackard final win, and was a key man during the Oak Leafers campaign in the big ball.

His club have won the Derry double four years in a row now, having done likewise in Ulster in 2016 and 2017, while also winning the football in 2014 and losing a hurling final to Loughgiel in 2013. It’s the sort of journey you might get dizzy even thinking about. Juggling all those games in the notoriously tight club windows, and having the hunger to come back and do it again, says everything you need to know about these players.

“I find that it's tough but it's doable. Especially if you have the cooperation of different managers who are working together, which thankfully I've had. I haven't had any guys who have gone down the path of dictatorship.

"Mentally there are times in the season when it does get difficult. So I struggle with that, just the demands and the pressure of week in and week out.”

Surely, there must be times when players who put in as much mileage as McKaigue reach a point where they want to down tools — even just for a few days. He is the focal point of the club in both codes, a leading light with the county, and it must at times feel like a cross to bear.

“It’s very difficult to stress how difficult it is mentally,” he says, adding. “Over the past five years there’s been certain points of it. But, as I said, it's most difficult when you're going week in and week out. So there was a stage this year for example where we were going something like nine out of 10 weeks: hurling and football championship games each weekend.

“People say it's only a game a week, but it's such a big game every week that you've got to get up for it. Then you've got to come back down, and you've got to get back up again. That's the most challenging thing, to constantly do that, and then there's the weight of expectation.” 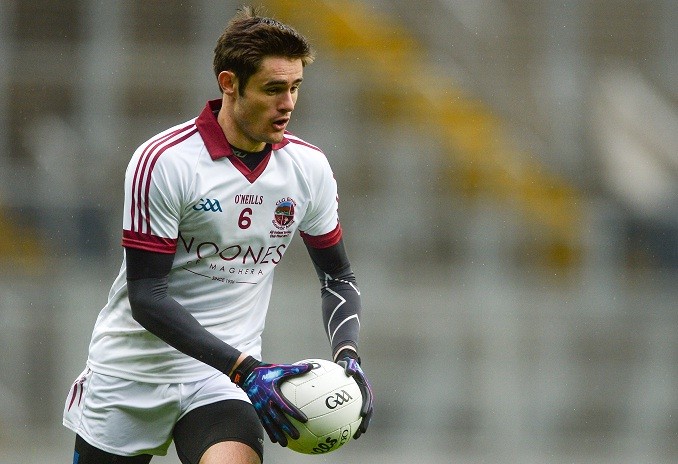 Because of the quality of people in the club — both on and off the field — McKaigue says that the load is shared very well. Responsibility and accountability are huge factors in everything Slaughtneil do.

The big games keep coming too. In February, they have Na Piarsaigh of Limerick in the All-Ireland club hurling semi-final, and then Nemo Rangers in the other code.

“We have so many strong characters, so there's always somebody in the middle of a game who can step up and take a bit of pressure off everybody else. So you get by and then sometimes it's good to have a sense of perspective in terms of how lucky we are.

“There's no doubt about it, at the minute, we have a special crop of players in all three codes in the club (hurling, football and camogie). The hurlers are probably a wee bit behind in terms of their development (compared with the footbllers).

“Our footballers have probably come through a few hard knocks, for example getting beaten by Corofin in the 2015 final, and being beaten by Dr Crokes in the All-Ireland. To be back in an Ulster final (beating Cavan Gaels) was some achievement.

“Those kinds of losses often paralyse and cripple teams, and it's a sign of our character and how we've come back and said 'hang on we can actually do this but we're going to have to put in the work'.

“Our respect and humidity for other teams, and how we go about our work should get the most plaudits out of everything. As a club, that's what we're about, and it all goes back to the quality of people you have on board.

"I keep on saying it, from the coaching side and playing side and an administrative side, we have so many quality people in our club. It's not by accident that success has happened.”