Daryl Flynn: Vincent's being dumped out made our ears prick up

When Rathnew dumped St Vincent’s out of Leinster, it sent shockwaves through the province.

No doubt, Daryl Flynn’s ears pricked up at the news, and this Sunday his Moorefield side are hoping to cash in after an AIB Leinster final clash with St Loman’s.

You have to go back 11 years since last Moorefield garlanded this cup in their colours, but it would take a brave man or woman to confidently call a winner this time around.

“When Vincent’s were knocked out, there were only four teams left at that stage, and it was a toss of a coin for any of them to win,” says Flynn. “Ourselves and Rathnew (in the semi-final) was a 50-50 game, then St Loman’s and Simonstown was the same. Sunday now, it’ll be the same, a marginal difference between the sides. There might be a point or two between the teams.”

It helps Moorefield’s cause that they don’t have a huge tranche of players in with the county panel, even though star forward Ronan ‘Roly’ Sweeney is a selector alongside Cian O’Neill. It’s meant that manager Ross Glavin has been able to mould and gel his team without county interruption, which 32-year-old Flynn says has been of great benefit.

“It’s great and I’m lucky I come from a good club,” says Flynn. “We have 30 lads training all year. Talking to some lads in Kildare, they might go back with their club and there could be 14 or 15 lads there, they’re struggling to make a team.

“At Moorefield, it’s a great club and we have a great underage system as well, but we’d have a lot of lads training throughout the year. There’s a great sense of community there and, with the run we’re getting on… we’ve great fans and you could really hear them in Portlaoise and Aughrim. I’m sure they’ll all have the buses ready to go down again to Portlaoise.

“We had a meeting with new management in December last year and we’ve been training ever since. It’s December again and we’re still training on Tuesdays and Thursday nights so there’s a good buzz in the club at the minute, and in the town as well." 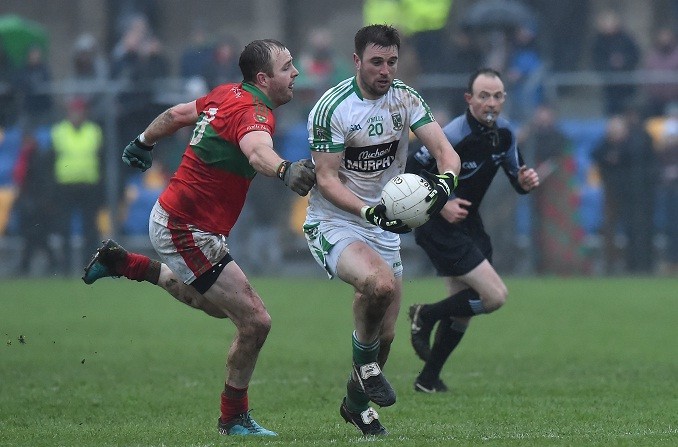 At this time of the year, flashy football tends to take a back seat and, as Flynn puts it, you have to “dog” through some games. That may well be the case again on Sunday at O’Moore Park, when Moorefield come up against their old boss, Luke Dempsey.

Flynn, who works as an electrician, is a mainstay of the Kildare champions and is one of several figures who have experience of the 2006 Leinster win.

Ross Glavin, Frank Hanniffy and Kevin O'Neill are now part of the management team while Flynn, David White, and Sweeney are still lining out.

The lattermost is one of Flynn's big influences, though the first name that comes to mind is a legend of Irish soccer.

“Probably the most famous one you’d look at is Roy Keane,” says Flynn. “Closer to home then, Ronan Sweeney I used to follow him playing for Kildare, Sos Dowling as well. You’d follow your clubmates in Kildare. I’d be good friends with Roly as well, I’d be up supporting him with Kildare and it was great to get to play with him for both the club and out there in Croke Park as well for Kildare. A great honour because he’s a legend up there in the club. He’s flying now as well. He’s selector with Kildare and playing with us.

“He was selector with Sligo and Waterford with Niall Carew. He’s done his apprenticeship. He’s been a big asset with Kildare this year and you can see how they’ve improved, and I’m sure they’re looking forward to giving Dublin a rattle again.

“He still has that touch of class. He’s been great all year and he’s great to have around training and in the dressing-room. For the young lads, when he talks they listen. He’s been playing well, started the last few games, and he’s a leader for us as well on and off the pitch.”

Against a Loman’s side containing the class of Paul Sharry and John Heslin, they’ll need every gun firing on Sunday.

“Look, it would mean a lot,” says Flynn. “It’s 11 years, a long time since we won, I was a lot younger then. You’re probably thinking you’ll get this every now and again, but that’s football for you. If you take your eye off the ball, you don’t back there as quick as you like. It’s been 11 long years so hopefully we’ll take our chance because it could be another 11 before you get back there.”