My wife said told me “you can’t just walk back in there” after missing so much of the year with Graigue-Ballycallan.

I’d been away managing the Kilkenny Under-21s on our journey and said at the start of the year that that’s where my energies had to be focused. Now and again, we had a little downtime, but family and the kids needed attention too.

So, at 39 years of age, 17 years after we last won a senior county title and 16 since we had made a decider, the idea of being part of a winning club team looked remote. I had spoken with manager Deccy Browne about my other commitments, and he was understanding of them.

For a start, the year hadn’t gone particularly well for us but a turning point came after we lost to Tullogher-Rosbercon. Chairman Dave O’Neill, a Limerick man who joined us about 20 years ago, came into the dressing-room and laid it on the line. He was superb, and it struck me that it was the first time the young lads really responded. In today’s world, there can be a take-it-or-leave it approach to play sport as a young person, but they took it on.

We have four or five county minor panellists and they would go on to fill key positions in 2017. That’s something we haven’t had in Graigue-Ballycallan for a long time. And down at intermediate level, which we slipped back to in recent years, we needed to inject some youth.

We ended up making the Kilkenny IHC county final, and it was a run that I put down to momentum. We went from a relegation semi against Freshford which we won, to the centre of a snowball that just started rolling. We won our next game against Thomastown, after being six points behind at the break, thanks to a burst of 2-12 in the last 25 minutes. I came on in the second half and got a couple of points, things just fell right for me in my first game back. But before I went in, I hadn’t trained all year, and I remember wondering if I’d be at the pitch of it at all. But concerns about being so rusty that I’d make a fool of myself were overruled by the instinct to just get stuck in.

To see the joy of people coming onto the field afterwards though, that really stuck with me. We’re talking about simply winning two games in a row at intermediate level, and the outpouring of joy is not something I’ve experienced down home since the early part of the millennium.

There had been huge fear there, as my wife had pointed out. I told her “I know” when she pointed out that I couldn’t just saunter back in. I’d done a couple of sessions but I’d been feeling it. One day, after doing almost no heavy work all year, I went into a 20-minute training match and was going full hog for the ball. You can’t hold yourself back, that’s human nature. I wasn’t right for days after it, the hamstrings were bawling out. I was thinking I don’t need this, especially when you’re managing the 21s. 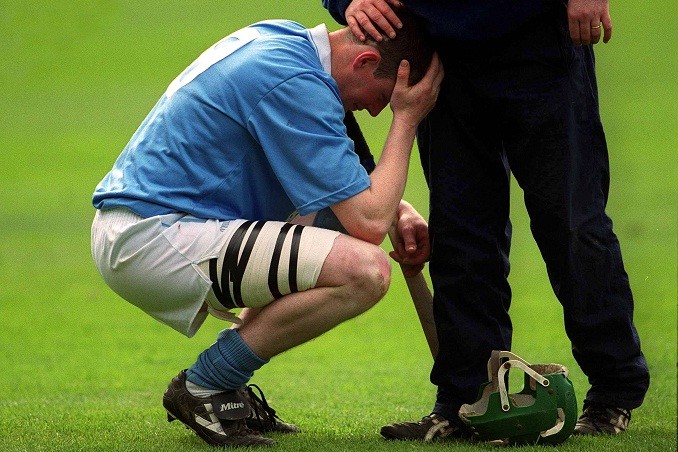 We stayed on a roll though. Tommy Walsh’s Tullaroan were drawn in the semi-final against Ballyraggett, with the latter winning. We went well behind Glenmore in the other semi, but came through after another second-half comeback. All our young lads were standing up, and the team was coming right.

The build-up to the final was terrific. I thought my days of being in finals at 39 years of age were over. You try to not get caught up in it and say it’s just another match, but you have to embrace it too. The tracksuits and all that come with it, the young lads need to enjoy that too. So we did.

Ballyraggett deserved to win the final, and what stands out to me was how physical they were on the day. We got back to within two points with 20 minutes to go, but their centre-back sat back, the midfielders dropped, and we just couldn’t get that ball to stick upfront. They’re a team that had been beaten in a few finals and I remember we turned over their goalkeeper to win a converted free in the first half, and I roared ‘your heads are gone again’. But they weren’t, and they came back at us hard. I was upended — fairly — at one stage and it was probably a reminder that I wasn’t in as good a shape as I might have been. But it also said that their hunger was huge, and they deserved to win.

I’m certainly not condoning what went on in Ballyraggett during their celebrations, and I want to be very clear on that. But what I found even worse was the betrayal by someone in the squad. The screenshot of the WhatsApp conversation that travelled all over Ireland came from someone inside the group, and you don’t do that to your teammates when a situation such as this has already blown up. It highlighted social media at its very worst.

For us, we were disappointed to lose the final, but it didn’t sting as badly as it might have because they were fully deserving of the cup. The fact that we made a final against the head meant it all happened before it ever even truly set in. The big thing is, it has to start hurting now. If the club is to learn from this and push on, lads need to look back on what was a good year and realise there’s far more to come. Hurt is required to push on.

Just a final point on a new appointment in Kilkenny club GAA: Henry Shefflin is now helping steer the management ship with Ballyhale Shamrocks. He has a tough job there because this is a club with massive expectation and a storied past, so there is always a pressure to deliver. There is also the added pressure of moving from being a teammate to being the man who calls the shots.

The great team they had is no longer at the same level and even some of the club stalwarts, lads like Bob Aylward who backboned the side when the county lads were away, are no longer as influential.

It will be an interesting challenge for Henry.