A two-time All-Ireland winner from the 90s is hoping a three-time champion from the noughties can help Fulham Irish to a shock win this weekend. Meanwhile, an Edinburgh-based side will host the Donegal champions, while elsewhere a manager comes up against his old charges.

It’s been a wild couple of years for Naomh Colmcille. In 2015, they made the Donegal IFC final and were just 60 minutes away from being promoted to senior football. Bundoran got the better of them that day, before the Newtowncunningham men had a very disappointing 2016. They were relegated from Division 3 of the All-County League, dropped to junior football, and lost a number of players for differing reasons. Ryan McKinley retired from playing duties but has since taken over as manager, with the side winning the Donegal JFC title before adding the Ulster gong after a 1-9 to 0-6 win over Fermanagh’s Belnaleck. A 40-strong group consisting of players, coaches and backroom personnel will head to Edinburgh from Thursday to Sunday for this All-Ireland quarter-final, with the club launching a massive fundraising push to offset expected costs of up to €20,000. Dunedin Connollys have a huge influence from Mayo: Brendan Parsons (Charlestown), Frank Molloy (Moy Davitts), Daniel Loftus (Ballintubber), Damien Keane (Westport), Seán Malee (Kiltimagh), and Conor Horan (Swinford). The Edinburgh side won their first British championship in 2009 but have just completed back-to-back wins after a 1-17 to 1-12 victory over Seán McDermotts of Birmingham. Last year, they made it to an All-Ireland semi-final but came up short to The Rock of Tyrone. Ryan McErlean and Matthew Crossan are among their goal threats fro Naomh Colmcille, who are expected to prevail.

Come 2:30 or so on Sunday afternoon, it will be the end of this fixture. It is to be the last All-Ireland SFC club quarter-final because London’s representatives will be facilitated in Connacht from next year on. Greg McCartan is in his second year as Fulham Irish boss and helped them claim their first London SFC since 2011 in dramatic fashion as they beat Tir Chonaill Gaels 0-15 to 1-11, with Owen Mulligan hitting a late winner. The manager, who won two All-Irelands as a player with Down, had an interesting meeting with his players at their training base in Wormwood Scrubs earlier this year. They all brought all the club jerseys of their native parishes to a session, which were laid out in a circle, to talk about what it all meant. There were 27 shirts in total. Those in the Corofin colours will be expected to raid the English capital without too much fuss. The Galway men needed extra-time twice during the Connacht championship to retain their title but they have a huge amount of firepower in their ranks. Among them are Michael Lundy, Gary Sice, Jason Leonard and Ian Burke, while Daithi Burke didn't even make the starting team for the win over Castlebar. It's hard to imagine anything other than a Corofin win. 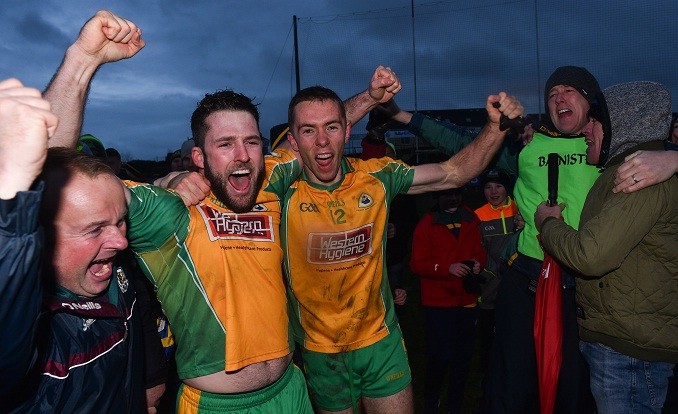 Luke Dempsey finds himself very much the topic of conversation ahead of this final. He has led St Loman's to a three-in-a-row in Westmeath, and that directly after back-to-back Kildare crowns with Sunday's opposition: Moorefield. It’s been 11 long years since Moorefield won this title, and they’ve retained a core of experience from that group — both on and off the field. Ross Glavin, Frank Hanniffy and Kevin O'Neill are now part of the management team while Daryl Flynn, David White and Ronan Sweeney are still lining out. Also in their ranks are Eanna and Cian (suspended) O'Connor, son of former Kerry boss Jack. Loman's are led by Paul Sharry and John Heslin in a game that should go down to the wire.