Colin Corkery: My third and final club All-Ireland was the sweetest

I won three All-Ireland club titles with Nemo Rangers, they were all special in different ways.
The first came in 1989 when I was only 17. The second, in 1994, as a starter. Lastly, and most precious of all, was the comeback title in 2003.

I’ll be watching on as a supporter when Nemo face Slaughtneil in the AIB All-Ireland SFC club semi-final this weekend, but I know what a special group they are. I was involved with them a couple of years ago when we won a county title, and they’re a great bunch of determined men. We were beaten in Munster by Clonmel Commercials, by that late Michael Quinlivan goal, and it’s a position we never should have been in. It was a painful loss, truth be told. Indeed it’s a measure of these men that they came back from such a blow to win Munster this season.

My first championship appearance for the club was back in that All-Ireland run of ’89, when Billy Morgan introduced me in a couple of the provincial games. I hadn’t featured in the county title win but it was brilliant to then be sitting in a dressing-room full of county stars and in a side led by Billy. Travelling up to Dublin, and all of that.

I think when we met Clann na nGael in the final, it was just my second time ever at Croke Park. I’d been there once before for a school game. The Roscommon side would end the day three-quarters of the way through a wretched run losing four finals in a row. There was a bit of pressure but that eased early in the second half once it was clear we had the cup in the bag. 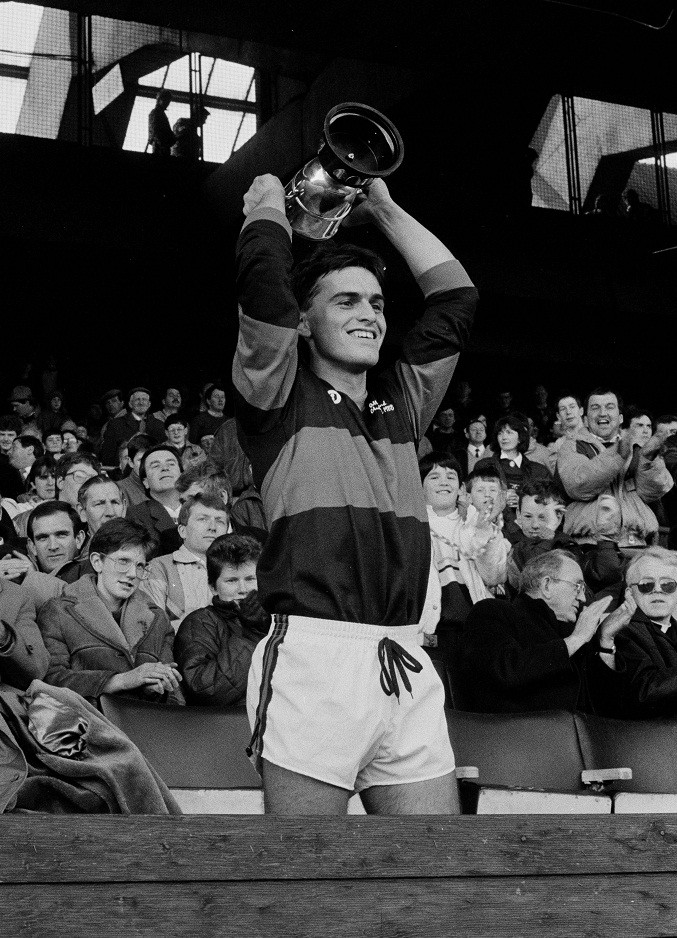 My memory of the full-time whistle was the big question over who would go up to lift the cup in the place of injured captain Ephie Fitzgerald. Eventually, it was Tony Nation who had the honour. There was great excitement for me to walk up the steps of the Hogan, which you’d have always dreamed of.

Fast-forward five years to 1994, against Castlebar Mitchels of Mayo, and my first memory was of John Maughan coming over to mark me, with his knee braced up. Maughan had been installed as Clare manager and we would go on to beat them with Cork in Munster that year, but we had to take care of this final first.

I had a good game on him and, being honest, it was comfortable enough for us from the start. It was a way different experience being a starter than as a sub in ’89. When you’ve got a jersey that’s numbered somewhere between one and 15, you feel like a bigger part of the thing.

With the cup all but assured, we could really take in the atmosphere and feeling during that second half. Dinny Allen was coaching us this time and there was a nice blend of youth and experience. I’d say it was as much relief as anything else to win it, because it’s a hard title to win. Perhaps the semi-final win over Errigal Ciarán was the big one, a very tough game. As with the current side against Slaughtneil, they’ll need to leave it all out on the field.

My final title came in 2003 across Crossmolina Deel Rovers. We’d lost to them two years previously, in a game that we should’ve won. This time we won, and perhaps should’ve lost. That’s just how it goes sometimes. I wouldn’t have paid much attention but the media did build it up as Colin Corkery v Ciaran McDonald, though of course there were many more moving parts to it than just that.
I was 32 at that stage, and I really did feel it was last-chance saloon. We were actually on the back of two final defeats in a row — thanks also to Ballinderry Shamrocks in 2002 — so the pressure was there.

But I just felt from the start of the season that we were not going to be beaten. It was an unreal group of players and their hunger was incredible. You could just feel it in the dressing-room and out on the field. A lot of it was to do with Billy too, who had come back on board as manager: he kept us going, and telling us we had to do it. It became an unwritten rule.

It was definitely my most enjoyable year as a Nemo player, and doubly so because I was captain. To win it after coming from behind was a great feeling too. I’m often asked about that score I got to put us ahead — though we added another afterwards — and it was a funny thing.

We got a ’45 out by the sideline and Billy comes over to me: “Put that over!”

So Maurice McCarthy had made a run, and checked. I jabbed it to him, he fed it back, and I leathered it from just outside the ’45. It was a Hail Mary, but the best Hail Mary I’ve ever hit.

The final whistle was just incredible because we had come back after losing two finals in a row. I’d retire maybe a year later after a serious knee injury so it was a great way to bow out on that stage. That 2003 final is definitely the one I cherish the most.

We’re only at the semi-final stage with this current team, and that’s what they need to keep in mind. There’s no room for getting ahead of ourselves, and I don’t imagine they will. Having the likes of Tomás Ó Sé in the dressing-room is a big boost, and from my days in the backroom team I recall the positive influence he had talking to the younger lads. We’ve always had great fellas joining the club, from Shea Fahy back in the day to Paddy Gumley from Cavan who has done so well in this team.

The backs have been brilliant but we’ll need Luke Connolly, Barry O’Driscoll, and Paul Kerrigan on form to see off the Derry champions. Slaughtneil have shown what a dangerous side they are by getting to last year’s final, and also making two club hurling semi-finals. To keep coming back as they have, that shows their steel.

The cliché is that semi-finals are for winning, and I’d add that you just don’t want to be left wondering. Don’t be negative, attack the game, and leave it all out there.