Darragh O’Connell: Speaking as Gaeilge on the GAA pitch

Darragh O'Connell is a rare breed of hurler. Born and bred in North Kerry where the small ball code is prevalent, he won a Christy Ring Cup with the Kingdom in 2011 and scored 1-9 in the final against Wicklow.

The following year he moved to Dublin to take up a teaching job in Greystones and made the arduous seven-hour round trips home to hurl with club and county for a few seasons.

He eventually threw in his lot with Cuala and Dublin, and hasn't looked back. Three county medals, two provincial crowns and an All-Ireland title have followed with Cuala.

They face Galway champions Liam Mellows in the All-Ireland club hurling semi-final on Saturday night. Win that and they're 60 minutes away from becoming the first side to retain the Tommy Moore Cup since Portumnain 2009.

Despite his success in the capital, O'Connell hasn't forgotten his roots. A teacher in GaelscoilnagCloch Liath, he picked up a love for the Irish language from his mother, who's also a teacher.

"Teaching is in the family,"he says."My sister and my mom are teachers too. When I looked at it, teaching was probably number one really.

"My mom is from West Kerry, a place called Minard in Lispole.I would have spent a lot of my time in West Kerry when I was growing up. That's where the Gaeilge came from and my love for the language.

"It was always spoken at home when we were young. I went to a gaelscoil in primary school, then a Gaelcholaiste inside in Tralee for secondary school. Irish would have been a big part of life at home."

It held certain advantages too. O'Connell and his team-mates would speakas Gaeilgeon the GAA pitch during school games.

"We would have always have done that in primary and secondary school. It was always a little bit of an advantage every now and then, especially when the bainisteoir was shouting something. You were hoping the fella you were marking didn't understand what he was saying."

Since he joined Cuala, he's been pleasantly surprised with the number of Irish speakers on the team.

"It's incredible. There are so many in the club thatspeakIrish. Even our own team, I would say upwards of 90% can speak Irish. It's funny, (local schools) Colaiste Eoin and Scoil Lorcain, they've all had a huge input into that.

"It kind of surprised me first when I moved up just how many spoke Irish and their love for the language. They're happy to use it and speak it which is great.

"There's plenty in Cuala who'd speak Irish, although we wouldn't really speak it in the dressing room." 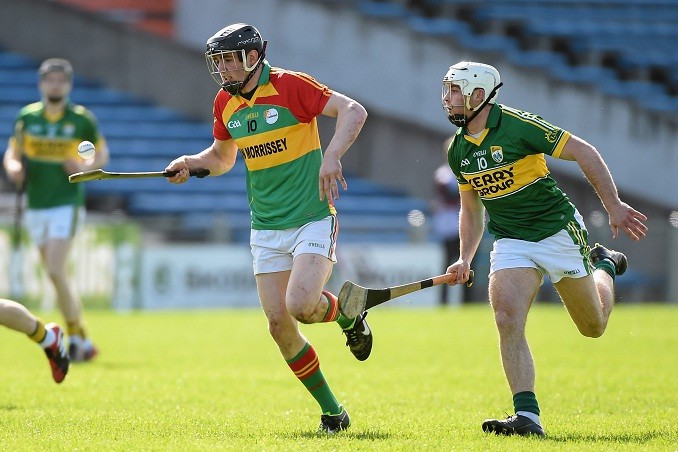 While hurling was always his number one sport, O'Connell was also a keen runner as a youngster until injury eventually forced him to stop.

"I was big into athletics growing up," he continues. "That's where it started really. I got involved in community games and athletics clubs. I was running 400m or 200m when I was a little bit younger.

"I came to 15 or 16 and picked up a lot of injuries at the time. I was probably two years when I didn't really play or run or anything.I think I was 14 when I last ran competitively.

"When I went back to athletics, two years out at that age is a real big developmental stage where a lot of changes obviously occur. When I went back then I probably lot that little yard of pace.

"I went in training with an athletics coach called Gerry Horgan in Kerry and we went back to the basics again. That's where my interest in that side of sports performance came as well."

His deep interest in athletics and the human body saw him enrol for a part-time Strength and Conditioning course in Setanta College in 2014. Ultimately, it was one of the main reasons he decided to transfer to the south Dublin club.

"I've carried it on and I just finished the bachelor of science degree at the end of February. I've been at that for the last four and a half years, so it's been enjoyable. You could do it in your own time and you learn a lot from it that you can apply to your own game.

"There were lots of different modules. One area I was very interested in was child development. It's about the changes that occur in a child as they grow and how to tryand unlock their potential and athletic ability.

"At the moment it's so difficult with social media, computers and Playstations or whatever it is. Those basic fundamental skills are lacking in a lot of kids. It's something that from my teaching background I'd be very interested in.

"For me, I'd love for every kid to get involved in athletics when they were six or seven because it teaches the basics of movement. Then you can build on that with skills as it goes along. If you take any of the best athletes in the world, none of themreally specialised in one area when they were younger, or the vast majority of them anyway.

"There's always a crossover between different sports because you pick up so many different things. From that sense, athletics does teach you the basics and then you can build on that."