Aaron Kernan has got himself embroiled in some heated debates about which Crossmaglen team was the best.

The first crew won All-Ireland titles in 1997, 1999 and 2000, while the ex-Armagh defender’s brigade completed their own hat-trick in 2007, 2011 and 2012. Given that both sets of players achieved highly, it’s not surprising that an air of competition pervades.

Kernan knows it’s a zero-sum game, but that doesn’t stop the chatter.

“There would be conversations or heated debates about who was better,” Kernan smiles, at the AIB GAA Provincial Club Player Awards.

“Just the way it worked it was three with the first group and three with the second group, and I think we were better. In fairness we had one common denominator for the whole lot, which was Oisin McConville, and I'm not sure how much either team would have won without him.

“Everyone takes great pride in being involved regardless of whether it was the first time or the last, and of the huge 20-odd years for the club. It inspires the next generation and gives everybody something to aim for.

“That's the most important thing, to give young people something to aspire to. And I think one of the biggest things that the GAA did was bringing the three tiers in the club championship, as everyone has a chance of getting away to Croke Park.

So too is the feeling upon the final whistle, with the 2005 Young Footballer of the Year reminiscing on the 20 minutes to half hour in the changing room after such wins. Kernan has won 14 county titles and eight Ulsters, but everyone is on “a different level” after these big days in the sun.

Which begs the following question: which was better, his first All-Ireland in 2007, or becoming a back-to-back champion in 2011-12?

“I think the back-to-back was better,” says Kernan. “It's a burden that’s hanging over you because everyone else talks about it, while you try to not talk about it. Deep down, though, you know you have to do this.

"Garrycastle really should have beaten the first day out (in 2012) when we scraped the draw, and we played exhibition draw in the replay, but it very nearly didn't happen.

“I wouldn't say we were complacent, it was just the fact that it was two-in-a-row, and we thought a wee bit more about it rather than just playing. To do back-to-back for that group was particularly special because we had done it before in 1999 and 2000 in the club, so it felt like we were then on par with that team.

“Prior to me playing senior football we won three All-Irelands, including a back-to-back, and then we went on to do the same, so it was pleasing from that aspect.” 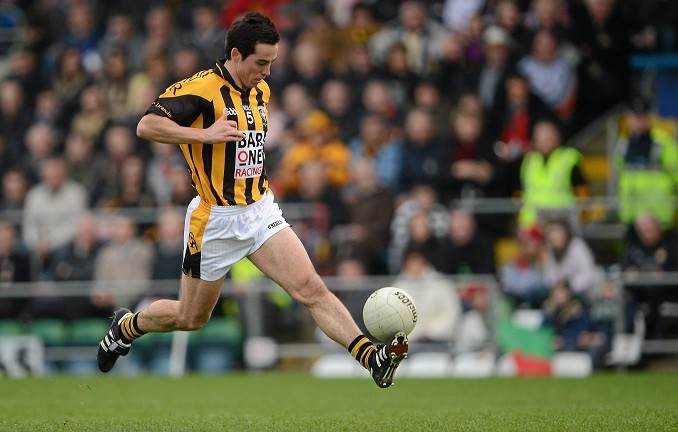 Kernan is a massive fan of the club awards, saying “I've got a lot out of it and I just think that it's overdue, and it's brilliant that club players will now feel the sort of recognition as you get with inter-county. It's massive and a great initiative by AIB.”

One of the zanier events in GAA history happened in September 2014 when Crossmaglen took on Dromintee in the Armagh championship. It was a game that almost didn’t go ahead and, in many ways, all involved wished it hadn’t.

One of the Dromintee players got married on the day of the game, and ten other members of the squad were attending the wedding. They had asked for the game to be re-fixed but their calls weren’t heeded and, as a result, veteran club members took to the field.

Kernan explains his weirdest day of championship football, of seeing old men in jeans and ill-suited foot-wear at the Athletic Grounds. The veteran side lined out simply to fulfil the fixture, and ensure their club would not be hit with a ban.

“When we're in championship football, I’m up for it, regardless of anything around it,” says Kernan.

“That was a quarter-final and there were rumours that they were unhappy that the game was going ahead, but never in my wildest dreams did I think that this was going to happen.

“Basically we went and warmed up as normal on that Friday night, and what really annoyed us was that because that was a Friday and we had guys working in Dublin and Belfast and Portlaoise, everywhere, they were taking half days to come home from work to get prepared.

“We went and warmed up away from the ground because there's only one pitch there in the Athletic Grounds in Armagh. So we went up to another club ground and when we arrived, there were murmurs and you could hear the officials talking in the changing rooms, and we were just trying to remain focused until we got out.

“Then we get out onto the field and we saw them: it was 15 men just in jeans and they had club jerseys on. I ended up walking over beside a man who was probably 60 years of age and he just said to me 'I don't want to be here'.

Was that your craziest day playing football?

“Oh absolutely, yeah,” says the 34-year-old. “What actually happened is that they threw up the football, we went straight up the field and scored a goal, and then hit a couple of points? Just enough to make sure that they couldn't beat us.

“So what happened then is that they were around kicking the ball and we just went off and had a training session. You weren't allowed off the field so the 15 players had to stay on the field for the duration of the game.

“So we just did shuttle runs for 60 minutes, so it wasn't great. Those Dromintee people didn't want to be there either, and hopefully ours never have to encounter it again. It was a disappointing afternoon.”