They had come back from ten points down to beat Meath in the 2008 provincial quarters at Dr Cullen Park, but then 2003 winners Laois lay in waiting.

Forde began the semi-final at Croke Park by kicking six wides in a row from play, before finishing the game with 0-6 as they won 0-18 to 0-12. All of which meant a first Leinster final since 1956.

“We had lost something like five Leinster semi-finals in a row, and you’d be thinking we should nearly throw in the towel if another one slipped by us. “But we had come into the game unbeaten all year, we had won Division 3, and had come back to beat Meath.”

Forde, who will watch the Models take on the O’Moore County this Saturday at Wexford Park, in a first meeting in Leinster for a decade, chuckles when reminded of his errant shooting.

“Yeah, the six wides! I saw someone wrote in an article afterwards that there was a bit of a breeze in Croke Park that day, but there definitely wasn’t enough of a one to be hitting that many shots wide. I took a couple of bad decisions at times, but I still had the confidence to know they would start going over eventually.

“We went in ahead at half-time that day and we knew the scores would come.” Much has changed in the Wexford GAA landscape since that glorious season in 2008. Though Dublin swatted them aside in the Leinster final, Jason Ryan’s side recovered to make an All-Ireland semi-final — which they lost narrowly to eventual champions Tyrone.

A decade on, the wheels seem to have fallen off. They won just one of six games during the spring and will be a Division 4 side in 2019 — with Laois swapping places on the league ladder. Forde retired from the side in 2011, though he was a forwards coach in 2015 and 2016, PJ Banville called time on his career at the end of last season, while Ciaran Lyng is the one possible survivor from 2008.

The 32-year-old is yet to feature competitively in 2018, with Forde unsure if the classy left-footer will line out this year under new boss Paul McLoughlin. “It looks like Ciaran might be gone,” says Forde. “I’m not 100% certain and there’s been nothing official, but he didn’t feature during the league. I spoke to him earlier this year and he wasn’t sure what he was doing, but maybe he will be involved.” 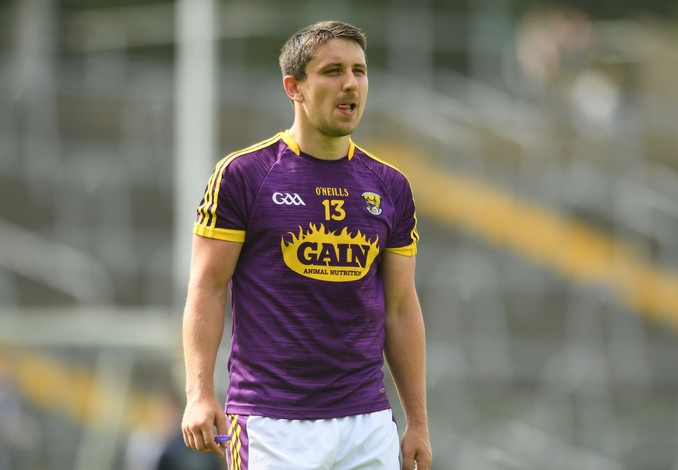 “There’s lots of factors,” Forde says of Wexford falling down the pecking order.

“The clubs in Wexford are not particularly strong at the moment, and you need that thriving to feed into the county scene. There’s no doubt that hurling has taken away from football too. Simon Donohue and a few other lads would be great additions but you can’t blame them for hurling when they are up in Division 1A and challenging for silverware.

“Our team had the likes of Red Barry, Ciaran, Brian Malone and others who would have chosen football ahead of hurling, and that’s because we were doing well that time. So it’s a combination of things.

“Paul has had to introduce about 20 new players to the panel this year, between retirements and hurling and everything else. It will take those lads two to three years to get up to inter-county level, because there is no comparison between club and county. I know it took me a few years.“The likes of Ciaran and Daithi Waters and Brian missed the league, but there were no heavy beatings, so there are some positives. Red cards cost us in a few games but I wouldn’t say discipline is an issue.”

It’s been ten years since these two counties have clashed, and Forde explains that there was never any real poison between them.They are sides that have always liked to play good football, so the Kilanerin man recalls only expansive games without any real needle.

“Yeah it was always good stuff to watch, with plenty of scores,” the 2004 All Star says.“After how the early part of the year went, I didn’t give Wexford much chance of doing much in the championship.”

“I think the win at home to Armagh was a big boost though, and I know they were coming down to win that game even though they had been promoted already .I spoke with one of their selectors in the week leading into it, and he told me that.“Laois might be moving in the right direction now, but I still give Wexford a chance.”