Mayo’s problem was a matter of approach, and the statistics bear that out

“Mayo are in terminal decline.” It’s a nice line from Colm O’Rourke, but the question is whether it’s overly simplistic.

Even the most partisan amongst the crowd in MacHale Park would agree that what we witnessed was a poor spectacle, as neither Connacht rival hit their peak, but to understand why they failed to fire some statistical analysis might offer a considered opinion.

The first thing is this: Mayo can fix what went wrong, the stats show us that. The second? They could, and possibly should, have won this game. Their problem was a matter of approach, and the statistics tend to bear that out. The loss of Cillian O’Connor from the starting line-up robbed Mayo of their most valuable scoring asset and as a consequence Mayo never quite got at Galway upfront, and perhaps in some ways, their methods reflected this fact. The devil is in the detail, though, so let’s have a peek under the bonnet.

Mayo took 12 shots inside the scoring zone (marked in green, graph 1) and scored 11 of them, whereas they missed with 14 of the 15 efforts outside of this preferred area (a 6% return). Within county team set-ups, there’s a strong emphasis to shoot from inside the scoring zone, so a review of this game is unlikely to please management. Shot selection is a critical element in the game and in O’Connor’s absence Mayo drifted off script despite dominating possession in the opening period of the game. 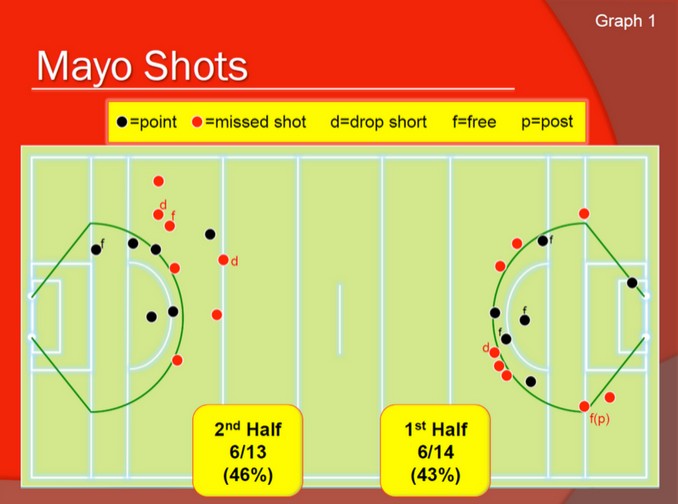 So what happened? Did the Tribesmen force their hosts into bad decision-making? Not particularly. When Kevin Walsh’s men lost possession, they simply dropped back deep and didn’t really engage the man with the ball. Mayo brought the ball up to the ‘45 but didn’t want to risk losing possession, so they played around with it until someone had a pop from a distance. Ironically, O’Connor’s sweet strike with the outside of the boot from 40 yards, having been introduced as a substitute, was the only positive attempt.

A look at Pic 1 shows Conor Loftus with the ball just outside the ‘D,’ and eight defenders all standing off him. The Mayo forward has no support or options inside, and eventually tries his luck. This highlights both the mass defensive system Galway work so well since Paddy Tally came to town, and also demonstrates an untypical attacking approach from Stephen Rochford’s side.

Where is the man coming off the shoulder to drive through? Where is the full-forward looking for a good delivery? Diarmuid O’Connor was still in the game at this stage so the numerical disadvantage that certainly impeded Mayo’ second half s efforts can’t be used as an excuse. That said, the absence of Lee Keegan had a significant impact on the cut and drive that so often comes from Mayo’s half-back line. 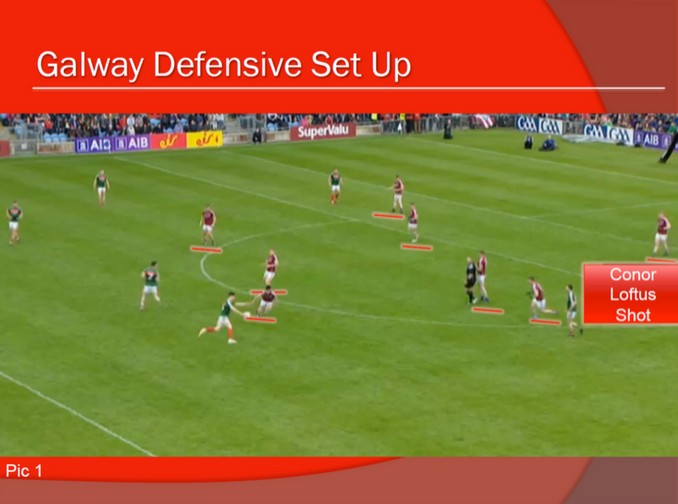 Perhaps the long lay-off between league and Championship was a factor in Mayo’s display against the Tribe. However, as we saw in the last two Championship seasons under Stephen Rochford, the green and red are eminently capable of bouncing back in the qualifiers.

For their part Galway‘s tackle count of 67 is quite low (100 is reasonable), and offers a clear picture of their defensive structure which is heavily weighted on protecting space rather than pressing up to force turnovers in the tackle. Consider the last time a championship challenger turned up to play the All-Ireland holders, and simply filled spaces rather than pressing the ball. That was Tyrone in the 2017 semi-final, and they were picked off over the course of an uncharacteristic display. Dublin were patient, waited for gaps to appear, and burst through.

We have seen in recent seasons that Mayo can compete with the Dubs, so there’s no reason why they shouldn’t be able to take the game to Galway. The Tribal County played against 14 men for the second half, as they did in the league final against Jim Gavin’s side, and the latter took the initiative despite that disadvantage.

Tyrone of old and the Donegal under Jim McGuinness were the masters of swarm tackling, in stark contrast to Galway last Sunday. The maroon shirts put in just 24 tackles in the second half, and you can see how much deeper they went when tackling Mayo between graphs 2 and 3 (i.e. the first and second halves).

To emphasise the point even further, Galway only made two tackles inside their ‘D’ (the most coveted part of the scoring zone), and one resulted in a free for Mayo. The only time Mayo did manage to get a shot off inside the ‘D’ was at the end of Keith Higgins’ rampaging run after 40 minutes to level matters. 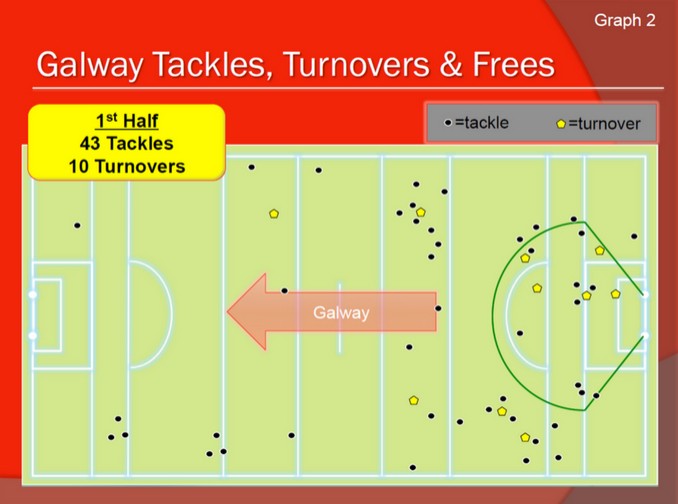 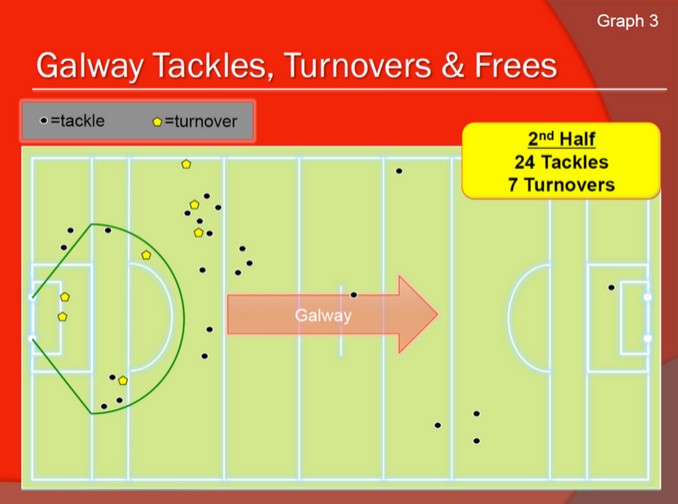 For Mayo to recover they will need all hands on deck and require the likes of Aidan O’Shea to use his power to burst through the defensive wall. A full forward line with both Andy Moran and a fit O’Connor will dovetail between roaming deeper out-field and sitting patiently in front of goal — as Bernard Brogan has talked about in the past — offering the team something to hit on the edge of the square.

Keegan‘s return will add to this and no doubt keeping 15 on the field will assist greatly too,  Still, as they look back they will know they had enough ball to win but execution let them down. Possession is 9/10th of the law, but only if you go on to punish the opposition.

Galway only had to turn the ball over six times in the tackle inside their own ‘45 over the entire game; the other turnovers inside their 45m line came from either intercepted passes or shots that dropped short. Add to this that Mayo didn’t have one goal chance and you will see clear evidence that they needed to ask more questions, because when they did get it right and went for the jugular they won six scoreable frees.

History shows us that Dublin would have realised half-way through the game that they needed to change their approach, and that’s why they continue to edge big games. This was only game one for Galway and Mayo, and they haven't had an easy game or two to ease them into the season. Should one or both make the Super 8s, they would be a very different proposition.

Galway took slightly more of their chances in terms of breaking the line at MacHale Park, and that’s why they prevailed. For Mayo, game one in the qualifiers is the one that can rejuvenate the team’s ambitions, get that right and like last season and the season before, they will once again put themselves in the mix. As with all the stats the key is to use them as a tool to improve rather than a stick to beat. If the detail they provide is taken on board, then the passion that has fuelled Mayo’s recent backdoor revivals can once again kick-start their championship aspirations.