Glenn Ryan's native Kildare and Longford, who he managed from 2009 to 2013, meet in the qualifiers at Pearse Park. The Lilywhites of course are the team closest to his heart but the Round Towers clubman has a great fondness for the royal blue and gold brigade too.

Ryan had some big days with Longford. Notably, running Kerry close in the 2009 All-Ireland qualifier, recording a famous win over Mayo the following year before subsequently losing out to eventual All-Ireland Finalists Down. Then in 2011 and 2012, they were crowned Division 4 and Division 3 league champions respectively.

“The two wins in Croke Park were great days,” says Ryan. “They were great days to be up there and winning. Then beating Mayo down in Pearse Park, that was a big win as well. I think eight or nine of those Mayo players went on to play in All-Ireland finals.”

It was an even more striking result because Longford had finished seventh out of nine teams in the fourth tier that season, claiming just two wins. They finished ahead of only London and Kilkenny.

“It was a huge win for Longford because we were after having a poor league,” he adds. “I don't think we got out of Division 4 that year. It was a massive win; if I didn't win that day then I might not have been there the following year.”

“In fairness, I got great support down there and I never felt under pressure. Personally, I put myself under pressure because when you look at these things in cold reality, it [the season] wouldn't have been good enough so it was a massive win from that perspective.”

Ryan managed the Kildare Under-21s to an All-Ireland final in 2008, losing to Kerry, and it’s notable that not a single member of that side was around for the recent qualifier win over Derry.

Cian O’Neill’s men snapped a 12-game losing streak against the Oak Leaf County that day, with the Leinster defeat to Carlow perhaps the most damaging.

“I was over in Stansted Airport listening to it,” says Ryan. “I had been at the Aston Villa versus Fulham Championship play-off final the day before at Wembley. The flights out of Stansted were delayed because the lightning was bad that weekend, and it affected the fuel system, so we didn't get our flight until late on Sunday evening.

“I wouldn't say disbelief, just that I was surprised that Kildare performed so poorly,” he says of the result. “Disappointment that they hadn't won the game but you have to give great respect to Carlow for achieving what they have.”

“That group of players would have suffered some big defeats in league and championship over the years and to get themselves motivated and organised as they have over the past couple of months deserves great respect.”

“Kildare are a committed group and certainly they are underachieving, and we all hope they can get it together again this weekend and get another win. Because when you're winning it doesn't matter who you're getting them against, once you can get wins under your belt it can be huge and they can define teams in many ways.” 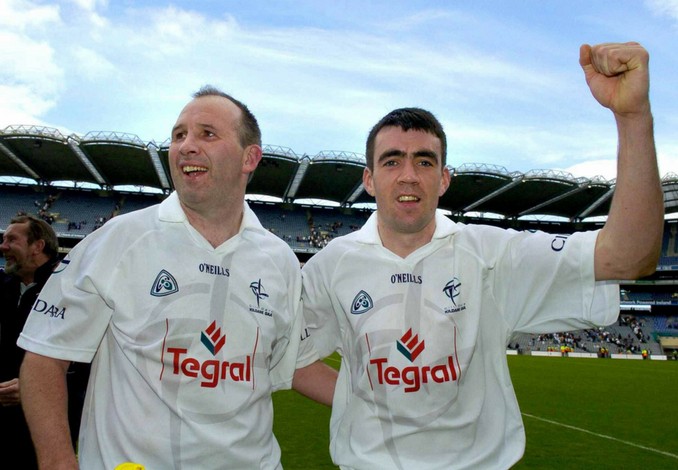 Ryan never managed Longford against his native side in a game of significance, and indeed he never played against the county he would later manage in a big clash.

“We played against Kildare in an O’Byrne Cup match, and they hammered us,” he laughs of the 0-16 to 0-8 loss in 2011. “I was glad that we didn't come up against Kildare in any other competition. It was in Newbridge and I think it could have been the first game of the O'Byrne Cup so there wasn't much importance put on it. Kieran McGeeney was managing them.”

The two sides come into this weekend off the back of some very different results. The Lilies won with eight points to spare against Derry, while Longford were on the end of a heavy Leinster semi-final defeat to Dublin.

“I'm sure Longford are delighted to have the game at home in Pearse Park, I think that's something,” Ryan says. “Longford are a better side than purely saying they are a Pearse Park team though. They've managed to go away and get great results: a couple of years ago they went to Clones and beat Monaghan, and a couple of years ago they beat Derry in the qualifiers. They beat Down as well.”

“I would say it's a great opportunity for Kildare, as well. I'm sure the Pearse Park factor will take some of the pressure off Kildare, and I think it's a game that Kildare can go into a confidently despite the year that they've had. The win against Derry should be a big confidence boost.

“I think it will be a battle which is a good thing. I have great admiration for Longford football and for the people down in Longford. But I think on this occasion Kildare will do it.”