Few people can tell you what it’s like to run out in front of 33,544 at Croke Park, and also describe the buzz of playing at Electric Picnic.

Ross McNerney is that man. He had the talent to play football for Longford, but hung up his boots at the age of 23 because life with the band ‘Brave Giant’ had taken over.

Yet just three years ago, the Dromard native was fulfilling a lifelong dream by lining out against Dublin in the Leinster championship. McNerney will be watching from afar this Sunday as Denis Connerton brings Longford back up to the capital to take on Jim Gavin’s powerhouse, hoping for the improbable.

Speaking of slim odds, it’s incredibly tough to make it in the music industry too, but Brave Giant have been on quite a journey. They progressed from a cover-band to doing originals, had a viral hit with ‘Is This Digital Love?’ which doubled their social following, recruited Joe Rooney (aka Father Damo from ‘Father Ted’) to star in their video for ‘The Time I Met The Devil’, performed on the ‘Late Late Show’, and made appearances at Longitude and Electric Picnic.

It’s a long way from kicking an O’Neills around Pearse Park, even if one of the common features between his GAA days and being on stage with the band is the presence of a crowd. But, as McNerney explains, your interaction with the people there is quite different.

“There’s no better feeling than when you run out the tunnel and see the big crowd,” he says. I genuinely never will forget the Dublin game in Croke Park for that. I couldn't really describe it.

“There was like a constant murmur when you were kicking around beforehand, and you were trying to block it out essentially. Then when the game started, you just ignored them; you had to put it into the back of your head and carry on, whereas it is literally the complete opposite on a stage.”

“You get all your energy from the crowd and everything you do is for them, essentially. So you're feeding off them and trying to get involved with them, using the crowd at a gig to fuel it.

“It's very different, and I've never really thought about it, but they're literally polar opposites. At the same time, they're all there to watch you, whether they've come to see football or a gig, or whatever it might be — they've come to be entertained.”

McNerney grew up in a musical house, and had a banjo thrust into his hands from the age of four or five. He always loved it, but it wasn’t until he was 15 or 16 that it began to rival football as his big passion.

As the years went on, juggling the two became more difficult. There were times when he would have to be up at 8:00am for Longford training, even though he might only have gotten home from playing a gig three hours earlier. Life with the band kept getting better though, and ultimately a decision had to be made.

In 2016, he told Connerton that his county days were over, and did so with a heavy heart. Club football had to give way too in 2017, because gigs and club championship are both at their busiest during the summer.

“I kind of laugh at the idea of hanging up the boots at 23, and it's definitely not what I intended on. My family loves GAA, my father in particular, and music as well. So the thought of this would never have crossed my mind when I was playing football at 16 or 17, to think that I wouldn't be playing anymore.

“So I suppose it's just the way life came, and as I said with the band we're trying to get to the next stage. We've achieved great things and we're really proud of what we've done. The band is essentially the same as GAA, it's a hobby and we have careers and day jobs — I'm a teacher (in Stepaside, Dublin) by day. The band just requires that extra bit of work and, if we want to get to the next stage, it needs all hands on deck.”

Brave Giant are chasing the dream but the reality of paying bills has to come into play too, which is not the rock-and-roll answer you might expect. McNerney explains that they coordinate over WhatsApp every day, and then have ultra-productive jamming and recording sessions when they meet at weekends and on holidays — with the Dromard man relocating to home during the summer.

Their next big gig is the Sea Sessions in Donegal on June 22, and their biggest aim is to add to the EP (extended play record) and four singles they’ve already put out, by releasing a full album.

“You know as much as me,” McNerney jokes of how to take the band to the next level. “There is no real formula or method to it. Everyone does it differently, we used social media to our advantage starting off to gain more followers.

“But how it gets to the next stage is unknown, as such. We're going to just keep playing gigs and writing new music and releasing it, and hoping that the right ears hear it and like it.

“It’s a tough game but there is so much reward,” he adds. “What do we want to achieve as a band? We want an album and that's our initial main aim as a band; we don't want to finish saying we didn't have an album.

“We want to look back in 20 or 30 years’ time and have that CD or vinyl on the mantelpiece.” 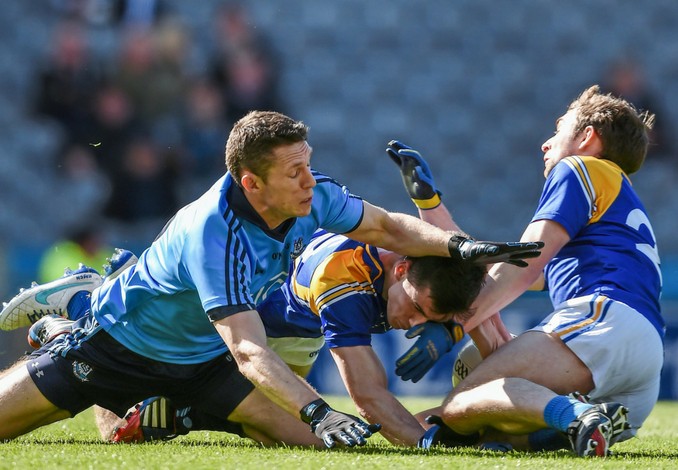 Back with the game against the Dubs in 2015, it was a day that didn’t end particularly well for McNerney. In fact, that’s quite an understatement. The game had to be stopped for several minutes after a diving clash for the ball involving himself, teammate Pauric Gill, and rival Darren Daly. Gill needed to ice his sensitive zone for a number of minutes before continuing, while the Brave Giant was stretchered off with concussion.

“I still think there's a bit of them left in Croke Park,” McNerney laughs of Gill’s misfortune. “Excuse the pun, but I can't really remember it myself. I know I gave Pauric the shot in the jewels, but I don't know who gave me the dunt that left me panned out. The worst part is that my mother wasn't at the game and was watching it on telly, and Kevin McStay was going on about how long the game was stopped for: nine or ten minutes. It was one way to go out of Croke Park!

“I remember one of the lads saying you could have gone down a bit earlier,” he says, referring to the pressure his team had been under all game. “To be totally honest, it's still a memory that I'm very fond of.

“Growing up in Longford, every child’s dream is to play on a sunny day in Croke Park. To run out that day and see a sea of blue, there was no better feeling. Yes, the result didn’t go our way… but it doesn't take away from the feeling of playing on that field on that day. It finished on a little bit of a negative note for me as well as a team, but I still do look back on it as a fond memory. Not everyone gets a chance to play Croke Park, and you have to be grateful for that.”

McNerney still meets up with some of his old teammates, and was wishing the likes of Mickey Quinn luck before the historic win over Meath. Longford are in their first Leinster semi-final for 30 years, but their task against Dublin is colossal.

“I can’t see Dublin having too many problems with Longford but at the same time I don't think it will be the same clipping we got three years ago. Denis Connerton is a shrewd man and they're not coming up to make up the numbers.

“You never go on a bus journey feeling like that; you're in your own zone and you come up with your own mindset, and they're going to want to put in a good performance. I do think they can do that.”