Tom Parsons: I could be spending four or five hours per day getting the knee ready for the next surgery

Tom Parsons spends up to five hours each day trying to come back from a catastrophic knee injury.

It’s just six weeks since he suffered the blow against Galway in the Connacht Championship, and four weeks on from a first operation to repair the damage. It will be a long road back after rupturing three of the four ligaments in his knee, and tearing the fourth — not to mention the other complications involved.

The Charlestown man has a “really deep desire and motivation to play for Mayo again”, one that was underlined for him after watching the recent wins over Limerick and Tipperary from the side-lines.

His mind is filled only with thoughts of rehabilitation and recovery, and on reaching the small weekly targets that signpost his way back into a pair of boots and onto the field of play.

Without question, Parsons’ story is one that has touched the nation, and his best estimate is that he has received thousands of messages of support across the different platforms, from letters to messages on Instagram, Twitter and Facebook.

In terms of never getting back onto the field, the midfielder is frank in his reply, “That idea doesn’t exist to me. Whether I play again or not is just an opinion at this stage. No one has ruled it out from a medical point of view, so I have no reason to think that. The best approach is to just focus on the steps back. There’s no point in thinking back to the ‘what ifs’, or the ‘coulda shoulda wouldas’, because there’s no purpose in that.”

In terms of the steps involved in recovery, it’s a galling checklist. Over and over again, Parsons has to take the same steps to build up his knee so that it is ready for a second major surgery later this year.

“Firstly, the body is amazing given the right environment, and if you follow the recovery guidelines and spend the hours with physios undertaking rehab,” says Parsons, “you do see small improvements every day. That’s exactly where I’m at just now. I’m at a position where I can work with my physio, I’m undertaking rehab exercises and trying to exercise my calf, hamstring, quad and all the muscles around the knee.

“It’s a really time-consuming junction of the injury in terms of rehab, because it’s very light, diligent, and you’re using light-resistance bands and passive exercises. I’ll be honest, I could be spending four or five hours per day on different things to get the knee ready for the next surgery.

“Between using a Game Ready ice machine, using an electrotherapy Tens machine, getting soft-tissue massage, and then about 90 minutes of rehab exercises, and maybe rotating that twice per day, it’s very time-consuming. So, you don’t have the opportunity or luxury of sitting at a desk for eight or nine hours per day, because that would be a total no-no for the injury. So, at the moment, I’m out of work and have total focus on trying to get it right.” 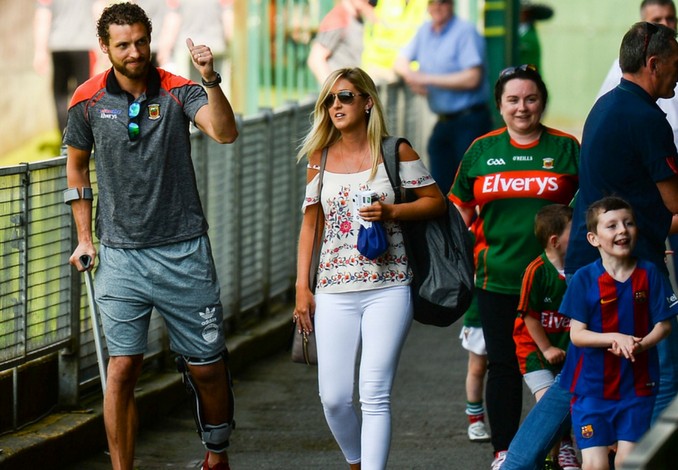 Parsons is happy with the strength and range of movement he has at this stage of his recovery. Part of his calf came off the bone and damage was done to his hamstring and quad, so the size of the task is substantial. It helps that his wife, Carol, is a physiotherapist and can help manage his recovery.

Parsons has been trying to link up with the Mayo panel at least once per week, and that’s largely been when Stephen Rochford gathers the troops in the midlands. Because the Charlestown man is based in Dublin, it would be too much for his knee to travel all the way across to the west. He has been encouraged to contribute in any way he can, be that in terms of previewing and reviewing games, or imparting words of advice to the younger panel members. 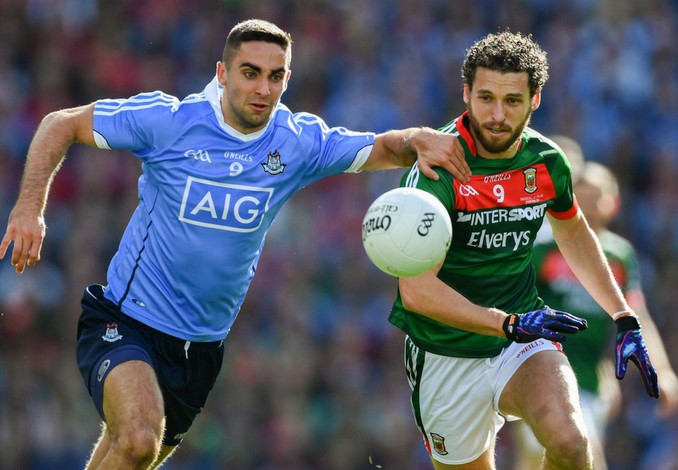 Parsons admits that the injury has been difficult to deal with, but he’s tried to keep a constructive mindset. He has no control over what happened, but can control how he bounces back.

“The only date I have at the moment is early September, the first or the sixth, for my second surgery, to complete the reconstruction of my ACL (anterior cruciate ligament) and PCL (posterior cruciate ligament). So, I’m not looking beyond that surgery at all, I’m just preparing myself for that. My programme of rehab brings me right up until September and we’ll devise a plan after that.”

Given the nature of the injury, Parsons will be out of work for the foreseeable future.

“I’ll certainly be wearing a brace and crutch for up to four or five months after the injury, and that means I’m certainly out of work for that period of time. Because A, even from a HR point of view, I’m not fit to work; and B, from a recovery point of view, a big no-no would be to drive or sit at a desk, and not to be carrying out my rehab.

“We are looking at a very lengthy time period and pending how the recovery goes after my second operation, that will dictate whether I’m able to return to work in October, November or December. I’m certainly targeting to be back in work this side of Christmas.”

There have been some positives amid the gloom. Two weeks ago, his sister, her husband and their baby stayed over at his house in Dublin. That would not have been possible if he was on Mayo duty. “You have to see the positives,” he explains.

The ovations he has received at Mayo’s games against Limerick and Tipperary have been heart-warming too. “I was trying to keep my head down but it’s hard not to stand out when you have a crutch, the leg brace, and the curly head of hair, like you said! When you’re playing with a county at this level, you’re in a bubble and you don’t allow external factors in — you want to focus on the game. I’m still part of the panel but there is a realisation I’m out of action, and I think there’s a special bond between our panel and the supporters. They wear their hearts on their sleeves, just like the players do. I’ve enjoyed spending time with the fans before and after games, and just seeing the passion they have. So that’s been great.” 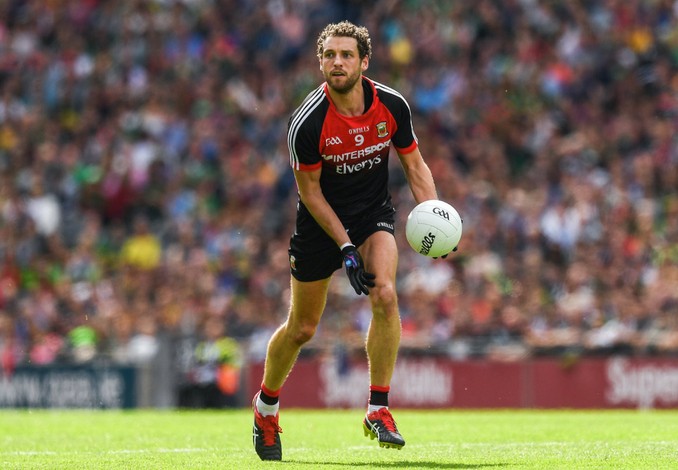 The furore over where the clash with Kildare is to be played has rumbled this week, and Parsons says that Mayo respect the stand taken by the Lilywhites. At the same time, they won’t get bogged down in it.

“From our point of view, we don’t care where the game is played, whether that’s in Newbridge, Croke Park, or even Portlaoise. We have a very limited window in which to prepare for this game so we can’t be putting any focus or energy on it. Our time is spent on recovery, dealing with knocks, and on preparing for the Kildare challenge.”

Rochford not only had to deal with the loss of Parsons, but his midfield partner Seamie O’Shea, who is facing a prolonged absence after injury to his shoulder against the Premier County. “The way we looked at it is that you need a strong panel for the season, and especially for the Super 8s,” says Parsons. “Teams are always likely to lose key players along the way and while he is a huge loss, you have to see it as an opportunity for other lads. You need to build a panel to cater for injuries.”

As with his own injury, Parsons is staying positive, and hoping hard work brings its reward.