Galway have had the Indian sign over the Lilywhites, for the most part, since 1998. That glorious final played by two hard, committed and skilful teams still resonates strongly with both counties. These teams included skilful forwards such as Martin Lynch, Eddie McCormack, Derek Savage and Niall Finnegan, outstanding fielders such as Willie McCreery, Niall Buckley and Kevin Walsh, attacking wing-backs like Sean Og De Paor and Anthony Rainbow, and tenacious defenders like Tomas Mannion, Brian Lacey, Glenn Ryan and Gary Fahy. What was the difference between the two sides in 1998 and 2000? The difference was class forwards who could play in any era of Gaelic Football, past or present. Who were those forwards? They were Padraic Joyce, Michael Donnellan and Ja Fallon.

I too sampled this Indian sign, when I lined out for the Lilywhites against Galway in a NFL game in 2006. Played on a cold March Sunday afternoon in Newbridge, my former comrades came out on top in a typically hard-fought league battle. It finished 9-8 to Galway with the class of Padraic Joyce, Savage and Mattie Clancy saving the day for the Tribesmen. No hard feelings between me and my former teammates, as friendships come first and foremost. And when football careers finish, you need your friends. I played with Enda Murphy and Roly Sweeney on that day, and now they’ll be hatching a plan for Galway on Sunday.

We were blessed to have three of the greatest forwards on our Galway team and without them, there would have been no glorious days since the famous three-in-a-row team. Our fortune was Kildare’s misfortune and, unfortunately for the present Kildare team, they are coming up against three more brilliant Galway attackers, namely Shane Walsh, Ian Burke and Damien Comer. Can they be curtailed and, if so, who will curtail them? 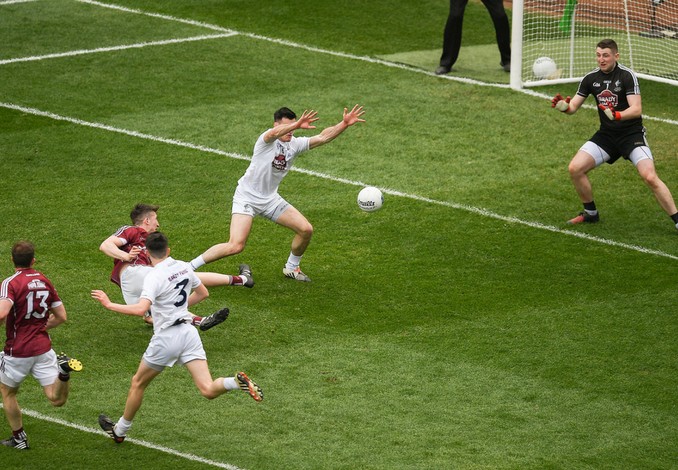 Both netminders are comfortable going long or short, but having watched them both several times, they both prefer to hit their big guns further out the field. Mark Donnellan will launch it 60 metres into his trio of Tommy Moolick, Fergal Conway and Kevin Feely while Galway’s Ruairi Lavelle will be aiming for his duo of Peter Cooke and Tom Flynn. This should be a cracking encounter around the middle third as all five players named will fancy their chances of bagging numerous marks. With weather conditions expected to be dry, this aerial combat could be special. The battle on the ground between these midfielders will also be interesting. I expect Cooke to shackle Feely. Both are superb fielders, score-getters and free-takers. Feely is key to Kildare’s chances. When he is zipping up and down the field and orchestrating the play, Kildare normally play very well and win. I would be encouraging Cooke to sacrifice his own game a little and really nullify Feely’s threat. If Cooke performs this role diligently, then Galway’s chances of success increase dramatically. The other Kildare player who needs to be quietened is Daniel Flynn.

Flynn is such an exciting player to watch and you don’t have to be from Kildare to appreciate his talents. The problem for him and Kildare is that he doesn’t get enough supply. Daniel could receive three consecutive passes in the first ten minutes but then completely fade out of the game for the next 20 minutes. There’s a simple yet sometimes unspoken rule when you’ve a very dangerous player upfront in your team. It is ‘give him the ball as often as you can, especially if he’s in good form’. Flynn is in great form. Kildare need to increase their supply lines to him. He’s not fussy. He has the potential to win every ball that’s bombed into the square, sprayed into the corners or dinked into the ‘D’ in front of him. I expect Sean Andy O Ceallaigh to get stuck into Daniel. They are two six-foot plus giants who won’t hold back and who both inspire their teams and supporters. You can expect a huge roar from the terraces every-time this pair go tearing after the size-5 O’Neill’s ball. I expect several frees could be awarded to Kildare as a result of this tussle. 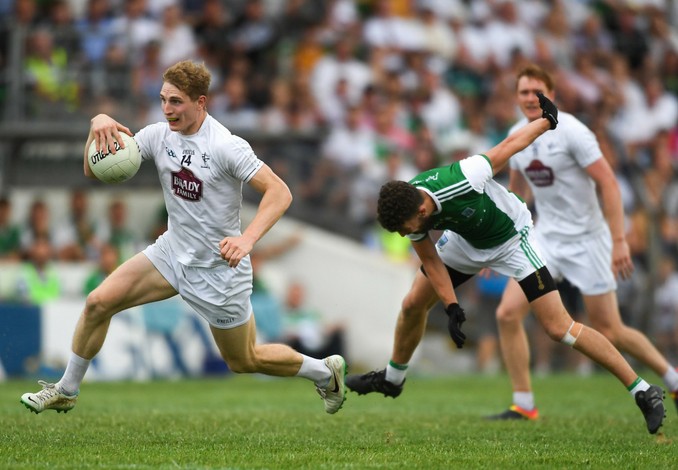 Speaking of frees, Kildare have found a steady guy in Neil Flynn. He’s very comfortable from most angles but especially on the left side. Feely usually picks up the pieces on the right side. Due to the enormous pressure on Kildare to win this game, it will be interesting to see if Neil Flynn will be able to convert all his chances. He was superb against Mayo in St Conleth’s a few weeks ago and he is also excellent from open play. I expect Eoghan Kerin to be given the job of curtailing his influence. So, who will be victorious?

Both full back lines love to join the attack. Both half back lines are very similar in their approach to play. Both midfields have the potential to gain huge amounts of primary possession. Both half-forward lines have a massive work ethic and raid up and down the flanks. Both full forward lines possess talented finishers. Both benches have made massive impacts in recent games. What will be the difference?

Will it be Daniel Flynn producing some magic moments that will lift his team or will it be Feely catching every kick out? Perhaps, it will just come back to the long-held belief that ‘good quality forwards win games’. If this is the case, then Galway presently possess a few really good ones.