Stephen Attride: “The last thing I remember was going in for that ball and after that it's a blur really”

“I remember everything before the incident but the rest of that day and some of the Monday is hazy.”

Laois football captain Stephen Attride remembers very little after he threw himself on a breaking ball in the dying minutes of the Leinster semi-final against Carlow. Few others will forget the image of his horrific facial injuries, especially not O'Moore teammates and fans who appreciated the ultra-heroic tackle which helped earn them their first Leinster Final appearance in 11 years.

The Killeshin defender suffered a double-facial fracture that needed 25 stitches but the real worry was his eye-sight.

One of the fractures was above his right eyebrow but the other was to his eye-socket and medics initially feared his sight would be damaged. Thankfully, four weeks later, he is well on his way to recovery and the knowledge that he avoided long-term damage certainly helped lessen his frustration at being sidelined.

“I remember everything before the incident but the rest of that day and some of the Monday is hazy,” Attride recalls.

“The last thing I remember was going in for that ball and after that it's a blur really. I've had flash-backs to the ambulance and I remember getting the stitches.

“That was a bit of an ordeal because they numbed my forehead with a local anaesthetic. So I could feel the needle going in and out but had no pain, which was very weird! Initially they were more worried about my vision and possible damage to the optic nerve, he reveals.

“I can still get some pain around the fractures but thankfully I'm in the clear now. I go up to St James' for check-ups every Thursday and they're happy with my recovery.

“I was quite badly concussed and had double-vision on the Sunday night so initially I couldn't train or do anything for three full weeks. That was tough. I got cabin fever after a while.

“But there's been no floaters or any problems with my sight since and I'm healing well. The bruising has all gone done and I just have a scar,” he adds.

“You can return to contact 6-8 weeks after that kind of concussion so depending on how I heal I could be back in another three to five weeks. I went back for the first time last Sunday week and did some jogging and have been doing some light training since.”

Attride's tackle was regarded as particularly heroic but he confesses: “I genuinely wasn't conscious of the score or the minute the game was in. The ball was just there to be won and I was going to win it any way I could.

“In one way I was lucky because it was in Croke Park and I was taken off the pitch on a go-cart and brought straight to the Mater. We were there in five minutes and my mam and our team doctor were in the ambulance with me.”

His mother also had another emergency to deal with. The 24-year-old teacher was due to start supervising the Junior Cert in Borris Vocational School the following morning so a replacement had to be hastily organised.

In the aftermath he got 'get well' texts from Ciaran Moran, the Carlow player with whom he accidentally collided, and well wishes from several more of his opponents, including their manager Turlough O'Brien.

That is not surprising considering the sides' close proximity on and off the pitch – they also met in this year's Division Four final which Laois won. Attride is a PE and Science teacher in Knockbeg College where he went to school himself at the same time as several of the current Carlow squad. 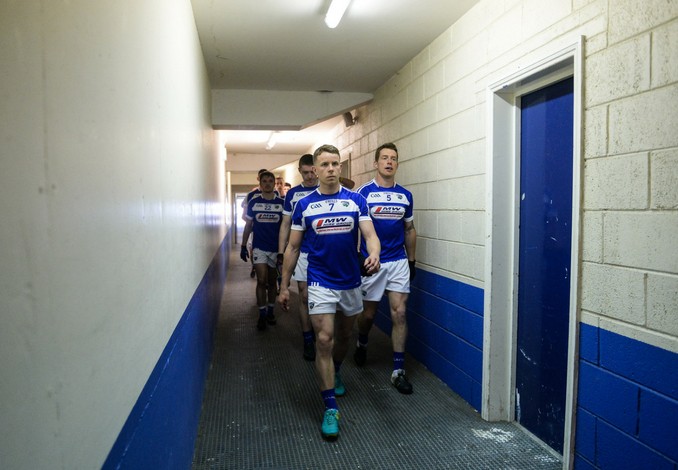 “My club is only five minutes from Carlow town. There's a lot of debate over whether Knockbeg is actually in Laois or Carlow and I'm teaching kids from Carlow too so there's been plenty of good banter all year. It's been very hard to listen to this 'Carlow Rising' stuff,” he quips.

“It was kind of heart-breaking missing out on the Leinster final and our qualifier against Monaghan,” he admits, though he still tried to play a part.

“In the lead-up to the Dublin game I was going over to training and helping any way I could with water-bottles or feedback. On the day John Sugrue asked me to lead the team in the parade which was a real privilege and a great experience.

“Looking back on the scoreline you couldn't but be disappointed but we were competitive in the first half and played a good style of football, not all defensive the way some teams go. “The problem is that Dublin are just relentless,” he observes. “They're several levels above what we've been playing this year but that game will do us no harm, we had plenty of learning to take from it.”

Laois' fall from grace in recent seasons has been marked by some fan apathy and they were noticeably outnumbered by Carlow supporters at the Division Four final but Attride feels they've gone a considerable distance in winning them back with their five-game run this summer.

“We know ourselves the last few years weren't good enough. We were in steady decline and we had only ourselves to blame for the drop-in support.

“But now that the buzz is back it's great to see Laois people come out to support the team again and there was a great crowd at the Leinster final.”

His rehab is being done, coincidentally, in the company of another Laois player - Daniel O'Reilly – who suffered even worse head injuries when he was the victim of a savage street assault last Easter.

“Daniel was far worse than me,” Attride stresses.

“He had several bleeds from the brain and his prognosis was six months without contact. Initially, because of that, I feared the worse before my first check-up. I had it in my head I wouldn't be playing football again this year. But Daniel is in good form as well now and we'd been training together, non-contact stuff, at county sessions in the past week. That's a lot better than I thought initially to be honest.”

That five-point defeat by Monaghan in the final round of the Qualifiers put paid to his plan to return during the Super Eights but, given the severity of his injuries, Laois' warrior defender has a lot still to be grateful for and should be back to lead the O'Moores again next season.