Stephen Rochford: I think this will be a more open game

The way Dublin dismantled a very defensive Tyrone team in 2017 makes me think we will have a very different game in this year’s final. Mickey Harte and his backroom team understand that this approach doesn’t work and there has been evidence throughout the season that they have become more attack minded.

There will be times when both teams will have 13 or 14 players in their own half, but I still think it will be reasonably open. Tyrone have no option but to try to take on Dublin, and at times even go 15-on-15. That doesn’t mean they have to do it all the time, but you can’t continue to leave 13 men within 55 metres of your own goal and let the Dubs control the tempo of the game. They will be patient on the ball, control possession, and any Tyrone man sitting back needs to keep his concentration and be ready when the shooters get the ball.

If you’re in Mickey’s shoes, you’ve a big role in strategising for the final; you realise that it’s not as simple as trying to target one area of the Dublin team. You can’t double-mark lads because Dublin have so much individual quality, meaning the match-ups are going to be vital. I expect there to be eight to ten match-ups targeted overall between both managers. The obvious one is Peter Harte being picked up by John Small, which we’ve seen last year and in the Super 8s recently too.

So, what does Mickey do to ensure that this battle plays out in his favour? Maybe Peter Harte can play a different position, perhaps further out the field, in a position that doesn’t favour the Dublin man, and hopefully this upsets their rhythm for a time. The Dubs are so experienced that they’ll find a way to deal with it, but you need to ask questions, and get some joy even if it’s just for a short spell. 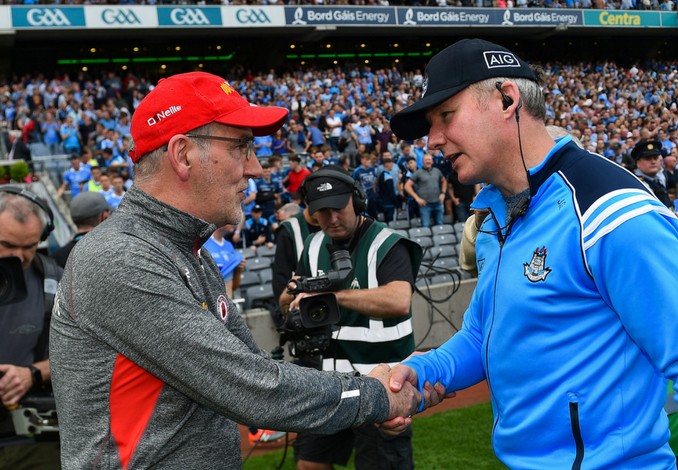 No matter where Peter plays, John will shadow him, and he has been very effective at it. If Jim Gavin targets a couple of match-ups, and they pay off, then the other Tyrone forwards will have to step up. Eoin Murchan latched onto the roving Niall Sludden when the sides played at Healy Park, but we saw since that, the Na Fianna man had a few headaches when marking Ian Burke closer to goal in the semi-final. What questions can Tyrone ask here? Sludden is a pacey guy so maybe he can play inside as a one or part of a two-man inside forward line, if only for a period of time. That might leave four men in the half-forwards, and they can push three into the midfield at times. It’s something that Dublin then have to counter and think about. If Cian O’Sullivan or a Johnny Cooper then drop in front of the full-back line, perhaps that means Tyrone’s running game out the field is given more room. It’s all about ifs and buts, and testing them out.

I think Mickey will put Padraig Hampsey on Con O’Callaghan, Michael McKernan on Paul Mannion (and that’s a tough ask for a final newcomer on a form man), Ronan McNamee on Dean Rock, and I wouldn’t be shocked if the energy and speed of Cathal McShane tried to upset Brian Fenton. The Raheny man can change gears very quickly, glide from first to fourth, and I think you need to do more than just try to lock him down, and perhaps McShane’s legs can do that. If Conor Meyler is fit enough to start, which we don’t yet know, he could match-up with Ciaran Kilkenny.

The kickouts are always a huge area and you need to find a balance. The question comes over whether you expend more energy pressing on a Dublin kickout, or when you spend the next minute or so chasing after them. What do you even define as pushing up? Is it going man-for-man with a focus on zonal, is it seven v six, and so on? It sounds complicated, but repetition and practice means all the players know what the plan is. 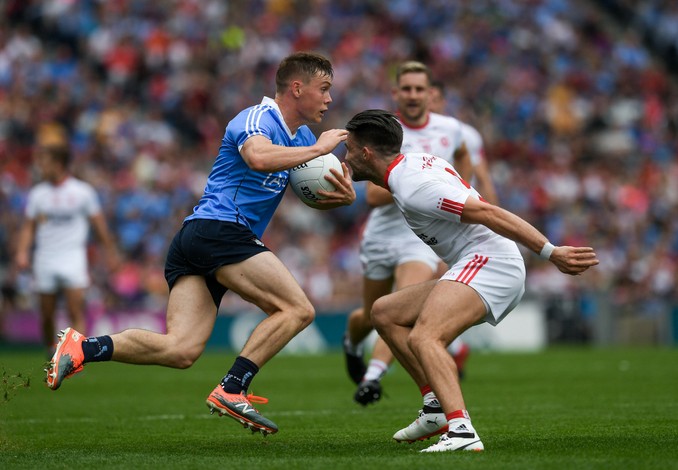 One thing is for sure, you can’t go after every restart by Stephen Cluxton. As soon as the umpire is signalling wide or score, he’s putting the ball down and looking for a man. Mickey will put a lot of thought into this and might settle on targeting about three kickouts per half; if they could turn over six of them, that would be a huge boost. It works both ways and I think the bigger target might be winning 100% of their own. Niall Morgan has a great boot and is accurate, and it’s important he can find his men. Dublin will go after him too.

The issue with Dublin is that the danger comes from any player wearing a shirt from one to 26. Even if you do limit some of their players to a six or seven out of ten performance, they have so many weapons. It’s very hard to see past a Dublin win, and that goes on form, quality, trends in their matches, and results between these two teams. Nobody gave us a chance in 2016 but we took them to a replay and lost by just a point, so Tyrone have nothing to lose. The Tyrone underdog tag is very dangerous.

Dublin hit 25 scores against Galway in the semi-final despite the latter having a good defensive shape. When Kevin Walsh had to push his team out and chase the game, we saw the perpetual motion of the Dublin forward line. Right now, it’s hard to back against the Dubs, but it’s all about whether Tyrone can bring something new to the game. It’s about getting a good score conversion from play, a strong return from the inside line, and unsettling Jim’s team.

I don’t think we’ll have a repeat of the 2017 All-Ireland semi-final score line, but I’d still feel that Dublin can win by four points.