Wayne Hutchinson: I wanted to help fellow players who might also be struggling

Wayne Hutchinson returned to Ballygunner because he had unfinished business there.

The former Waterford star moved to Dublin, where he has since bought a home with his fiancé, and the commute back had been taking its toll. So, after years of tracking up and down the M9, Hutchinson finally made the switch to St Jude’s in 2015. The Templeogue-based side had been in pole position to win a county final against Kilmacud Crokes a year earlier, but lost after extra time, and they hoped to kick on again.

In Hutchinson’s one season with Judes in 2015 they would make it back to the Dublin decider where Cuala would edge the contest, but there had been another pulsating meeting with Crokes along the way. It was another game that went to extra time, and Hutchinson was to become a star in the fading light at O’Toole Park.

The centre-back settled the game with two awesome long-range frees from his own half, with the winner coming from around his own ‘45. Three years on, he’s back in Waterford and has just helped Ballygunner complete a historic first five-in-a-row of county titles with victory over Abbeyside.

“I was moving to Dublin and I had been playing with Ballygunner for a long time, going up and down the country,” says the 33-year-old medical rep. “I’m the sort who always wants to give 100 per cent, but I wasn’t able to commit the way I wanted to as things were. At the same time, I love hurling, so I didn’t want to give that up either. I had a contact in St Jude’s, and I could see there were good lads there and they had a lot of potential.

“It was a very enjoyable experience with them and I still stay in touch with the lads. I’ve a house in Dublin, I’m getting married, and it might be a case that I get involved with them again in the future.”

As for that classic encounter with Kilmacud three years ago, he says: “That was fantastic. Crokes were red-hot favourites and I had started the year playing at centre-forward and taking the frees. The frees had been going well so I kept at the long-range ones when I moved into the half-back line. I don’t know how that last one went over. It was great to win the game, but we didn’t win the title.

“It was a great experience and they were disappointed to see me go (after one season), but they understood too. I missed the link to home and I saw what others were sacrificing to make it back down, and there was unfinished business there in terms of winning an AIB Munster title.”

The Waterford kingpins have played in nine provincial finals throughout their history but won just one, against Blackrock in 2001. Ballygunner have come up short against Na Piarsaigh in a couple of Munster finals recently (2015, 2017) and last year were in a strong position before the Limerick side roared back to take the win.

“We were well in the game, but Na Piarsaigh took over in the middle-eight with their strong players and we failed to deal with it. Hopefully we’ll use it as a learning experience and be ready to kick on again this year.” 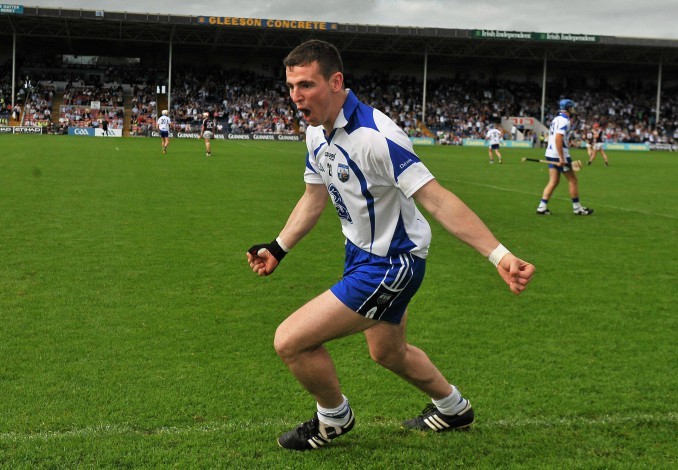 Away from the field, Hutchinson made a deep impression on the GAA public and beyond by penning a blog called ‘Depression and Me’ in 2014. It detailed his battle, and came on the back of another affecting piece written by former Cork hurler Conor Cusack.

“At the time, I was going through some tough stuff,” says Hutchinson. “I had read Conor Cusack’s blog and it gave me a lift because I saw the impact it had had. So, I said, ‘I hope I can help even one person in the same way’. I didn’t realise the impact it would have.

“I wanted to help fellow players who might also be struggling and going through a similar thing. To talk and know it’s okay to not be okay, and that it’s okay to talk about it. I didn’t do too much thinking about it bar talking to family and some friends, and then I just posted the blog.”

Hutchinson explains that his life was turned upside down because of the piece. When he considers the wave he rode off the back of the article, he can identify both peaks and troughs.

“So, the advantage is that I got a lot of feedback from people in similar situations and lads who would ring me up for a chat. They didn’t ring me as a counsellor, because I’m not qualified, but we were able to have a chat without any judgment. So that was a big positive.

“The disadvantage was that it was a little overwhelming at times because of the calls and being asked to go to events and get involved with charities. Now of course I wanted to help but I was getting collared by a lot of people, and I was also in a place where I needed to look after myself too. So, it was a case of learning to say no in order to mind yourself, and to also look after your career, and sport, and your different relationships. It's very close to my heart but I didn’t want to make promises and not be able to deliver.”

The Ballygunner man feels that we’ve come a long way in terms of raising awareness around mental health issues but notes that suicide rates are still very high in the country. He commends the services offered by the GPA (Gaelic Players Association) at inter-county level but raises the question of where others can turn if they are struggling.

When it comes to his own wellbeing, Hutchinson calls it straight: “Whether you’re talking about the physical or the mental side of yourself, you have ups and downs. Some days are good, and some are bad. I think physical health is important for your mental health, and so too is diet and nutrition. So is having friends you can trust, it’s very important.

“It’s good to focus on your career and set some goals. I try to read a lot and avoid social media. Whether it’s Facebook, Twitter or Instagram, it can bring you down and it’s unproductive. Anyway, you have people putting out what can look like their perfect life, and they might well be the people struggling. I’d rather read a psychology book for a half hour.

“If I ever do get in a bad state, I have coping mechanisms. As I said, a run or a walk, a chat with herself. I try to not hold onto things — all simple stuff. My role as a medical rep takes me to hospitals up and down the country and I see a lot of people struggling with illnesses, so what I have is fairly small in the larger scale of things.”